Alcoa Inc. (NYSE:AA) and Vale SA (ADR) (NYSE:VALE) are two of the largest metals and mining companies in the world, and both have seen their stock prices fall sharply over the past couple of years: 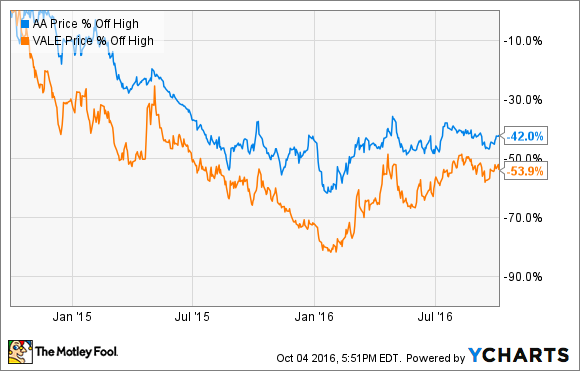 Is there opportunity here for investors? If so, which of these two companies is the better buy? While neither company is a screaming buy today, even with share prices still well below recent highs, Alcoa is almost certainly the better investment, and largely because that company plans to split into two as soon as November.

Here's a closer look at what exactly makes Alcoa the better investment today, as well as one reason why that could change as soon as November.

Besides mining and producing raw materials and metals, Vale and Alcoa have very little in common, making different products with essentially no overlap.

Vale is primarily an iron miner, with iron ore and pellets generating nearly two-thirds of its revenue in the most recent quarter, while nickel, copper, and fertilizers made up most of the balance (pie chart on right below):

From a geographic perspective, Brazil-based Vale counts on Asia for an outsize portion of its revenue. This creates notable short-term risk for Vale, as demand for iron and steel in China is facing heavy headwinds. To start, the domestic steel industry has been producing significantly more steel than the market can support for years, and recent American tariffs on a number of Chinese steel products -- after years of the Chinese government subsidizing Chinese producers -- are likely to further reduce iron demand.

Alcoa, on the other hand, is more than just a miner and raw materials producer. The company is one of the largest integrated aluminum producers in the world, but also manufactures highly engineered aluminum components for the aerospace, automotive/commercial transportation, packaging, and construction industries. And while some of these components are commodity in nature, this part of Alcoa's business has very strong growth prospects and profit potential.

This is a major differentiator for Alcoa versus Vale, which as a raw materials producer will be largely driven by market prices and demand for the materials it produces. And right now probably isn't the best time to be heavily tied to selling iron in Asia.

The best part about Alcoa is its engineered products segment, and on Nov. 1, Alcoa is splitting into two separate companies. Alcoa plans to spin off its raw materials mining and production business, which will be named Alcoa, and rename the remaining company Arconic.

Make sure you understand this part: The company called Alcoa today will be renamed Arconic and will begin trading under the ticker symbol "ARNC" on Nov. 1, while the company that it is spinning off will be a new company but will trade under the "AA" symbol and be called Alcoa. This is important to understand, because if you buy shares today, those shares would become Arconic shares post-separation, while you would receive a distribution of shares for the newly created Alcoa (if it's still unclear, read the link above).

Vale, however, is a potential turnaround play, though there is risk that shouldn't be ignored. For one, the iron business is ugly, with global demand sluggish at best, and prices very, very low: 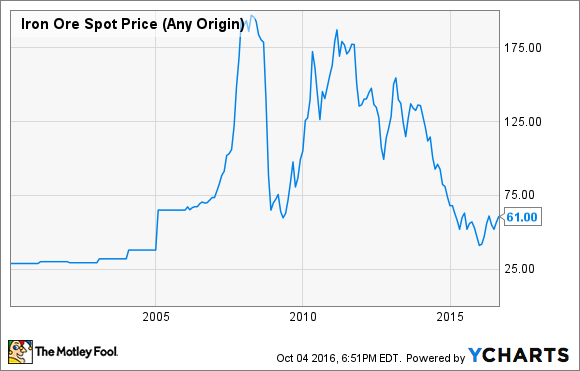 Huge overproduction of both iron and steel products in recent years -- not to mention relatively sluggish demand outside North America -- could also mean prices will stay at these decade-low levels for some time to come. Factor in more than $30 billion in debt and Vale still has a long way to go.

But the company has taken a number of steps to refocus its business, including a recent move to sell part of its interest in a coal mine to raise cash, and could move forward soon to sell its fertilizer business. Vale also recently amended its deal with Silver Wheaton Corp. for the gold stream from its Salobo copper mine, receiving $800 million in cash in trade for agreeing to sell Silver Wheaton 75% of the gold stream for a fixed price going forward. Management says it will reduce its debt by about one-third within the next couple of years, and more moves like this one are likely to be a key source of cash to do so.

The trick will be for management to take enough steps to lock in business and raise cash while not selling off too much of its long-term production for too cheaply.

Better buy? It's a little complicated (but mostly it's Alcoa)

Today, Alcoa is the superior company, with a much lower risk profile and the upside that its engineered products segments offers. Vale's turnaround potential is compelling, but until the debt load starts coming down and global iron prices show more signs of stabilizing and recovering, it's probably best to keep an eye on it and maybe invest when the picture is clearer.

Once Alcoa separates into separate manufacturing and mining/production companies, Arconic (the manufacturer) should stand head and shoulders above either stand-alone miner, whether it's Vale's iron, copper, and nickel business or a stand-alone Alcoa bauxite miner and aluminum producer.