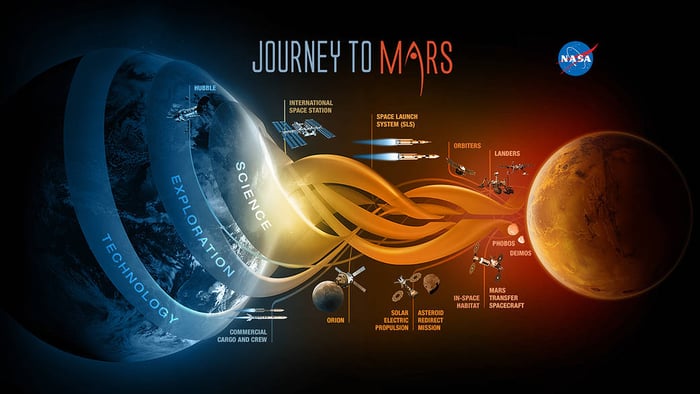 NASA's path to Mars -- and Boeing's -- looks anything but straightforward compared to SpaceX's. Image source: NASA.

It's true. And now, Boeing CEO Dennis Muilenburg has thrown down the gauntlet before SpaceX CEO Elon Musk, declaring: "I'm convinced the first person to step foot on Mars will arrive there riding a Boeing rocket."

Boeing's CEO made this declaration while speaking at The Atlantic's "What's Next?" tech conference in Chicago last week, and it came as a bit of a surprise -- mathematically speaking.

You see, whereas SpaceX plans to send humans to Mars on its own, Boeing's intention is to provide the technology NASA needs to put U.S. astronauts on the Red Planet. Accordingly, Boeing's plan depends entirely on when NASA itself intends to go to Mars -- and last we heard, that wasn't likely to happen before 2033 (with arrival scheduled for 2034).

Compare this to Elon Musk's plan for Mars: Earlier this year, at the Code Conference in Rancho Palos Verdes, Musk promised to put an unmanned Dragon 2 spaceship on Mars by 2018 -- then follow that up with a manned mission to Mars departing in 2024, and landing in 2025.

2034 minus 2025 equals SpaceX beating Boeing to Mars by nine years.

And the first shall be last?

Now, Boeing has been doing this "space thing" a whole lot longer than SpaceX has. It has an established reputation in the field, beginning with the Apollo missions and stretching to present day. At last report, Boeing and its United Launch Alliance partner Lockheed Martin (NYSE:LMT) jointly hold the record for most consecutive rocket launches without mishap: 111 missions and counting. (In contrast, the last rocket SpaceX tried to send into orbit blew up before it was even ready to launch!)

All of that said, SpaceX insists its rockets will be flying again soon, and perhaps as early as November. Unless Boeing and NASA move their timetable significantly forward, SpaceX could once again be on track to beat them.

Where does this leave us? SpaceX says it will get to Mars first; Boeing begs to differ. The truth remains to be seen. But here's one thing both companies agree on: Mars aside, there are some pretty exciting prospects for aerospace right here on Earth.

You see, while Muilenburg's Mars proclamation got all of the headlines last week, what really caught my interest was his mention of other initiatives Boeing is working on. These range from efforts to promote space tourism to the development of "hypersonic aircraft" flying around Earth at speeds much faster than the norm today.

Muilenburg touted the prospect of "supersonic, hypersonic travel, the ability to connect anywhere in the world in a couple hours," through vehicles similar to Boeing's WaveRider hypersonic vehicle (which has been clocked at Mach 5.1). Boeing's ULA partner, Lockheed Martin, meanwhile, is developing a "Falcon Hypersonic Technology Vehicle" that it says could one day fly passengers from New York to Los Angeles in 12 minutes, at speeds up to Mach 20.

This idea jibes with something Elon Musk mentioned as a potential new field of business for SpaceX: point-to-point transport of passengers and cargo via spacecraft.

After listing the businesses SpaceX is already using in order to raise capital for its Mars mission, Musk observed that, in theory at least, SpaceX's Falcon 9 rockets could be used not only to loft satellites into space (and keep them there), but, now that SpaceX has mastered the process for launching and also landing rockets safely, to transport passengers from Earth... back to Earth.

Mused Musk: "Maybe there is some market for really fast transport of stuff around the world, provided we can land somewhere where noise is not a super big deal," such as on a drone ship stationed several miles off the coast.

After all, a rocket that accelerates to Mach 23 to put a satellite in orbit can just as easily use that speed to traverse the globe in minutes -- and land somewhere other than where it started from. "We could transport cargo to anywhere on Earth in 45 minutes at the longest," said Musk. "If we had a floating platform off the coast of, say, New York ... you could go from New York to Tokyo in 25 minutes, or cross the Atlantic in 10 minutes."

Musk's discussion of point-to-point rocket travel in September sounded a lot like what Muilenburg mentioned in October. Different emphases and different vehicles, to be sure -- but the point is the same: Sure, we'll get to Mars eventually. Meantime, if SpaceX, Boeing, and Lockheed keep going the way they're heading, then the idea of booking an hours-long international airline flight could soon seem as silly as boarding an ocean liner to cross the Atlantic.

Hypersonic travel is coming to Earth. And Boeing, Lockheed, and SpaceX are the companies bringing it.