After nixing its merger deal earlier in the year, Baker Hughes Incorporated (NYSE:BHI) is looking to chart a new path toward profitability amid the still very tough oil services market. This past quarter, the company showed that it is on the right track. Lowered costs and a little help from its most critical business segment helped the company post earnings that weren't great, but a marketable improvement from prior quarters.

Let's take a quick look at Baker Hughes' results for the quarter, and at how management sees things shaping up for the rest of the year and beyond.

Unlike results from last quarter, when Baker Hughes used the large cash payment Halliburton (NYSE:HAL) paid for terminating their merger to offset some very large asset writedowns and goodwill impairments, this quarter's results were much easier to understand. While the company did see a large decline in earnings from this time last year, $321 million in impairments and writedowns impacted the bottom line. Without those losses, the company would have basically broken even on an operating-profit basis and would have improved rather significantly from this time last year. That is even more remarkable when you consider that revenue was down 38% over that same time frame.

The biggest reason for the improvement was mitigating the losses in its North American segment. Historically, this has been Baker Hughes' largest business segment, but it has fallen on hard times because of the decline in shale. Now that shale development is back on the upside, it's starting to narrow those losses pretty quickly.

The one downside is that as shale picks back up, work with longer development cycles, like offshore, is still weakening. This offset some of the gains that North America made in the quarter, but it shows up the most in the results for the Europe/Africa/Russian Caspian region, which has a considerable offshore portfolio: 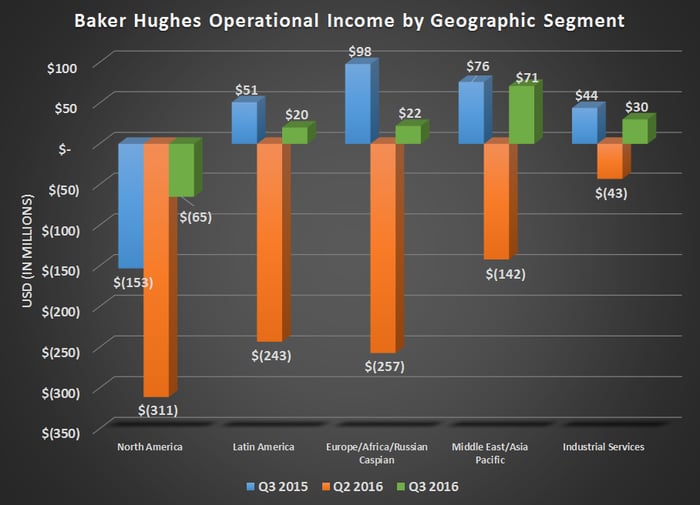 The biggest reason for these improvements, though, was the company's cost-cutting efforts. This was a bit of a concern last quarter, as the longstanding merger agreement with Halliburton prevented the company from making some necessary cuts to its cost structure. At the time, management laid out a plan that would take out about $500 million from its annual cost structure; it now appears that the company is doing even better. According to CEO Martin Craighead, the company is ahead of that goal, and has upped its cost-cutting efforts to $650 million on an annualized basis.

Now that all the flirting with Halliburton has been put to rest, Baker Hughes can focus on execution -- something it will need to do well. According to Craighead, the company will have to deal with the challenges of meeting increasing demand in North American shale while scaling back operations internationally:

Looking ahead, in the fourth quarter of 2016 we expect activity in North America to modestly increase, as our customer community slowly begins to ramp up activity in what remains a tough pricing environment. Internationally, we are forecasting activity declines and pricing pressure to continue, with minimal year-end, seasonal product sales unlikely to offset those declines.

While we expect the market conditions to remain challenging near term, the structural changes we implemented in the past six months have created a stronger foundation for delivering on our objectives and positioning the company for growth.

Like Halliburton, Baker Hughes has a larger exposure to North American shale, so coming quarters will likely result in some decent upticks there that should help improve results. The big question will be whether gains in North America will be enough to offset expected declines in the rest of the business. Luckily for investors, management has used its influx of cash rather smartly: It reduced debt enough that it is in pretty decent balance-sheet shape, and left plenty of cash on the books to pursue some new opportunities if they were to arise.

The most encouraging aspect of this quarter's results: the cost-control efforts. By continuing to cut costs at this rate, the company could return to profitability much faster than just six months ago. If Baker Hughes is on your radar, then watch its next quarter or two to see if these cost-control measures can take hold.