Ford's all-new 2017 Super Duty pickups will be very profitable in time. But the costs of their launch, including a revamp of this Kentucky factory, weighed on the Blue Oval's third-quarter results. Image source: Ford Motor Company.

That was roughly in line with the expectations that Ford executives had set for investors. Ford said that its third-quarter profit would be relatively thin due to the costs of launching its all-new 2017 Super Duty pickups in the U.S.

But other factors, including a dip in sales, weighed on Ford's third-quarter earnings as well.

How Ford's business units fared during the third quarter

Ford's North America unit earned $1.3 billion before taxes. That was down a significant $1.6 billion from a year ago, largely because of four factors:

Ford's South America unit lost $295 million before taxes, versus a $163 million loss a year ago. Weak economic conditions and currency inflation in key South American markets has made for tough going for Ford. $176 million of the year-over-year decline was due to inflation and currency effects, despite higher net pricing. But there was some good news, too: Ford's team in the region found $96 million in cost reductions to help offset the deterioration.

Looking ahead to next year, Shanks said that Ford is cautiously optimistic about the outlook for Brazil in particular, and it's possible that Ford's performance in South America will begin to improve from here.

Ford Europe earned $138 million before taxes, up from a $9 million profit a year ago. Wholesale shipments were down 15% during the quarter, and Ford's market share in the region was flat -- but its share of the profitable commercial-vehicle market was up sharply. Shanks said that Ford took steps to reduce dealer stocks in the U.K. in expectation of weaker sales following the "Brexit" decision, but sales have so far remained steady.

Improvements in pricing and a net $75 million in cost reductions were more than enough to offset the effects of lower sales volumes.

Ford's Middle East and Africa unit is small, but expected to grow over the next decade. It lost $152 million before taxes, down from a $15 million loss a year ago, on weakness in key Middle East markets such as Saudi Arabia. Shanks said that the market factors driving this quarter's loss would likely abate somewhat in the fourth quarter.

Ford's Asia-Pacific region includes its sizable Chinese operation. The unit earned $131 million before taxes, up from $22 million a year ago. Revenue increased 16% to $3.1 billion on a 30% jump in wholesale shipments.

After underperforming in the first half of 2016, Ford's sales in China were up sharply in the third quarter. Price cuts helped boost sales, but Ford was able to more than offset the profit effects of the price cuts with cost reductions. Ford's joint ventures with Chinese automakers generated $320 million in equity income in the third quarter, up 26% from a year ago, with a margin of 13.4%.

Ford Credit, the Blue Oval's in-house financing unit, earned $567 million before taxes, up 5% from a year ago. Net receivables were up 9% from a year ago, in line with expectations, and credit performance remained solid. But lease residuals deteriorated slightly, on expectations of a decline in auction values for vehicles coming off lease as automakers increase incentives on new cars.

Ford had negative $2 billion in operating cash flow related to its automaking business, down from a positive $2.8 billion a year ago. The difference was due to lower pre-tax profits, $1.7 billion in capital spending, and unfavorable timing of supplier payments versus a year ago. Ford paid about $600 million in dividends during the third quarter, and contributed another $200 million to its pension funds.

Ford stood by its full-year overall profit guidance as revised in September. 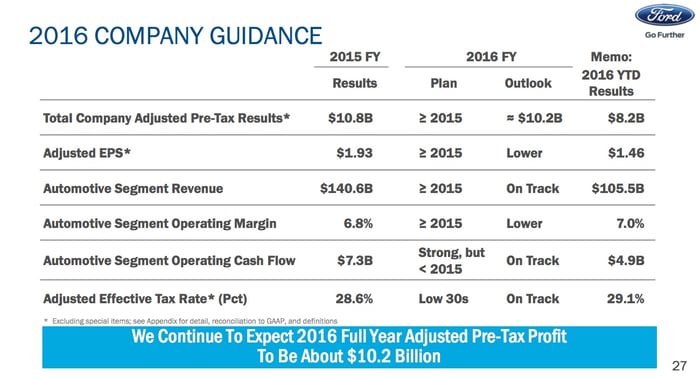 Ford still expects to earn about $10.2 billion in adjusted pre-tax profits in 2016. That's down from $10.8 billion in 2015, but it would still be one of the most profitable years in Ford's history. Through the first three quarters, the company has earned $8.2 billion on that basis.