Ford Motor Company (NYSE:F) said on Thursday that its third quarter net income dropped 56% from a year ago, to $957 billion.

Excluding one-time items, Ford earned $0.26 per share, just half of its $0.52 year-ago result. That actually beat Wall Street's pessimistic expectations, but it has Ford investors concerned: Is the Blue Oval's profitable ride starting to stall?

To try to answer that question, let's start by taking a look at Ford's results in North America, which came in far below what people have come to expect.

Ford's North America unit earned $1.1 billion before taxes in the third quarter. That's not bad, but it's down from $2.8 billion a year ago, accounting for much of the company's overall profit drop.

Of more concern was the Blue Oval's operating profit margin in the region, which was just 3.3%. The public has become used to margins much closer to 10%.

So what happened? Take a look at this slide, which "walks" from Ford's year-ago result in North America to the most recent quarter's result. 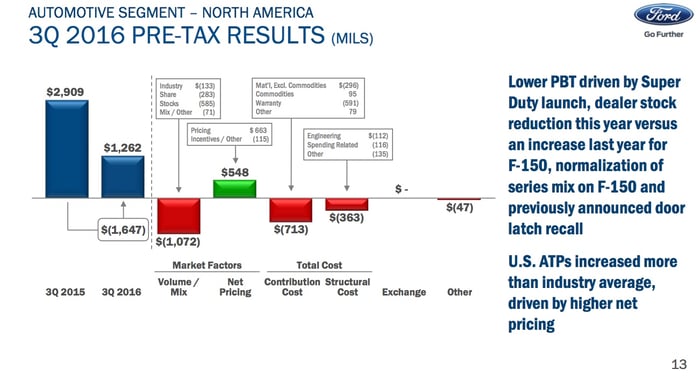 That's the story. Here's the question shareholders need to ask: Which of those factors, if any, will be a concern on an ongoing basis?

How much of this will be a concern in future quarters?

We don't need to worry about the recall going forward. Recalls happen, and they're sometimes costly, but this one won't generate an ongoing bill.

Tight supplies of the new Super Duty almost certainly extended into the fourth quarter. But production should be up to full speed soon, and full inventories will follow.

The new Super Duty may not be quite as profitable as its predecessor, at least in the near future. The outgoing Super Duty was an old design. Its development costs were paid off long ago. It'll take a few years for the new one to get to the same point. But the new Super Duty is receiving good reviews, and it should sell well at good prices, generating solid profits.

Alas, the "normalization" of F-150 revenues is something that won't change. The good news is that even "normalized," the F-150 is still a very profitable product. And Ford's average transaction prices have been strong. But it won't generate the outsized profits seen in the first months after it was launched, when demand for top-tier models was exceptionally high.

Long story short: Next quarter should be better, but...

CEO Mark Fields emphasized on Thursday that Ford is still on track for a very strong year, one of its best ever in terms of profits. That's true, and it's important to remember. But Fields also acknowledged that the U.S. market is becoming a "tough and more competitive pricing environment."

"We don't see a recession on the horizon, but we do see a marketplace that, from a cycle standpoint, has matured," Fields said during Thursday's earnings call.

Translation: Ford's most profitable products are still selling well at good prices, without big incentives. But sales growth will be harder to find, and competition could force Ford to choose between discounts and production cuts.

So far, the choice has been clear: Ford's incentives have been fairly steady, but it has already made moves to trim production. It said on Thursday that it has reduced its fourth-quarter production forecast for North America by 12.5%. The goal is to preserve good profit margins even if sales fall. We'll see how well that works over the next few quarters.