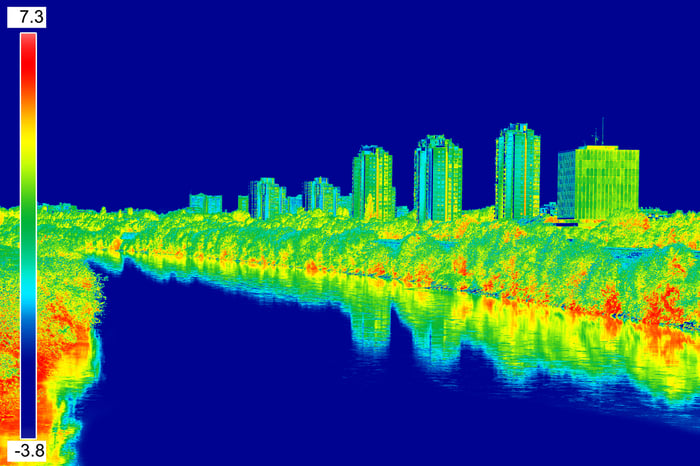 Infrared sensing is FLIR's business, and business is getting ready to boom. Image source: Getty Images.

It was a mystery wrapped in an enigma enshrouded in an 11% jump in stock price.

Last week, see-in-the-dark specialist FLIR Systems (NASDAQ:FLIR) reported fiscal third-quarter earnings of $0.43 per share -- one penny short of Wall Street estimates. Yet FLIR stock immediately soared on the news, and ended the week up more than 11% from its pre-earnings price. So what was all the fuss about?

For its fiscal third quarter 2016, FLIR reported sales growth of just 6%, for $1.19 billion total, but only $0.43 per share in net profit. Not only was this a penny short of estimates, but it was actually 17% less profit than FLIR had earned one year prior.

Granted, management called the results "in line with our expectations," and in particular reminded investors that it had expected to see "continued softness in our Security segment's retail channels." So perhaps the profits news wasn't quite as big a disappointment as it appeared at first glance. At the same time, management didn't raise guidance a whit, saying instead that it only "continues to expect revenue in 2016 to be in the range of $1.6 billion to $1.65 billion and adjusted net earnings to be in the range of $1.60 to $1.65 per diluted share."

And yet investors didn't just stoically endure these results. They went downright wild over them, and bid up FLIR stock strongly. So what was it that investors found so very encouraging in last week's report? There were actually two items worth highlighting.

No two ways about it: GAAP earnings at FLIR last quarter were miserable. At the same time, though, FLIR's cash flow statement shows that the company generated $88.6 million in cash from operations during the quarter and spent just $6.8 million on capital improvements. That yielded $81.8 million as real free cash flow -- cash profits nearly 40% above the $58.6 million in net income the company reported, and 51% better than what the company produced one year ago.

As a result, FLIR has more than repaired the disconnect between reported GAAP earnings and actual free cash flow profits that we saw last year. As of today, the company's trailing free cash flow of $248 million dwarfs reported income of $175 million. And as a result, FLIR stock that appears at first glance to sell for a pricey 26 times GAAP "earnings," actually costs just 18 times free cash flow.

And focus on growth

If you factor the company's net cash into the picture, FLIR stock is even cheaper than that. In fact, I calculate an enterprise value-to-free-cash-flow ratio of just 17.6 on FLIR stock. For a company paying a 1.5% dividend yield and, according to analysts cited on S&P Global Market Intelligence, expected to grow its profits at 15% annually over the next five years, that's not a bad price at all.

Of course, this does raise the obvious question of whether FLIR can in fact grow at 15% -- which brings us to our second important number in the earnings report: backlog.

FLIR management noted that backlog at the company currently stands at $644 million, which is up 2% sequentially, and up 13% from this time last year. This implies that the 6% sales growth we saw in Q3 is not nearly representative of the rate at which FLIR can grow. With backlog growing strongly, sales are sure to follow. And with just a bit of margin improvement, I see no reason why FLIR cannot hit the 15% profits growth target that Wall Street has set for it.

In a nutshell, is FLIR as good a bargain today as it was last week, when it sold for 11% cheaper? Of course not. But even at today's valuation, the stock's not a half-bad bet. And with even just a little of a pullback, it could become an obvious buy.