Please ensure Javascript is enabled for purposes of website accessibility
Log In Help Join The Motley Fool
Free Article Join Over 1 Million Premium Members And Get More In-Depth Stock Guidance and Research
By Beth McKenna – May 6, 2020 at 9:54PM

The thermal camera maker ended the quarter with a big backlog for elevated skin temperature cameras, which are being used in the fight against COVID-19.

Shares closed up 9.6% on Wednesday. We can attribute the stock's gain to revenue beating Wall Street's expectations and a record backlog, thanks largely to continued robust demand for the company's thermal cameras for use in elevated skin temperature (EST) screening. These cameras are being used by companies to screen employees and customers for EST, which may be indicative of a fever -- a common symptom for people infected with the novel coronavirus.

Here's how the quarter worked out for FLIR and its investors. 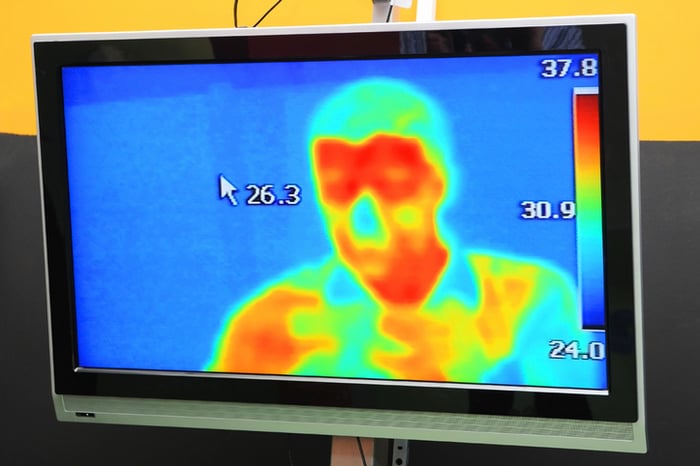 Wall Street was looking for adjusted EPS of $0.42 on revenue of $438.4 million, so FLIR hit the profit expectation on the bull's-eye and exceeded the top-line estimate.

The company ended the quarter with a record backlog of $859.3 million, up 2.8% year over year.

The industrial technologies segment's revenue increase was primarily due to higher demand for EST cameras, driven by the COVID-19 pandemic. This was partially offset by lower sales in the company's maritime products, security products, and cooled cameras, also driven by the pandemic, which in mid-March began shuttering many commercial and industrial operations around the world. The segment's operating profit decline was largely due to a non-cash loss on the disposal of equipment and a change in product mix.

Segment backlog was up a whopping 28.3% year over year to $330 million, driven by strong demand for EST cameras.

In the defense segment, the revenue increase was mainly due to the contributions two acquisitions -- Aeryon Labs and Endeavor Robots -- made to unmanned systems and solutions. This was partially offset by the completion of some contracts that added revenue to the year-ago period. The segment's operating profit decline was largely driven by a shift in product mix and an increase in research and development (R&D) costs.

Segment backlog declined 8.6% to $529.3 million, primarily because of "order and subsequent deployment timing for a few major programs," the company said in the earnings release.

[W]e continue to experience increased demand for our thermal cameras for use in Elevated Skin Temperature -- or EST -- screening. Although these thermal cameras cannot detect or diagnose any type of medical condition, the cameras do serve as an effective tool to identify elevated skin temperatures through accurate, non-contact temperature monitoring. ...

While it is still too early to estimate longer term demand for our EST screening technology, sales of these products have offset other headwinds to our business resulting from the pandemic. Consistent operational execution contributed to FLIR delivering revenue and adjusted diluted earnings per share at the higher-end of the expectations we provided for the first quarter. ...

Although our first quarter bookings faced a difficult year-over-year comparison, we were pleased to end the quarter with a record total backlog of $859.3 million.

Management pulled its previously issued 2020 guidance in light of the uncertainty surrounding the pandemic. This was to be expected, as most companies are doing the same.