Fitbit's (NYSE:FIT) stock has been erratic in the past few years, with new lines of wearables often pushing share prices up, while renewed concerns over competition and pricing pressure push it back down. This is a trend that's been true throughout most of Fitbit's short stock history. Here's an analysis of Fitbit's stock performance, and some ideas about where it might go from here.

Fitbit has competition from some big-name players. These are not only similar wearables companies such as Garmin (NASDAQ:GRMN), but also increasingly tech companies such as Apple (NASDAQ:AAPL) and fitness companies such as Under Armour (NYSE:UAA)(NYSE:UA) -- each with much bigger pocketbooks to expand wearables. Then there are the lower-cost alternatives, such as China's Xiaomi, with its $15 trackers.

Fitbit is still the market share leader in wearables, and also one of the fastest growing in the segment in the past year. The most recent numbers from the IDC, the main resource for tracking wearable shipments, reported Fitbit at about 25% global market share as of Q2 2016. Its year-over-year growth was faster than Xiaomi's, and the Apple Watch shipments have fallen drastically -- though that was before the recent announcement of the Apple Watch 2 that became available in October.

Fitbit's stock has been volatile since going public in June 2015. After the stock's initial public offering of $20 a share, its price more than doubled to $50 in just two months. However, from there the stock has dropped (though with short stints going back up) to its current price around $13. 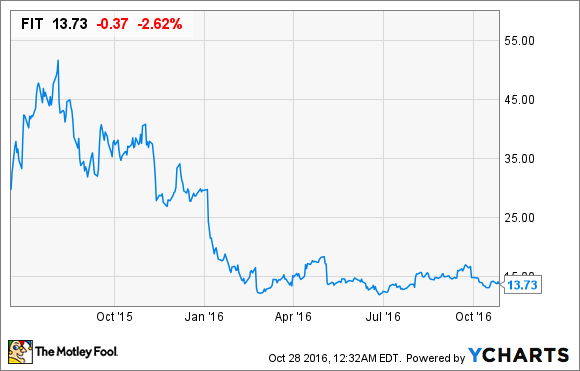 By valuation, the stock has also been erratic. The company's price-to-earnings (P/E) multiple has been impacted by Fitbit's increasing outlay in sales, general and administrative, and research and development costs, which have risen 84% and 161% respectively year-over-year. This -- coupled with the fluctuating share price -- has resulted in the stock's P/E ratio swinging as much as 30% either way within just a few weeks throughout the past year. 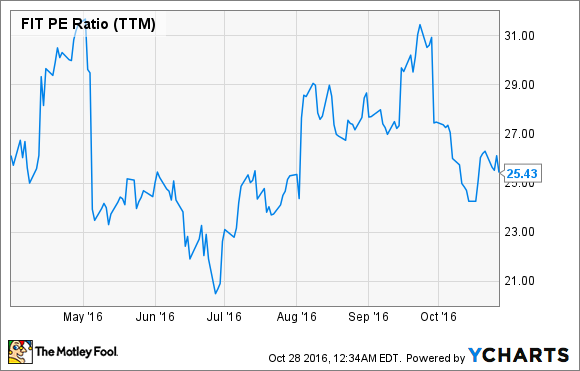 Where Fitbit could go from here

Other than its growing competition, Fitbit has some serious hurdles to overcome. The accuracy of its monitors is one such recurring challenge. An October report by HealthDay showed that heart and vascular researchers at the Cleveland Clinic found the devices to be fairly inaccurate after conducting various tests. Fitbit denied the results, saying that its own results showed only a small margin of error, but the brand's reputation is still coming into question every time a report like this comes out.

In terms of new products, Fitbit has seen a strong sales surge from its newest products, including upgrades to its classic Charge tracker, as well as the newer smartwatch-like Blaze, which features a full touchscreen face. Fitbit is spending massively in R&D to try to continually put out upgraded devices, even if the brand isn't venturing far outside the wrist-based fitness tracker. And while Fitbit's market share has diminished -- it was an estimated 33% worldwide in 2014 Q3 -- this comes at a time when the market itself looks to be growing rapidly. Analysts at Scalar Market Research expect the market to grow 138% by 2021 $71 billion.

Finally, valuation: Fitbit's share price has dropped more than 50% in 2016, and though its P/E is not cheap at 25, its forward P/E of just 9.5 looks like value in this expensive market. Furthermore, analysts expect 2016 revenue to grow 39% over 2015. It's easy to point to Fitbit's risks and conclude that its stock will continue falling -- but this company has been doing something right recently with its growing sales and increasing market share in the face of intense competition. For that, and at this new low price, Fitbit stock could be a healthy choice.