Ford Motor Company (NYSE:F) warned investors that its third-quarter profit would be down quite a bit from its year-ago result. That warning turned out to be accurate, as the Blue Oval's $957 million third-quarter net profit was down 56% from a year ago.

Much of that had to do with events in North America, where a slowing market and some hefty one-time costs put big dents in the bottom line. The story was considerably better in Europe, where a restructuring effort begun way back in 2012 is now bearing profitable fruit.

After years of losses, good news for Ford from Europe

Ford endured several years of billion-dollar-plus losses in the Old World as it worked to restructure its operation, following a restructuring plan set in motion by now-retired CEO Alan Mulally back in 2012.

That restructuring effort has been a success. Ford Europe earned $138 million before taxes in the third quarter, up from just $9 million a year ago. Through the first three quarters of 2016, Europe has generated just over $1 billion in pretax profit for Ford. 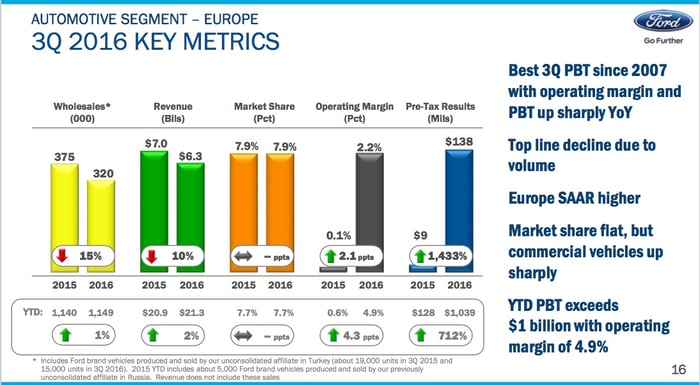 CFO Bob Shanks explained that while sales volumes and revenues were down year over year, the third quarter was still a very good one for the Blue Oval in Europe:

It was the best third quarter that we've had since 2007. If you look at the operating margins and profits, up very sharply. I'm going to go right to the year-to-date numbers at the very bottom of the chart to the far right. We have already earned in the quarter or in the year over $1 billion, and that number will get a bit better as we go through the fourth quarter. So we feel extremely good about what's happening in Europe.

Why were Ford's wholesales down? As Shanks said, preemptive actions in the wake of the U.K.'s decision to leave the European Union were a big factor:

[Ford's management team in Europe] has done a wonderful job, and it's showing up in the results. And that's despite the fact, if you go to the left, you'll see we're starting to take actions in response to anticipated reductions in demand in the U.K. as OEMs start to price in a response to the weaker sterling. We certainly announced a price increase; a number of others have. In the quarter, our wholesales were down, our revenue was down. That was driven by those actions. Although actually, in the quarter, the SAAR ["seasonally adjusted annualized rate," a measure of the pace of auto sales] of U.K. was unchanged. But we think that will change over time as those price increases start to take hold.

Here's a look at the factors that drove Ford's $129 million year-over-year profit jump: 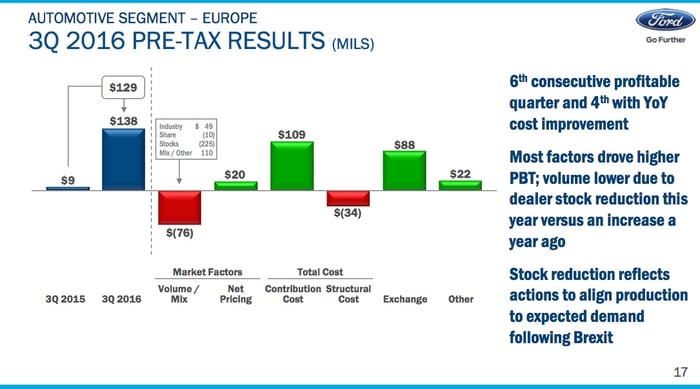 Shanks explained that the impact of the moves that Ford made in response to Brexit were more than offset by other favorable factors, including a very profitable "mix" of products sold during the quarter:

You can see the impact of the [Brexit-related inventory adjustments] in terms of the volume. We did continue to see very, very strong mix that was both favorable product mix as well as series mix and options. Good cost performance on contribution cost that was driven by material. Good news on exchange. We're fully hedged on an operating basis. This is the nonrecurrence of bad news on the balance sheet a year ago.

That "bad news" a year ago was $115 million in costs related to Ford's restructuring effort in Russia, where a steep recession has clobbered new-car sales. Shanks explained that some early signs of recovery are now becoming visible in Russia:

One other thing I just want to highlight is all the way through here, in various categories, we're seeing continued positive performance on a year-over-year basis of our Russia business. So Russia seems to be recovering a bit ahead of where South America is. But I'm very pleased to see the continued performance by the team in that part of our business.

How Brexit is coloring Ford's outlook for Europe

CEO Mark Fields had some additional thoughts on Brexit's impact:

As Bob mentioned, so far we haven't seen a major impact on the industry [from Brexit]. We've seen retail [sales] down slightly, but that's offset by increasing fleet deliveries. In fact, if you peel that back a little bit, we've seen a lot of strength in the commercial-vehicle market and especially the van market. That obviously plays to our strength with Transit, which, once again, was the number-one-selling commercial vehicle in the U.K., and also across Europe.

What we are watching, though, is pricing. As Bob mentioned, we, as well as our other competitors, have [increased prices] in the U.K. That's obviously to compensate for the weakening of the sterling. Our view is that this is what will start to be a negative for the market as we close this year and we get into 2017. So we're getting ahead of that, as Bob mentioned, from our [moves to reduce production].

That may make for a weaker fourth-quarter result. But Ford has already earned $1.04 billion before taxes in Europe through the first three quarters of 2016. It should be no surprise that Shanks guided to a "significantly stronger" full-year result than the $259 million before taxes Ford earned in Europe in 2015.