This time of year is a sort of holiday for income investors. It is, of course, the final earnings season of calendar 2016. Since many companies raise their dividends during such times, certain shareholders will soon receive nice cash presents from their investment.

Last week, another bunch of stocks made like Santa and bestowed gifts on their investors. Here's a trio of these givers.

Mighty telecom stalwart AT&T (NYSE:T) is the first of two stocks in this week's lineup that is a dividend aristocrat. In other words, it's raised its payout at least once annually for a minimum of 25 years running.

AT&T is maintaining its aristocrat status with a 2% bump in its quarterly distribution to $0.49 per share.

That follows a Q3 that saw decent, if unspectacular, year-over-year increases in revenue and net income (to $40.9 billion and $3.3 billion, respectively). What's more of a concern for the investing public, of course, is what lies ahead for the company.

Already fattened with the recent absorption of satellite broadcaster DirecTV, it's aiming to expand in the content sphere by acquiring Time Warner in a huge deal potentially worth about $85 billion. This is already facing some potential roadblocks from regulators, so even if it goes down it won't be easy.

Such a buy would, of course, impact AT&T's finances considerably, putting the dividend's future in some doubt.

Ultimately, however, it's clear that one of the company's big investor priorities is the payout -- it's one of the best yields among the blue chips, after all, and what attracts many to the stock. So no matter how the Time Warner saga goes, I feel it'll be secure going forward. 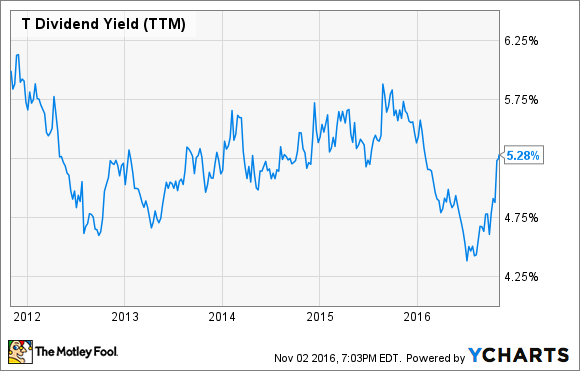 AT&T's new dividend will be paid next Feb. 1 to shareholders of record as of Jan. 10. At the most recent closing stock price, this would yield a rich 5.4% -- significantly higher than the current 2.1% average among dividend-paying stocks on the S&P 500.

No. 2 of our pair of dividend aristocrats this week is apparel maker V.F. Corporation (NYSE:VFC), which controls notable fashion brands Wrangler jeans, Vans shoes, and North Face adventure wear. The company is lifting its quarterly dividend by 14% to $0.42 per share.

That might help juice the stock price, which has declined by 20% over the past year. Investors are understandably skeptical that the company can hit its stated goal of $17 billion in revenue by next year. 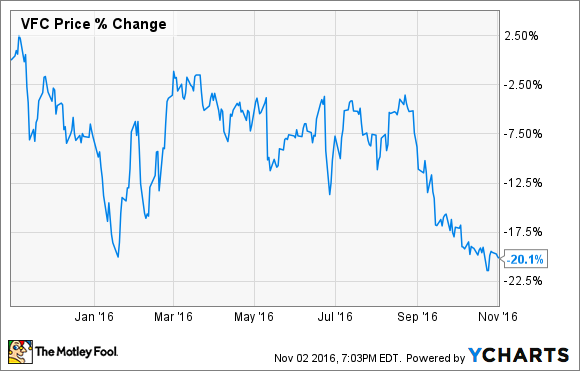 Compounding that, V.F. Corporation posted a slight (1%) year-over-year decline in revenue to just under $3.5 billion in its most recently reported quarter.

On the bright side, the company's net profit for the period was 8% higher at nearly $500 million, convincingly beating the average analyst estimate. And in contrast to the declines recorded in the North Face and Timberland brands, Vans' sales increased by an encouraging 7%.

I think the market's punishing V.F. Corporation a bit unfairly; it's a sturdier company than many give it credit for. That said, if I were an investor I'd be concerned by its spending on dividends and share buybacks -- last year, for example, they exceeded free cash flow. Hopefully the company will be able to right the ship, and keep its dividend raise streak alive regardless.

V.F. Corporation's raised distribution is to be handed out on Dec. 19 to investors of record as of Dec. 9. It would yield a theoretical 3.1% on the current share price.

Funnily enough, the top raiser among our trio is the one that isn't a dividend aristocrat. It's chip maker Texas Instruments (NASDAQ:TXN), which is raising its quarterly payout a beefy 32% to $0.50 per share.

Texas Instruments might just be shooting for eventual aristocrat status, though -- this raise makes it 13 years in a row that the company has lifted its distribution. 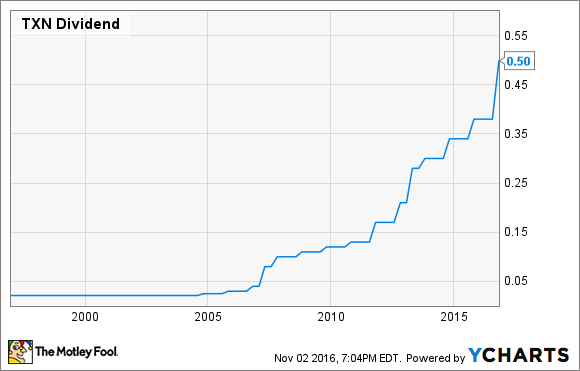 The company's lineup of relatively low-cost analog and embedded chips isn't the sexiest product mix in the IT sector, but it sure makes for a good business. In the most recently reported quarter, Texas Instruments delivered year-over-year growth of 7% on the top line (to almost $3.7 billion), with a strong 21% rise in net profit, to $968 million.

As the results go, so goes the dividend. The company is committed to returning 100% of its free cash flow in the form of dividends and stock repurchases. In other words, it's a very income investor-friendly enterprise.

And although Texas Instruments' products aren't particularly glamorous, they're necessary for an ever-widening range of instruments and processes. Given that, I think the company will continue to do well, and I wouldn't be surprised to see more large-scale dividend raises in the future.

Texas Instruments will pay its raised dividend on Nov. 21 to stockholders of record as of Nov. 7. At the current share price, the new payout would yield 2.9%.