An upheaval in the energy sector over the past two years has led to an adjustment in how safe investors think energy dividends are. Oil and gas producers, midstream companies, and even utilities with once-safe dividends have reduced or eliminated them in an effort to save cash and simply survive.

One area in energy where dividends are rock-solid and actually poised for growth is in renewable energy yieldcos. And there are a few stocks investors should take a hard look at while the sector is down.

When the yieldco industry first began, NRG Yield (NYSE:CWEN) was one of the first entrants. And it took a slightly different path from the one taken by many of its younger peers.

Instead of focusing solely on renewable energy, NRG Yield bought some fossil fuel assets along with wind, solar, and geothermal projects. It's remained focused on assets with consistent contracted cash flows that can lead to dividend growth for investors.

What's encouraging right now is that assets are performing well and expected cash flow is growing. Management recently increased 2016 EBITDA guidance by $80 million to $885 million, and said cash available for distribution (CAFD) will be $25 million higher than previously expected at $290 million.

Its broad range of assets and geographic diversification gives NRG Yield a solid foundation, and the 6.5% dividend yield is a great payout for investors today.

NextEra Energy Partners (NYSE:NEP) is a renewable energy-focused yieldco that was launched by the utility giant NextEra Energy. As you can see below, it owns wind and solar assets across the country, all of which hold long-term contracts to sell energy to utilities. 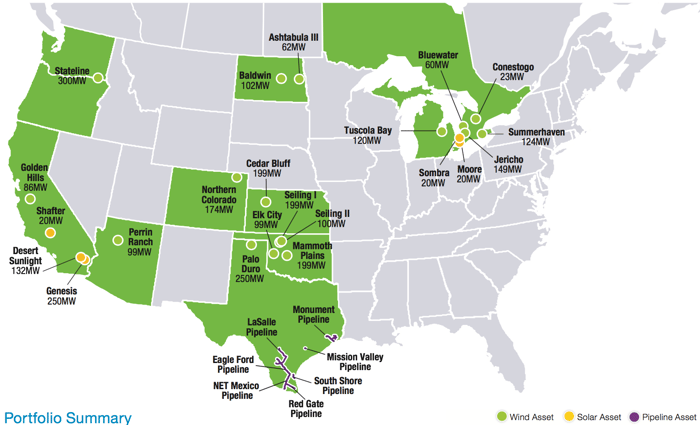 Two of the biggest solar companies in the world -- First Solar and SunPower -- launched yieldco 8point3 Energy Partners (NASDAQ:CAFD) last year as a preferred place to sell assets and hold them long-term. The company only buys solar assets from its sponsors, and maintains relatively little debt compared to some competitors. That discipline and a dual sponsor structure provide lower risk for investors.

Despite the low risk, the dividend yield for 8point3 Energy's shares currently stands at 7.4%, and the first few years of payments won't even be taxable income. As the company buys more projects it's also expecting the dividend to grow 12% to 15% over the next few years, and with high quality assets this is a dividend investors can count on for years to come.

The wind-focused yieldco on this list is Pattern Energy Group (NASDAQ:PEGI), which owns projects in the U.S., Canada, and Puerto Rico. The company can opportunistically buy assets as they become available because it has a private sponsor, as opposed to public sponsors, which must show consistent growth.

There are already 2,644 MW of assets already on the books today, and management has another 942 MW in a right of first offer portfolio. If acquired at the right price, they'll keep the dividend growing long-term. With a lofty dividend of 8.4% today, investors have a strong yield already, and with management able to buy projects at attractive prices as they come available the company is well positioned for the future.

The final yieldco on my list is Hannon Armstrong Sustainable Infrastructure Capital (NYSE:HASI), a company that buys wind, solar, and efficiency assets. Like Pattern Energy, Hannon Armstrong isn't tied to a sponsor's assets, and can buy everything from large wind and solar farms to small solar projects or efficiency projects.

A pipeline of over $2.5 billion in potential projects should keep the portfolio and dividend growing long-term. And with shares currently yielding 5.9% the stock has both a strong dividend today and growth opportunities for the future.