Stephen D. Simpson, Simpson,
(XMFWildWeasel)
Author Bio
I'm an ex-Wall Street sell-side and buy-side analyst who has spent most of the last 10 years writing on a wide range of industries and investment ideas.

Celgene (NASDAQ:CELG) has done what many biotechs can only dream of: establish itself as a major player in oncology with one of the best-selling drugs in the industry.  . This drug, Revlimid, anchors the company's hematology business with over $6 billion in revenue and the possibility of further label extensions. While $6 billion sounds impressive, Celgene is just getting started. On the heels of Revlimid's success, Celgene is pursuing clinical trials of multiple blood cancer drugs that could ultimately be a $20 billion opportunity. 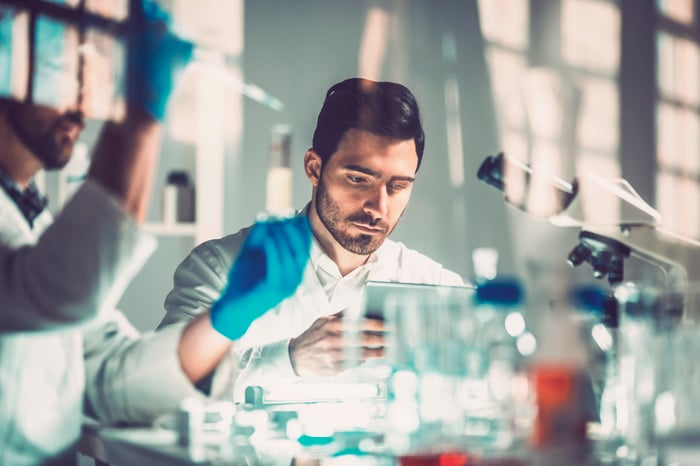 A powerhouse in IMiDs

Celgene has created an uncommonly successful oncology franchise on the back of its development of immunomodulatory drugs (IMiDs), which treat diseases by enhancing the body's own immune system. Thalomid was an early success for Celgene, approved in 2006 for multiple myeloma, but Revlimid (also an IMid), has gone on to surpass it. Revlimid is now the drug of choice for multiple myeloma -- a type of cancer that, before Thalomid and Revlimid, had a poor prognosis.

Now the question for Celgene is whether it can expand this franchise even further and substantially boost revenue before Revlimid loses patent protection in 2022. Celgene has launched numerous studies of Revlimid in other types of blood cancer (lymphoma and leukemia) in the hopes of adding those incremental billions of revenue dollars.

So far, the results have been mixed. The results of the REMARC study of Revlimid in diffuse large B-cell lymphoma were disappointing, erasing as much as $2 billion in potential peak sales, but there are still ongoing late-stage Revlimid studies in follicular lymphoma, relapsed/refractory indolent lymphoma, and second-line chronic lymphocytic leukemia.

Revlimid and Thalomid are not the only efforts Celgene has ongoing in IMiDs. Pomalyst is currently annualizing over $1.2 billion in revenue as a second-line treatment for multiple myeloma, with a growth rate of 33% in the third quarter that suggests $2 billion or more in peak annual revenue is attainable.

Going a step further, Celgene has a new type of IMiD, called CC-122, in phase 1 trials. CC-122 seems to have a greater affinity for cereblon, a protein that is significant in allowing myeloma cells to proliferate, and it could prove to have significant efficacy in some types of leukemia and lymphoma. While it's too early to call CC-122 the next Revlimid, strong clinical data relative to Revlimid would put the prospect of replacement on the board.

While not an IMiD, Celgene has also developed CC-486. This drug is an oral form of azacitidine that the company hopes could build upon Vidaza, a moderately successful drug approved for myelodysplastic syndrome (MDS) and some forms of acute myeloid leukemia. Given the convenience of oral dosing, over $1 billion in potential sales is not unreasonable if the efficacy and safety are there.

Celgene has not been shy about forming partnerships over the years and has made well over a dozen private-company investments over the last 10 years. While not all of the drugs included in these partnerships will make it to market, and Celgene will make less from them than they would from their own internally developed drugs, they have an important role to play in rounding out, securing, and extending Celgene's status as a leading hematology-focused oncology company.

Realizing the disruptive potential for immuno-oncology, Celgene has formed partnerships with AstraZeneca, Juno Therapeutics, and bluebird bio. Astra's PDL-1 antibody durvalumab will be studied as a combo agent with existing drugs such as Revlimid; although there haven't been a lot of clinical data yet on PD-1/PDL-1 drugs in hematology, they have already made a splash in other difficult-to-treat cancers and have a mechanism of action that would make sense as potential combo-therapy agents. With Juno and bluebird, Celgene gains some access to the once-hot field of CAR-T therapies, an expensive but very promising approach to highly refractory types of hematological cancers.

Because of earlier diagnosis, more effective drugs, and patients living longer before becoming refractory to therapies, the overall hematological oncology market is growing at double digits and could be worth close to $40 billion in 2020. Between Relivimid, Pomalyst, Vidaza, and experimental compounds such as CC-122, AG-221, and durvalumab combos, as well as new approaches such as CAR-T, Celgene has a credible path forward to grabbing at least 50% of this market and seeing $20 billion in hematology revenue by 2020. While the need to make royalty payments if drugs like durvalumab prove successful will put some pressure on Celgene's margins, the 50%-plus adjusted operating margins that Celgene currently enjoys gives the company a lot of room to maneuver in search of more revenue growth.

Not all of these programs are going to work, and Celgene is certain to face competition as companies such as Kite Pharma and others look to advance novel therapies for hematological cancers. In the meantime, though, Revlimid has vaulted Celgene into the big leagues of oncology and given the company the platform, credibility, and cash flow to invest in research and form partnerships that should extend the company's leadership into the next decade.