Please ensure Javascript is enabled for purposes of website accessibility
Log In Help Join The Motley Fool
Free Article Join Over 1 Million Premium Members And Get More In-Depth Stock Guidance and Research
By John Rosevear - Nov 27, 2016 at 11:05AM

The German giant has an ambitious plan to move on from its diesel-emissions scandal and become a major player in the U.S. market. Should investors buy it?

Volkswagen AG (VWAGY -2.47%) isn't giving up on the United States. The German auto giant said this past week that it's planning an aggressive new offensive for its namesake brand, aiming directly at General Motors (GM -2.19%) and Ford Motor Company (F -3.20%) with a slew of new SUVs and battery-electric models.

An ambitious global plan to boost the struggling VW brand

Volkswagen's plan for the U.S. is part of a major global overhaul plan called TRANSFORM 2025+. The plan includes investments around the world, centered on boosting the VW brand's presence in three parts of the market: low-cost vehicles, SUVs, and battery-electric vehicles.

It's the latter two that are relevant to the U.S., where VW has big goals. According to VW brand chief Herbert Diess:

We will be significantly stepping up our activities in the USA. The main focus will be on the key segments in the country, large SUVs and [sedans]. In those segments, we will be strongly expanding our range. In a second stage, we will then take our new electric cars to North America. Over the next few years, we will be making considerable investments in electric infrastructure.

VW's plan to expand in the U.S. will begin next year with the all-new made-in-Tennessee Atlas SUV. Image source: Volkswagen AG.

While VW is a dominant force in Europe and China, the brand's U.S. market share is currently around 2%. It's just a niche player here. The goal is to turn it into a "relevant and profitable volume producer" in the U.S. market.

As Diess said, that plan has two parts: first, a wave of new and improved SUVs designed with the U.S. market in mind, starting with the recently announced VW Atlas, and second, a new line of electric vehicles along with a build-out of recharging infrastructure to support them.

VW said that it will begin producing electric vehicles in North America in 2021. By 2025, the company said that it wants to be selling a million VW-brand electric cars per year around the world and to be the global leader in "e-mobility."

Moving past the scandal and becoming a major player in the U.S.

Simply put, this plan is about giving the Volkswagen brand a way to turn the page from its diesel-emissions cheating scandal. It's also about boosting the VW brand's profit margins, which have been poor in recent years, and about reversing the brand's long slide to niche status here in the United States.

The profit-margin boost is significant and long overdue. Setting aside the costs of the diesel scandal over the last year, Volkswagen, as a company, has been among the most profitable automakers in the world for several years now. But much of that profit came from VW's Audi and Porsche brands -- the Volkswagen brand itself had an operating profit margin of only about 2% in 2015. VW hopes to double that to 4% by 2020, and to boost it to 6% by 2025.

SUVs will help boost profits, but only if they're competitive. The brand's current SUV models, the Touareg and Tiguan, haven't made much of a dent in the market here. Part of the problem is price: At $49,495 to start, the midsize Touareg isn't much cheaper than the $54,800 Audi Q7, its close mechanical sibling. The smaller Tiguan does somewhat better at $24,995, but it's still expensive for what it is -- and it's not competitive on other fronts with big-selling rivals like Ford's Escape or Honda's CR-V.

VW hopes that its all-new Atlas will start to change that. The Atlas, a three-row SUV that's about the same size as a Ford Explorer, was designed with the U.S. market in mind, and will be built at VW's factory in Chattanooga, Tennessee. But a lot will depend on the Atlas's pricing, how it compares in reviews to rivals like the Explorer and Toyota's Highlander -- and on the new, smaller VW SUVs that will follow the Atlas. 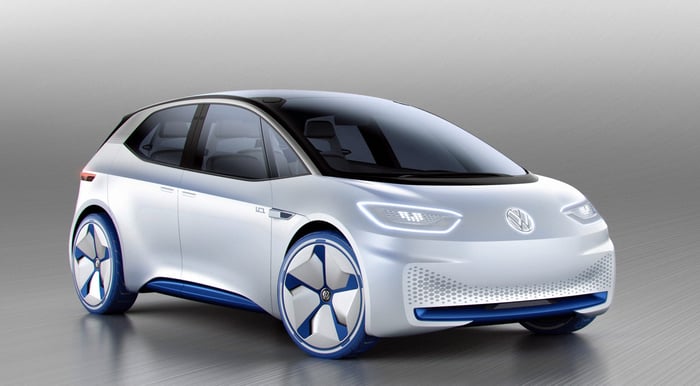 VW's ID Concept is a preview of a new long-range battery-electric VW that is expected to arrive in 2020. Image source: Volkswagen AG.

As for VW's aggressive push into electric vehicles, it's hard to say how that will play out. VW's first mass-market electric car is said to have specs that compare well to GM's Chevrolet Bolt EV -- but the electric VW won't go into production until 2020. Meanwhile, the Bolt is shipping right now. How far will GM (and others) advance between now and the VW's launch?

The upshot: Investors need to see more than a big plan from VW

There's no obvious flaw with VW's ambitious plan -- except that it's very late to the global SUV boom, and it looks like it might be late to the battery-electric party, as well. I don't doubt that VW can be competitive: The company has massive global scale, capable engineers, and -- the diesel scandal notwithstanding -- plenty of money to spend.

But competitors aren't standing still, and VW's plan depends on its making inroads into market segments where its biggest rivals have sizable leads. I think investors need to see more concrete results from VW before buying into this vision.