Crude oil roared higher this week, ending up double digits after OPEC officially agreed to cut its production by more than 1 million barrels per day. That agreement also sparked a huge rally across the oil patch. But while the entire sector moved higher, the biggest beneficiaries of OPEC's announcement are companies that had struggled with low oil prices. That's why some of this week's biggest movers, according to data from S&P Global Market Intelligence, were Atwood Oceanics (NYSE:ATW), Hornbeck Offshore Services (NYSE:HOS), Denbury Resources (NYSE:DNR), Whiting Petroleum (NYSE:WLL), and Oasis Petroleum (NYSE:OAS): 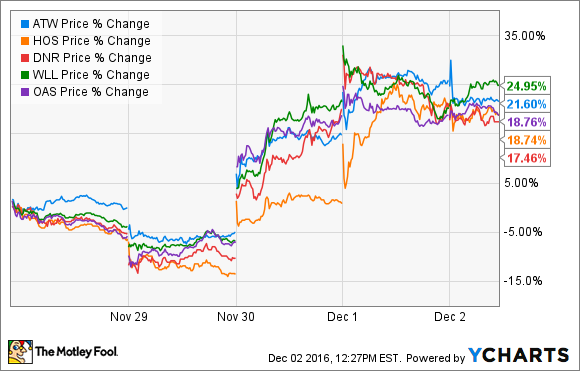 The offshore drilling market was in trouble well before OPEC started its market share war. That is because the sector was battling an oversupply of rigs and high costs, which only grew worse once prices started crashing. However, with OPEC changing course and supporting prices, it should remove a huge weight that had been holding back offshore drilling activities. A return of stable pricing should give offshore producers the confidence to increase their capex budgets, which could lead to more work for contract driller Atwood Oceanics and service company Hornbeck Offshore Services. That said, oil needs to move much higher, and the industry needs to continue to right-size its equipment inventory and cost structure before it is smooth sailing for Atwood Oceanics and Hornbeck Offshore.

Denbury Resources is another company that needs outside help to get back on track. One of the enhanced oil recovery specialist's biggest challenges is that its most profitable oil hedges expired at the end of the second quarter, leaving the company even more exposed to lower oil prices, evidenced by a $10-per-barrel decline in its average realized oil price last quarter. On top of that, Denbury Resources has a rather bloated balance sheet, which forced it to take several actions to cut debt including selling non-core assets and buying back notes on the open market at a discount. That said, what the company needs are steadily rising oil prices, which would provide it with the cash flow to pay down debt and reinvest in its asset base. Those higher prices are now much more likely thanks to OPEC.

Finally, Bakken-focused drillers Oasis Petroleum and Whiting Petroleum will also benefit from the additional support OPEC will provide to the oil market. In Oasis Petroleum's case, it has only been able to keep its production roughly flat during the downturn while it worked on getting its costs down. However, it has made substantial progress in that area and was poised to deliver mid-teen production growth through 2018 at $50 oil. Unfortunately, Whiting Petroleum is not quite to that level, as it needs roughly $50 oil to keep production flat. With a new Bakken oil pipeline nearly complete, which should push its transportation costs down by $3 per barrel, the company was getting to that point where it could start growing again. But with OPEC stepping in, it should drive prices higher and enable Whiting and Oasis to accelerate drilling in the future.

The entire oil market breathed a sigh of relief this week now that OPEC has decided to end its market share war and instead will go back to bringing stabilization to the market. This agreement should cause prices to rise steadily, which would incentivize producers to invest more money into offshore development. Furthermore, the deal should also provide a much-needed boost to companies that have higher breakeven levels because it should supply them with more cash flow to pay down debt and invest in their production base.