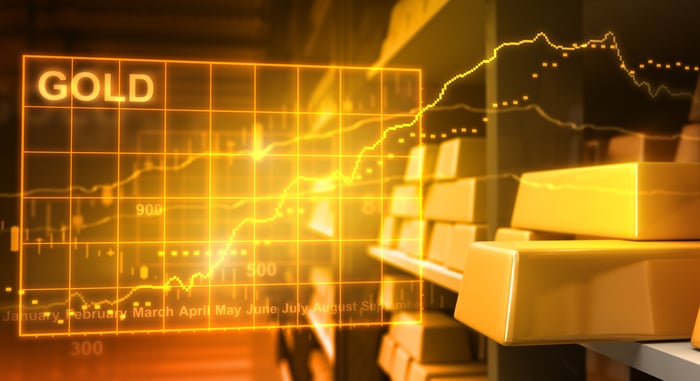 In what the market has interpreted as a boon for business, the election of Donald Trump drove the S&P 500 up more than 3% through November. At the same time -- much to gold investors' chagrin -- the price of gold fell about 9%. It comes as no surprise, then, that many of the market's largest gold stocks suffered double-digit declines, including Franco-Nevada (TSX:FNV), Newmont Mining (NYSE:NEM), Barrick Gold (NYSE:GOLD), Goldcorp (NYSE:GG), and Kinross Gold (NYSE:KGC).

Going with the stream

As a royalty and stream company, Franco-Nevada is unlike the other businesses mentioned below: It neither operates mines nor develops projects. Instead, the company provides financing to the mine operators and developers. In exchange, it receives a royalty on the miner's future sales, or it retains the right to buy a stream of precious metals at a reduced price. Because of this business model, the company is not as exposed to risk as the mine operators.

Falling nearly 14% through November, Franco-Nevada's slide was not as bad as other companies dealing in gold. For one, the company's revenue sources are diversified, extending beyond the yellow metal. In fiscal 2015, gold accounted for 76% of revenue, silver and platinum group metals each accounted for 8%, other minerals accounted for 2%, and oil and gas accounted for 6%. Another distinguishing factor is Franco-Nevada's attractive balance sheet. Unlike mine operators, which rely heavily on debt, Franco-Nevada ended the third quarter of fiscal 2016 with approximately $278 million in cash and no debt. 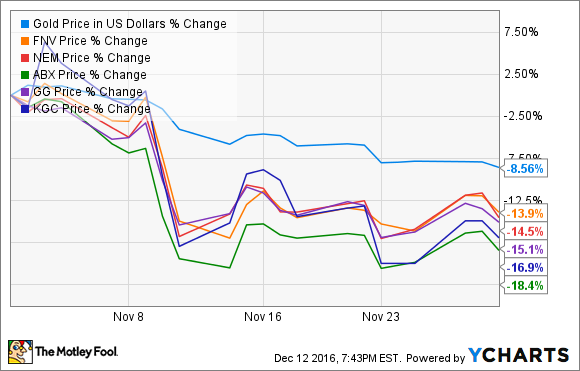 Turning to the leaders among gold miners, we find that shares of both Newmont Mining and Barrick Gold sold off heavily after the election, ending November more than 14% and 18% lower, respectively. Evidently, the successes which both companies had enjoyed throughout the year -- Newmont Mining and Barrick Gold began November up 111% and 150% since the start of the year -- could not shield them from the market's fears over the falling price of gold.

Ironically, both companies had released solid Q3 earnings reports prior to the election, further suggesting that the sell-offs were overreactions. Newmont Mining, for example, reported $622 million in EBITDA for Q3 -- a 3% year-over-year improvement -- while free cash flow grew 51% compared to the same period last year. Meanwhile, Barrick Gold reported $674 million in free cash flow for Q3 -- more than the first two quarters of fiscal 2016 combined. And speaking to the company's continued improvements in controlling costs, management provided improved guidance for the third consecutive quarter, targeting all-in sustained costs (AISC) to fall between $740 and $775 per gold ounce for fiscal 2016. 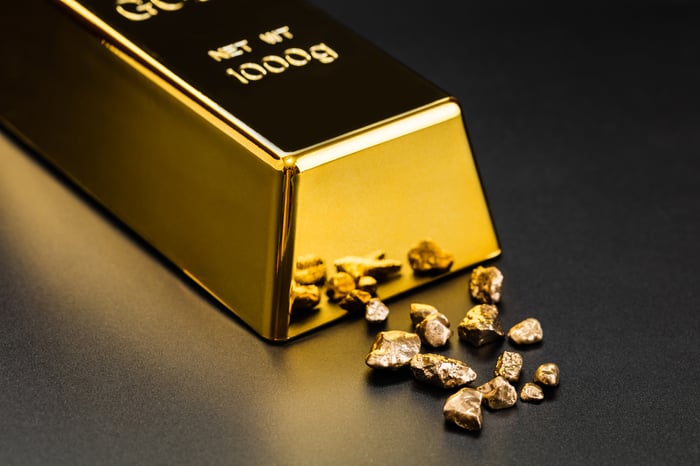 Similarly, investors taking a hasty glance at Barrick Gold's Q3 earnings could find fault with the company's year-over-year decline in free cash flow and find reason -- albeit unmerited -- to sell off shares. Whereas the company reported free cash flow of $866 million in Q3 2015, it only reported $674 million in Q3 2016. A less shortsighted look at the earnings would provide a much different perspective. Through the first three quarters of fiscal 2016, Barrick Gold reported $1.13 billion in free cash flow -- a 63% gain over the $694 million it reported during the same period last year.

Eyes on the Americas

Unlike Newmont Mining and Barrick Gold -- each of which operates mines on numerous continents -- Goldcorp maintains mining operations on only two: North America and South America. Unfortunately for Goldcorp, though, it did share something in common with Newmont Mining and Barrick Gold: a steep sell-off in November despite a decent Q3 earnings report.

During the quarter, Goldcorp resumed normal operations at its Penasquito mine in Mexico, following a 10-day maintenance shutdown in the second quarter. The largest gold-producing mine in Mexico and, arguably, Goldcorp's most valuable mine, Penasquito contributed $289 million in revenue for the quarter. Cerro Negro, second to Penasquito in terms of revenue, accounted for only $147 million in the quarter. Also noteworthy from the quarter was the company's success in lowering its AISC, improving it to $812 per gold ounce in Q3 from $1,067 per gold ounce in Q2. Consequently, management affirmed its AISC guidance for 2016: a range between $850 and $925 per gold ounce.

Like with Newmont Mining and Barrick Gold, a brief glance at its Q3 financials could have driven reckless investors to abandon ship, scared off by the near-17% fall in revenue year over year.

Rounding out the roundup

Kinross Gold, like the peers mentioned above, suffered a similar fate in November as shares fell nearly 17%, giving back some of the gains it had made during the year. Through the first 10 months of 2016, shares of Kinross Gold -- like Newmont Mining -- had been up nearly 110%.

Demonstrating another similarity to Newmont Mining, Kinross Gold had a lot to celebrate in its third quarter. In addition to increasing revenue 12.5% year over year, the company grew its free cash flow by a whopping 83.6% year over year, according to Morningstar. Although the company managed to churn out significantly more cash this quarter, bears, spooked by the dip in the price of gold, surely focused on more dour figures like the 24.2% year-over-year drop in EBITDA.

Leading up to the election, many people had speculated that a Donald Trump victory would translate to a spike in the price of gold. Much to their surprise, Trump's victory caused the opposite. As to be expected, this translated to a sell-off in gold stocks, but smart investors know that this short-term volatility doesn't shed much insight into how the companies are actually performing.