Ford Motor Company (NYSE:F) said this past week that it earned $284 million before taxes in its Asia-Pacific region in the fourth quarter.

That's not a bad result, but it was down 36% from the $444 million pre-tax profit it earned in the region a year ago.

Should shareholders be concerned? Let's take a closer look at what Ford said about its result.

As you can see from the slide below, Ford's wholesale shipments in the region were up 9% in the fourth quarter. Revenue was flat year over year, but CFO Bob Shanks noted that the revenue total doesn't include revenue from the joint ventures (JVs) with domestic Chinese automakers that account for most of Ford's sales in the huge Chinese market. 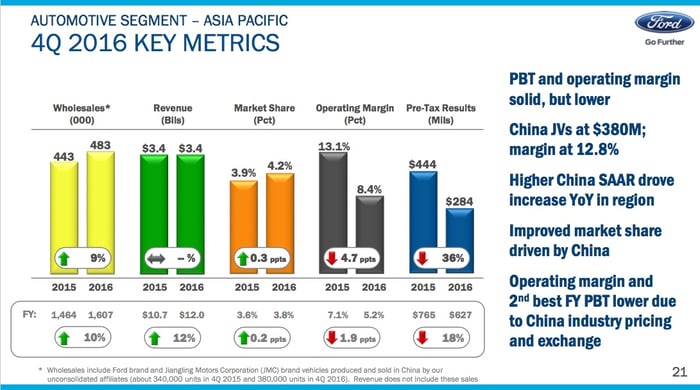 Shanks said Ford's results in China were responsible for its gain in market share in the region. "That's very strong sales at Escort and then the Taurus, the Edge and the Lincoln all contributing" to a year-over-year improvement in product mix, Shanks said.

Shanks noted that China was also responsible for the year-over-year drop in profit. While 2016 was Ford's second-best year ever in the region, it was down from the prior year.

Shanks said there were two key factors in the drop, an unfavorable exchange-rate swing between the renminbi and the U.S. dollar and pricing pressures. Early in 2016, Ford lost ground in China to aggressively priced new products (particularly small SUVs) from domestic Chinese automakers. That put pressure on Ford's sales at the lower end of the market, hurting sales of the Kuga (the Chinese version of the Escape SUV) in particular.

Ford responded with some changes to its operation that allowed it to cut prices while still maintaining good profitability. That allowed it to recover much of the market-share ground it had lost earlier in the year by the end of 2016. (In fact, Ford's sales in China rose almost 18% in the fourth quarter year over year.) 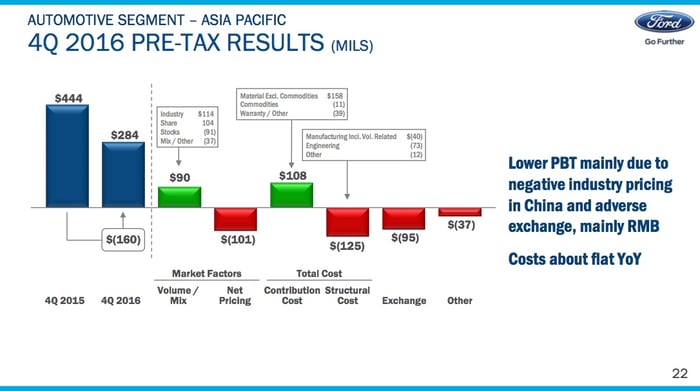 "You can see the impact on net pricing and the impact on exchange" on Ford's fourth-quarter result versus its profit a year ago, Shanks said. He noted that costs were about flat year over year, and while Ford's "mix" of products in China was more profitable over the full year, the fourth-quarter comparison includes two of its profitable new products, the Edge SUV and big Taurus sedan, both of which had been launched by the fourth quarter of 2015.

Looking ahead: Why Ford expects a better result in 2017

Shanks said that Ford expects its profit in the Asia Pacific region to improve in 2017 versus its full-year 2016 result. But it doesn't expect that improvement to come from China.

"We think the China JV profits will be relatively flat. Margin will still be double digit but probably down a bit, again, because of continued negative pricing, although moderating from what we saw this year and unfavorable exchange. What we're going to see is improved results across the rest of Asia Pacific, which we also saw in 2016 but at a pace that's even greater," Shanks said.

For investors, here's the takeaway: Ford's operation in China is successful and profitable, but as the overall pace of growth in China has slowed, Ford has come under some competitive pressure. That's not surprising, and it's not a reason to worry (much). The good news is that Ford is now putting some effort into improving its results in the rest of the Asia-Pacific region, and that should yield additional profit gains in 2017.