Microsoft (NASDAQ:MSFT) is putting some pep back in its step these days. On Friday, Reuters pointed out that the software giant's market cap has risen above $500 billion for the first time since March 2000.

I'm all for celebrating neat milestones, including this 17-year benchmark. And it's no secret that Microsoft really is doing a lot of things right these days. Large-cap stocks don't post market-crushing 55% returns in two years for no reason.

That being said, I would like to argue that the Microsoft you see today is miles removed from the $500 billion beast you knew 17 years ago.

First, let me point out that $500 billion ain't what it used to be. The inexorable march of inflation hollows out the value of your dollar over time, and 17 years of that action can do a lot of damage. To wit:

Okay, nobody sets up milestones and goalposts at $697 billion. We want nice, round numbers. But if you don't consider inflation-based erosion over the long run, you're doing a disservice to your investments. It's real.

Market cap is the easy way out. You simply multiply current share prices by the number of shares outstanding. Handy for discussion and popular at every cocktail party, market cap is one of those metrics you can lean on for quick comparisons.

But it's also an overly simplistic measurement in many ways. Let's say you actually wanted to buy all of Microsoft. You (or the cabal of multi-billionaires and cash-rich companies you're working with) would then have to take over all of Microsoft's debts, because lenders and bondholders won't just drop their claims when the takeover happens. On the upside, you also get to keep all of Microsoft's cash equivalents, which is kind of like buying a nice wallet and finding a hundred-dollar bill inside.

Now we're looking at the enterprise value instead. The market cap is just a starting point, followed by adding the company's debt balances and subtracting its cash reserves. This (plus an appropriate buyout premium) would be the true price tag in a takeover.

As it turns out, Microsoft comes with more cash equivalents than debt. Today, this metric stops at $459 billion -- a few bucks short of the magic $500 billion waterline. Here's how Redmond's enterprise value has developed over the last 17 years compared to the simpler market cap: 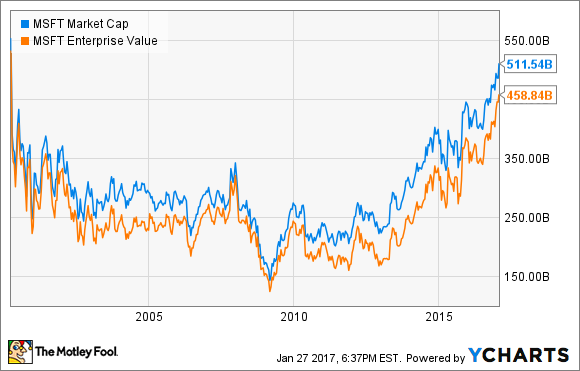 Honestly, there's always more to say about a business as complex as Microsoft. I'm not here to write a book today, so let's keep this short and sweet.

Before I go, let me just point out that Microsoft has done a lot of growing up since the dot-com boom and bust. Trailing sales have nearly quadrupled, while free cash flows doubled: 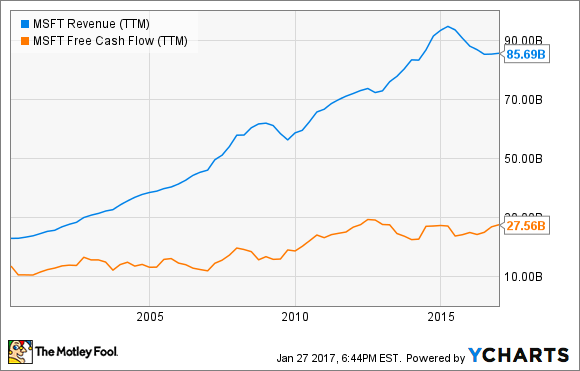 The company's dividend policy is just 13 years old, but now provides a decent 2.4% yield. And Microsoft's balance sheet was free of long-term debt 17 years ago, but that changed in 2009. The current statement of financial accounts has very little in common with the lean, low-capital version it wielded in 2000. Cash and debt balances have skyrocketed in recent years, and Microsoft has started amassing a generous chunk of plant, property, and equipment assets (PP&E in the chart below).

If I didn't know better, this almost looks like the balance-sheet antics of an industrial manufacturing conglomerate: 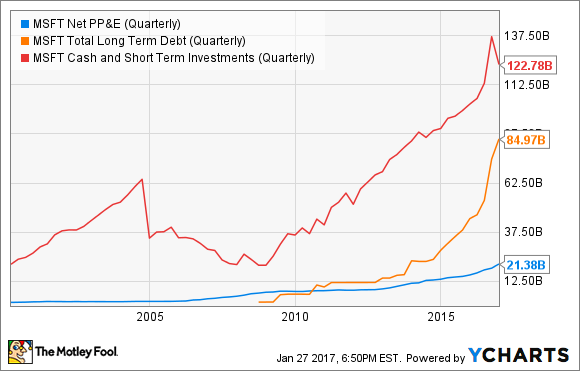 Meet the new boss, not the same as the old boss

Any way you slice it, the rejuvenated version of Microsoft shares few characteristics with the older owner of a $500 billion market cap. The world has changed, the software industry never stops changing, and Microsoft is forever busy adjusting to new realities.

So if your opinions and investment thesis regarding Microsoft haven't changed in 17 years, I'm sorry to say that the company did not just hop in a time machine to skip the last 17 years. You'll have some reading to do if you want to keep up.