There's little doubt that Wells Fargo's (NYSE:WFC) stock is a promising long-term investment. Warren Buffett himself said that if he could only invest in one stock, the California-based bank would be the one.

But this doesn't mean that Wells Fargo is bound to outperform its peers every single year. Just check out its 2016 performance. While the KBW Bank Index, which tracks two dozen large-cap bank stocks, returned 29% last year, Wells Fargo's stock was up a mere 4%. 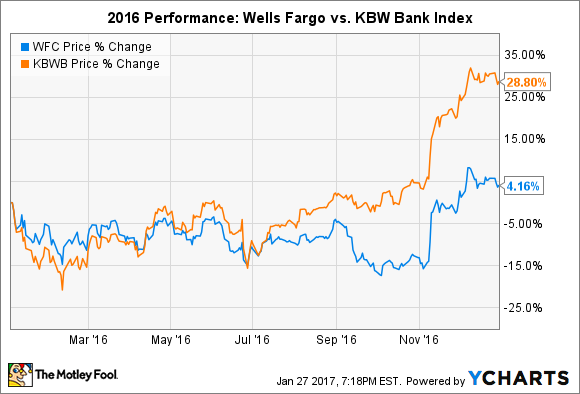 Wells Fargo struggled last year because it ran afoul of regulators after they discovered that the bank's employees had for years been opening fake credit card and checking accounts for customers in order to meet unrealistic sales quotas. This will weigh on its returns in 2017, too, as Wells Fargo's decision to eliminate product sales goals in its branches has caused new account openings to drop by more than 40% on a year-over-year basis.

But it's something else that's likely to have an even bigger impact on Wells Fargo for the foreseeable future. And it isn't what you might expect. Namely, unlike many of its peers which have positioned their balance sheets to earn a lot more money as interest rates rise, Wells Fargo began preparing last year for the opposite outcome.

On the second-quarter earnings call last July, then-CEO John Stumpf, who has since resigned, started talking about interest rates staying "lower for longer."

Analysts and commentators had been optimistic in the first half of the year that the Federal Reserve would continue boosting the fed funds rate, the primary short-term interest rate benchmark in the United States, after it did so for the first time in eight years in December 2015. But then Brexit struck in June, igniting uncertainty in the markets and convincing executives at Wells Fargo that rates might not be on the verge of rising after all.

"Brexit has added to global economic uncertainty and could result in rates remaining lower for even longer than expected putting pressure on reinvestment opportunities," noted Stumpf at the time.

Wells Fargo responded by positioning its balance sheet to be less asset sensitive -- that is, to benefit less from a rate rise than other banks. Bank of America (NYSE:BAC) and JPMorgan Chase (NYSE:JPM), meanwhile, went in the opposite direction.

The impact from these different strategies will play itself out this year, as rates did in fact proceed to rise in the final months of 2016. Long-term rates shot up in the immediate wake of the presidential election in November, reflecting investors' wager that Trump's vow on the campaign trail to accelerate economic growth would translate into higher inflation. And short-term rates increased in December following the Federal Reserve's final monetary policy committee meeting of the year.

On top of this, policymakers at the Fed believe that the upward trend in rates will continue throughout 2017.

The impact for Bank of America will be considerable. It's set to earn $600 million in additional net interest income each quarter this year, most of which should fall to the bottom line. JPMorgan Chase should see about half that increase, which is still a meaningful amount. Wells Fargo, which isn't as forthcoming with its interest rate sensitivity, will almost certainly lag behind in this regard.

To make matters worse, Wells Fargo is the biggest mortgage originator in the country. And because mortgage demand tends to be inversely correlated with interest rates, this business line could serve as a further anchor on Wells Fargo's performance as rates rise.

None of this is to say that the nation's third biggest bank by assets won't have a good year. If regulations in the financial services industry are eased as promised and economic activity picks up, Wells Fargo stands to benefit tremendously. But because other banks will, too, it's less likely to result in a relative advantage for any of them.

In short, while Wells Fargo continues to be a great stock for long-term investors, it may be prudent for them to temper their expectations with respect to its performance compared to other banks over the next 12 or so months.