Shares of Match Group (NASDAQ:MTCH) are down this year after delivering impressive gains in 2016, as analysts fear the company's high-growth days might be coming to an end. The Tinder parent's top-line guidance of $1.26 billion to $1.31 billion for the year has raised a red flag, as Wall Street was looking for $1.41 billion in revenue.

The midpoint of the outlook pins 2017 revenue growth at just 5%, well below the 20% growth seen in 2016. The anticipated sale of Match's test-preparation service, The Princeton Review, will negatively impact revenue, but this cannot be an excuse for the weak guidance as 92% of Match's revenue comes from its online dating businesses.

The Princeton Review contributed the other 8% (under $100 million) of Match's revenue last year. An identical performance in 2017 would have kept its revenue growth at only 13%.

Match Group's paid member count increased by 1.1 million, or 23%, last year thanks to the popularity of Tinder. As it turns out, Tinder accounted for 956,000 paid members in 2016, almost 87% of total additions. The company's massive reliance on its flagship dating app, however, is hurting its business. 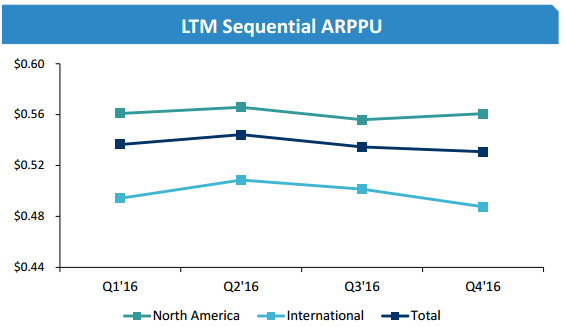 Match's average revenue per paying user (ARPPU) stagnated last year as it has kept Tinder's pricing lower than its other properties. A Match.com subscription, for instance, costs $41.99 a month at most, and only $20.99 a month for the annual package. A Tinder subscription, meanwhile, goes for as low as $9.99 a month if you're under the age of 30.

The service gets cheaper in emerging markets, where a user needs to shell out just $2.99 a month. This is why Match's ARPPU is significantly higher in North America, which brings us to the next problem that the company is facing.

International growth can help Match get back on track

Match needs to drive its paid-member count higher to offset the declining ARPPU. Therefore, the company is making a smart move by keeping prices low internationally to attract more users. In India, for instance, the Tinder Plus service can cost as little as $4.50 a month for the annual package.

Match will ramp up its marketing spend in India, Brazil, and Turkey by 16 times in the first quarter from the prior-year period, a welcome change as compared to a virtually nonexistent campaign last year. The company has found some success with an initial investment of $100,000 in Brazil during the fourth quarter that led to user growth, though it did not get into specifics.

In India, Match is partnering with well-known young celebrities and film houses to grab the attention of the millions of singles present in the country. Additionally, it has been designing its ad campaigns in line with Indian sensibilities. The good news is that Match did well in this market even when it had no major branding, racking up 14 million Tinder swipes daily in April 2016 as compared to 7.5 million in September 2015.

Match will get a shot in the arm in these emerging markets thanks to increased marketing. Revenue gains, however, can only be expected in the longer term, as the company has ruled out any meaningful impact of its efforts this year.

Analysts expect Match to report stronger revenue growth of over 12% in 2018, up impressively from 2017 projections. Therefore, its growth could get into a higher gear once the emerging-market investments start bearing fruit.