The fast-casual chain spiked on takeover rumors. Here's who could be interested.

Shares of Panera Bread Co. (PNRA) were rising today on some surprising news as rumors were swirling about a potential buyout of the fast-casual bakery chain. The stock closed up 7.9% on the chatter.

Around noon today, Bloomberg reported that the company was considering strategic options after being approached by a potential buyer. Bloomberg said that JAB Holdings, Starbucks, and Domino's were among the interested parties. 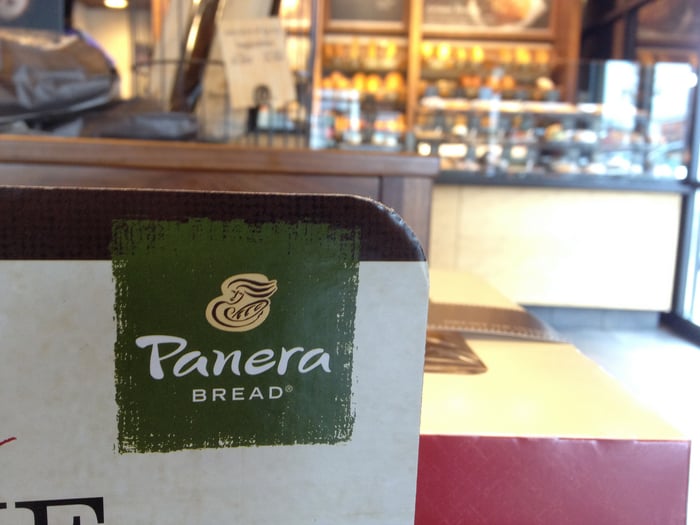 A spokesman for Domino's slapped down rumors about the pizza chain acquiring it, saying the company had no interest, but Starbucks and JAB both declined to comment.

Panera, one of the largest fast-casual brands in the country, would be a big prize for any buyer out there.

Acquisitions of a company the size of Panera Bread, which is worth more than $6 billion after today's jump, are rare in the restaurant industry, though consolidation may be picking up as the market seems to be saturated with new locations and many chains have seen sliding comparable sales recently.

Of the three companies named by Panera, JAB would be the most likely suitor, especially as Domino's rejected the rumors and Starbucks has a new CEO on the job who has enough on his plate without integrating a massive acquisition.

JAB, on the other hand, is a holding company that has targeted coffee businesses before, having acquired Keurig Green Mountain and Krispy Kreme. It also owns a number of smaller roasters. The company has deep pockets as it previously spent $14 billion on Keurig, and is experienced with the cafe business through its ownership of Krispy Kreme, Einstein Bros. Bagels, and Caribou Coffee. Panera would fit well with that brand family.

It's still early as the news broke today, and Bloomberg's source stressed that any deal could easily fall apart. However, Panera sotck is likely to remain elevated as anticipation for a deal builds.

Why Investors Should Be Cheering This Record-Setting Restaurant Buyout
405%