Please ensure Javascript is enabled for purposes of website accessibility
Log In Help Join The Motley Fool
Free Article Join Over 1 Million Premium Members And Get More In-Depth Stock Guidance and Research
By Chris Neiger - Apr 6, 2017 at 10:11AM

These two companies aren't the same on paper, but both have a way of chasing new opportunities that could continue to pay off for their investors.

Let's get this out of the way first: CalAmp (CAMP 1.92%) and NVIDIA (NVDA -4.20%) are two very different companies. CalAmp makes devices for connecting industrial equipment to the internet so that its customers can track, manage, and analyze their vehicles and other equipment. The company has a market cap of just $587 million and is making a big bet on the massive Internet of Things market.

NVIDIA, on the other hand, is a $64 billion chipmaker that makes the vast majority of its top-line revenue from selling GPUs in the gaming segment. But the company is taking its dominance in the GPU space and parlaying that into strong positions in the artificial intelligence (AI) and driverless car markets.

Now that we've gotten the difference between these two companies out of the way, let's take a closer look at what each has to offer: 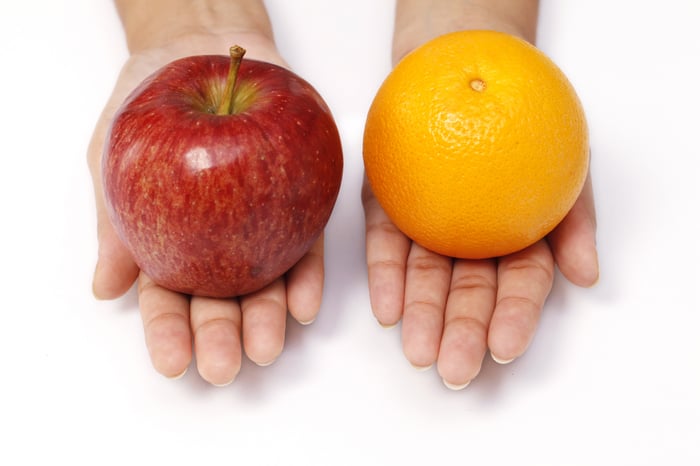 NVIDIA currently holds more than 70% of the discrete desktop GPU market, while its main rival, Advanced Micro Devices, takes the rest. That dominance has helped the company consistently bring most of its revenue from the gaming segment -- about 62% in the most recent quarter -- but NVIDIA isn't satisfied staying there.

The chipmaker is using GPUs to power its own driverless car technologies and build sophisticated AI systems. NVIDIA's Drive PX 2 supercomputer uses the company's GPUs to process vast amounts of image data collecting by semi-autonomous cars and help the car understand what it's looking at. NVIDIA has partnered with many carmakers looking to advance their own driverless car pursuits, including a recent partnership with Tesla.

But the company isn't stopping there. NVIDIA is also chasing a $5 billion-plus opportunity in AI as well. Last year, it began selling its $129,000 DGX-1 supercomputer that uses deep learning to help scientists carry out their research. DGX-1 has 170 teraflops of processing power and NVIDIA says it's 12 times faster than former GPU-based deep learning hardware and software. Additionally, it sells GPUs for advanced AI systems for Facebook, Microsoft, IBM, and others.

NVIDIA trades at about 32 times its forward earnings right now, compared to the tech industry average of 26.

CalAmp makes most of its revenue selling connectivity hardware to companies, and  selling software and services that allow its customers to analyze the data that's being collected. Caterpillar is one of CalAmp's largest customers and brought in $6 million in revenue in the most recent quarter. The company said it expects business with Caterpillar to increase to $7 million to $8 million per quarter starting next fiscal year, which would be about 9% of its total quarterly revenue.

In addition to CalAmp's ability to bolster device sales to its key customer is the fact that it is also doing a stellar job of growing its software sales. CalAmp said that in the fiscal third quarter 2017 its software-as-a-service revenue spiked 51% year over year and that it now has 621,000 software and services customers. That growth can't be overstated, because software and services is going to be a key growth area in the IoT. An IDC press release recently said that, "while hardware spending will nearly double over the five-year time frame, it represents the slowest growing IoT technology group. Software and services spending will both grow faster than hardware and connectivity."

CalAmp's focus on Industrial Internet of Things (IIOT) connections is a bet that the company's hardware, software, and services will dominate connections in the coming $195 billion IIOT market (by 2022).

Both NVIDIA and CalAmp are carving out their own spaces in their respective markets. But if I had to choose one company over the other right now, it would have to be NVIDIA. I think CalAmp might actually have more room to grow its share price, but it also has more uncertainties than NVIDIA.

NVIDIA's opportunities in AI and driverless cars mean that this company has plenty of room to grow outside of its core gaming business -- and it's already proving to be a leader in these spaces. But investors should know that the GPU maker has already seen monstrous returns over the past year and it's unlikely to be able to maintain the same pace for too much longer.