Please ensure Javascript is enabled for purposes of website accessibility
Log In Help Join The Motley Fool
Free Article Join Over 1 Million Premium Members And Get More In-Depth Stock Guidance and Research
By Rich Smith - Apr 6, 2017 at 11:13AM

And what about Boeing?

It almost seems like every time the U.S. Congress authorizes an aid package for Israel, Boeing (BA 2.28%) and Raytheon (RTN) cash a check.

Last year, we told you about the big new defense aid package that the Obama administration proposed to benefit Israel -- a deal initially valued at as much as $40 billion over 10 years. The deal was subsequently scaled back to $38 billion, but even so, then-National Security Advisor Susan Rice called the deal "the single largest pledge of military assistance to any country in U.S. history."

Recent developments suggest it could also be a very big deal for Boeing and Raytheon. 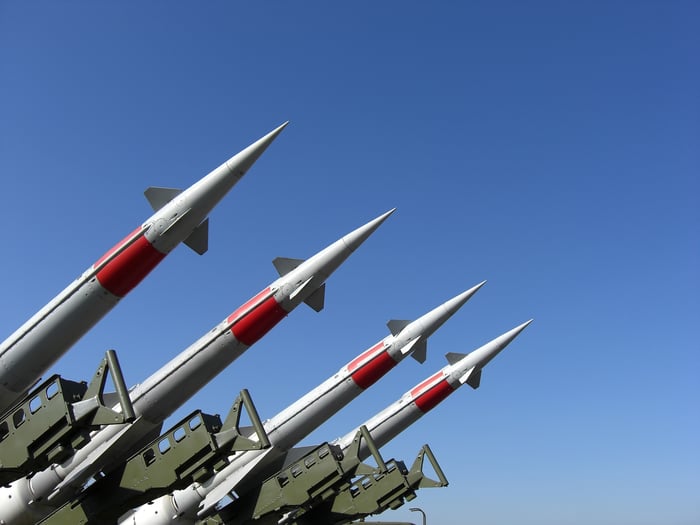 What's in the box?

Not all details of what's covered by the arms package have been made public. One thing we do know, though, is that the Israeli military aid deal includes $5 billion worth of funding for Israel's new three-layered missile defense system, comprising:

As investments go, these appear to be well thought out -- and well timed. Israel's Iron Dome anti-missile defense system was extensively and successfully battle-tested during Hamas' missile barrages against Israel in both 2012 and 2014. According to reports, Iron Dome successfully shot down 85% of targets it engaged during the 2012 conflict -- and approached 90% accuracy in 2014.

Arrow, too, is beginning to prove its worth, having shot down a Syrian surface-to-air missile, which was targeting Israeli warplanes, just last month. And as for David's Sling, that system is scheduled to go live later this month.

Good news for Boeing and Raytheon

Boeing helped Israel Aerospace Industries to develop the Arrow. Raytheon collaborates with Israel's Rafael on both Iron Dome and David's Sling. As such, more money for Israel's missile defense programs is almost certain to mean more money for Boeing and Raytheon -- and that's more true now than ever before. Here's why.

Israel negotiated hard for the Obama administration both to increase the amount of military aid it offers Israel and to attach fewer strings to that aid. In particular, Israel wanted to preserve and expand its right to spend U.S. military aid on contracts awarded to Israeli companies. For its part, the Obama administration sought to tie increased aid to a phasing-out of Israel's right to spend aid funds on domestic contracts -- and to require Israel to use its aid monies to purchase weapons from U.S. defense companies instead. Ultimately, the U.S. won this argument. As a result, more and more often now, Israel will be required to spend its aid money on purchases from Raytheon and Boeing -- maybe not all $5 billion of the missile defense portion of the foreign aid, but a good chunk of it.

And if Raytheon and Boeing should be able to use technologies funded by U.S. aid monies and developed in cooperation with the Israelis to produce more advanced missile defense systems for sale to the U.S. military, and to other U.S. allies?

That would be icing on the cake.