Each of these semiconductor companies is betting on emerging technologies -- but one chipmaker has a better strategy for growth.

The semiconductor sector can be a volatile space: Companies are constantly shifting their products, managing fast-paced product cycles, and offering race-to-the-bottom prices in order to win spots for their chips in the world's top devices.

Those uncertainties can make the industry highly cyclical, and they make predicting which companies will perform well over the long term even more difficult. Investors seeking the best players have likely come across Himax Technologies (HIMX 4.29%) and NVIDIA (NVDA 4.28%). Let's take a closer look at each, and attempt to figure out which one has the better long-term prospects. 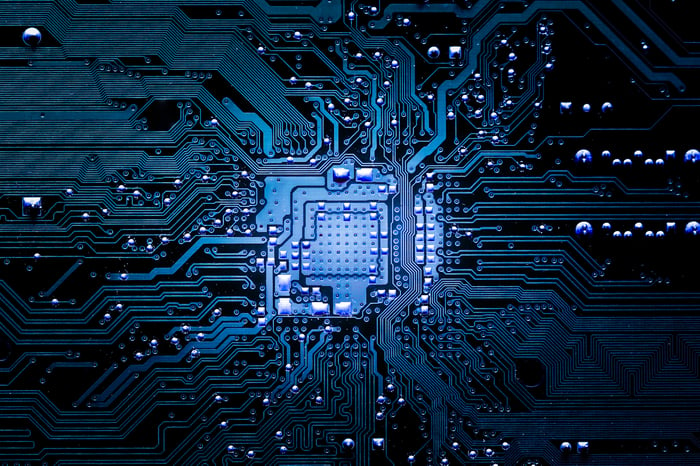 Himax is a fabless chip designer of semiconductors for TVs, laptops, smartphones and tablets, and makes controllers for things like touch-sensor displays. It breaks its revenue down into three main segments: large-sized panel drivers, small and medium-sized panel drivers, and non-driver sales.

The company made some gains in the fourth quarter of 2016, with large panel driver revenue grew growing 21.8%, small and medium-sized panel drivers ticking up 9%, and non-driver sales increasing 6%, year over year.

Many investors see two key sources of potentially significant growth for the company -- namely, augmented reality (AR) devices, and the possibility of earning a spot for its products in Apple's next iPhone. The AR opportunity is predicated on rising demand from Himax's customers for liquid crystal on silicon (LCOS) and wafer-level optics (WLO) designs. Himax believes that growing demand in these two product areas could help the company in the long term, though those big gains probably aren't imminent.

"It is worth noting that despite the near-term headwinds, we remain positive on the long-term prospect of our WLO and LCOS product lines, judging by the expanding customer list that covers some of the world's biggest tech names," CEO Jordan Wu said on the Q4 earnings call.

Additionally, there's the chance that the company's 3D sensing technologies may be chosen for the next iPhone iteration. Morgan Stanley's Charlie Chan believes that not only will the iPhone incorporate Himax's 3D sensor tech, but that its adoption in that device will spur other smartphone makers to follow suit. Chan believes this could end up contributing 20% of Himax's 2018 revenue.

NVIDIA is by far the leader in the graphics processing unit market, with more than 70% of the discrete desktop GPU market share right now. That's great news for the company, as 62% of its revenue in the fourth quarter of its fiscal 2017 came from sales to GPUs for the gaming market.

The company had a tremendous Q4 (which ended in Jan. 29): Its gaming revenue increased by 66% year over year, data center revenue spiked 205%, automotive revenues jumped 37%, and professional visualization revenue ticked up 10%.

That growth is flowing from NVIDIA's accurate belief that it can take its class-leading GPUs and apply their power to other uses, and new markets. That mentality has, for example, allowed the company to expand into the driverless car segment with its Drive PX 2 supercomputer, and into artificial intelligence with its DGX-1 server.

Toshiya Hari of Goldman Sachs believes that NVIDIA could take $5 billion to $10 billion in the AI space with its GPUs, and the company has already proved it can hold its own in the semi-autonomous car market -- 80 automakers and suppliers are already using the company's Drive PX computer.

If you step back and a take a high-level view of these companies, there's not much of a comparison. Sure, Himax has some prospects within AR, and winning a spot in the next iPhone could certainly help the company. But Himax seems to playing the same tune that it always has -- trying to win a place in the next great device -- and that strategy has left investors disappointed in the past.

The first bet was on Google Glass, which caused Himax's stock to pop -- and later, to crash. Then it was the prospect of making huge gains because of Microsoft's Hololens, which has since fizzled (at least, for now). Now, according to Morgan Stanley, it's the iPhone. The potential of gains from a victory with that already hugely popular device may seem less speculative than betting on the success of an AR device, but the story of small companies flying too close to Apple and then getting burned is all too familiar.

Meanwhile, NVIDIA is consistently growing its core GPU gaming business, while successfully expanding its footprints in new markets. Sure, the company's 181% share price jump over the past 12 months might scare off some investors who think that the stock has little room left to rise. But adriverless cars and AI systems are only beginning to take off, and I think NVIDIA's solid prospects in those markets easily make it a better long-term play than Himax.