Ford Motor Company (NYSE:F) is showing off its latest "electrified" product in New York this week: A hybrid police car.

What it is: A true "pursuit-rated" hybrid police car

At first glance, the Ford Police Responder Hybrid Sedan (yes, that's the name) looks like a Fusion Hybrid sedan that has been given the cop-car treatment. That's what it is, but Ford officials emphasize that the "cop-car treatment" is much more than black and white paint. 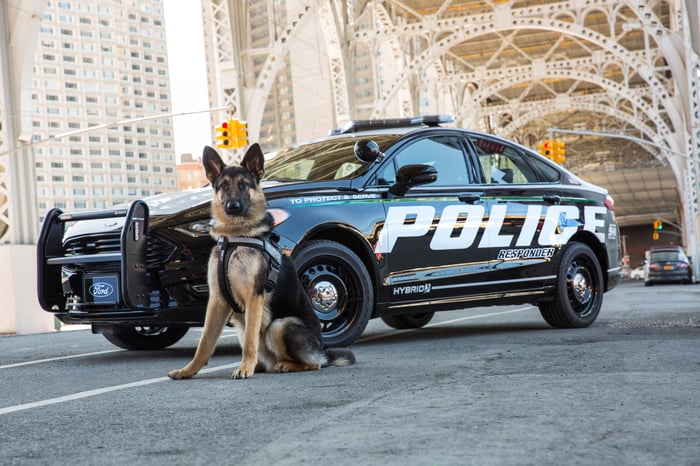 Ford's new Police Responder Hybrid Sedan is based on the Fusion Hybrid, with extensive modifications for police duty. The K9 officer is not included. Image source: Ford Motor Company.

Ford's new police car has heavy-duty brakes and suspension pieces designed to hold up to sustained duty service, a revamped interior that includes seats designed to be comfortable for officers wearing gun belts, and a revamped gasoline-electric hybrid system optimized for police use.

Ford said that the Police Responder Hybrid was tested by the Los Angeles Police Department, which does an annual test of new police vehicles, and passed with flying colors.

But to be clear, the new Ford is "pursuit-rated" -- a term that means it'll hold up to sustained use in urban patrol-type service. It's not rated for full-blown highway-patrol use, which requires heavier-duty vehicles that are reinforced to withstand high-speed collisions.

Ford expects it to be popular with urban police departments -- and not just for environmental reasons.

Ford said that its all-new Police Responder Hybrid Sedan is part of its plan to encourage the adoption of hybrids and electric vehicles by showing that adding electric drivetrains to vehicles can do more than boost fuel economy.

The new hybrid police car is certainly efficient, with an EPA-estimated combined fuel-economy rating of 38 miles per gallon -- much more efficient than most police vehicles in service in the U.S. today. 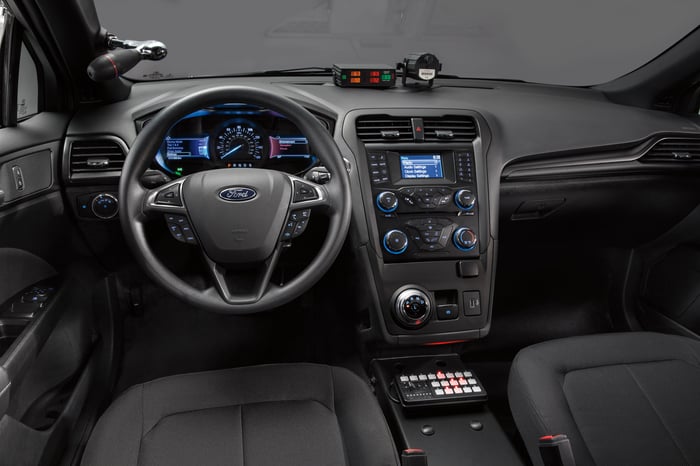 But Ford says there's more to it than that: The hybrid drivetrain can boost the car's acceleration when needed -- and when it's sitting, as police cars often are, the car's battery system can help supply the heavy electrical needs of police radios and other equipment, reducing the need to keep the gasoline engine running.

Add it all up, and the message to city governments and cash-strapped police departments is that big cost savings are possible over time:

While idling, the Police Responder Hybrid Sedan's lithium-ion battery helps power the high electrical loads of a police vehicle, reducing engine run time and saving an estimated 0.27 gallons of fuel per hour. Police Responder Hybrid Sedan customers could see nearly $3,900 a year in potential fuel savings per vehicle relative to the Police Interceptor, if a police vehicle is driven 20,000 miles per year, runs two shifts per day, 365 days per year, idles 4.9 hours per 8-hour shift, and is fueled at an average gas price of $2.50/gallon.

Not a big market, but an important one for Ford

That's not a lot of vehicles in the grand scheme of things. But police cars are important to Ford for reasons that go beyond sales totals. They're highly visible ambassadors for the Ford brand, and an important part of the Blue Oval's government-fleet offerings, which together account for around 5% of Ford's U.S. sales every year. (Rivals General Motors and Fiat Chrysler Automobiles would love to win more of that business.)

Will police departments go for Ford's new hybrid cruiser? Ford thinks it's well-suited to win sales from urban departments concerned about costs and fuel economy, and I'm inclined to agree. Police-department vehicle buyers tend to be fairly conservative in their choices (for obvious reasons -- lives ride on those choices). If Ford says it's good, and the LAPD says it's good, then that's probably good enough for most departments -- particularly if the costs work out favorably over time.