It's a great time to pick up shares of AT&T, T. Rowe Price, and Procter & Gamble.

The evidence is overwhelming: Dividend Aristocrats -- companies that have increased their annual dividends for 25 or more consecutive years -- consistently outperform the major market indices, like the S&P 500.

Sure, those investments are far from flashy, but as a Fool, I care about helping you, my readers, reach your savings goals without taking foolish -- with a lowercase "f" -- risks with your hard-earned nest egg. With this in mind, let me quickly review why shares of Dividend Aristocrats AT&T (T 0.10%), T. Rowe Price (TROW 0.05%), and Procter & Gamble (PG -0.41%) seem like smart buys today.

It's no grand insight to note that AT&T is a winning dividend stock. The company has raised its payouts for an impressive 32 years running, and its current 4.8% yield sits well above double that of the S&P at the moment. However, AT&T's leadership position in ushering in some important changes to the global telecom and media industries makes it an even more interesting potential investment today.

As I have repeatedly noted, AT&T's coming acquisition of Time Warner (TWX) will make AT&T one of the two companies best positioned to bring cable-TV programming onto mobile devices; its other well-positioned peer is Comcast. To most efficiently bring about this change, mobile operators will want to own content assets, which can serve as leverage to help secure new mobile-distribution rights from other media networks, which can be notoriously difficult negotiators (just ask Apple ). If this thesis plays out, AT&T will be able to bundle mobile content with cellular service and a host of other potential services, which could help the telecom operator's subscriber growth accelerate in the years to come.

Though T. Rowe Price clocks in as one of the younger Dividend Aristocrats -- it has only raised its dividend annually for three straight decades -- the Baltimore-based asset manager offers a compelling mix of yield and value at its current price. The company trades at a P/E ratio of just 14 times 2016 earnings, and yields 3.2% -- on both counts doing far better than the market today. However, as I've learned more about the company, I've come to believe T. Rowe Price's qualitative aspects play just as big a role, if not bigger, to the investment thesis for this company as its financial performance.

A staple of corporate stewardship lists, T. Rowe Price operates with a strong corporate culture of service to its clients, while its conservative approach to its business makes it truly special today. The company is guided by the same six principles its founder, Thomas Rowe Price Jr., built his company around in 1937, which include maxims such as "Put clients first" and "Act with integrity and accountability." A culture of steadfastness shines through in the company's management team, which has worked an average of 16 years at the firm. The company's commitment to its founding principles manifests itself in its financial structure as well. As a stark exception in the era of leveraged finance, T. Rowe Price carries no debt on its balance sheet, giving it the stability to endure virtually any negative economic event. As evidenced by its meaningful discount to the market, the company tends to get overlooked by investors, which has created a compelling opportunity to snap up shares of this Dividend Aristocrat on the cheap. 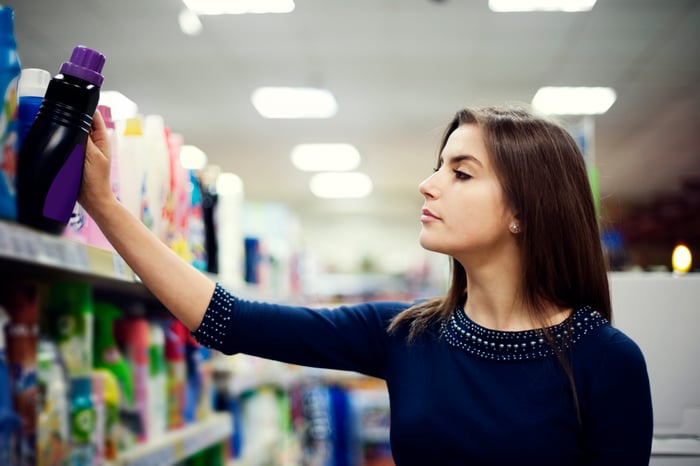 Last but certainly not least, consumer goods giant Procter & Gamble -- the bluest of the blue chip stocks -- is an interesting potential buy right now as it continues to execute its strategic overhaul. The company has markedly underperformed the market indices over the past one and five years, and deservedly so. The company has lost market share across its five main reporting segments in each of the past two years.

To remedy this, P&G management has sold over 100 brands to shore up additional capital to reinvest in its most profitable brands. Its efforts may be beginning to bear some green shoots, as the company is expected to return to sales growth this year, albeit just at an anemic 2% year-over-year clip.

However, this near-term bearishness obscures an opportunity to purchase one of the most legendary dividend growth stocks in the investing world. The company has raised its dividends annually for 61 consecutive years, most recently announcing a 3% increase last week. P&G currently yields 3%, and it is exactly the kind of "set and forget" stock for income investors. As one of the largest consumer goods companies in the world, P&G will never rack up consistent double-digit growth. However, its proven business model, powerful brands, and pricing power will allow it to continue to deal out lavish cash payments to its investors for years to come.