Growing sales in Europe should set up a profitable first-quarter result for Ford.

Ford Motor Company (F 2.71%) said that its sales in Europe rose 14% in March, as the global SUV boom continued to drive growth for the Blue Oval in the Old World.

The raw numbers: Ford gained share in the heart of Europe 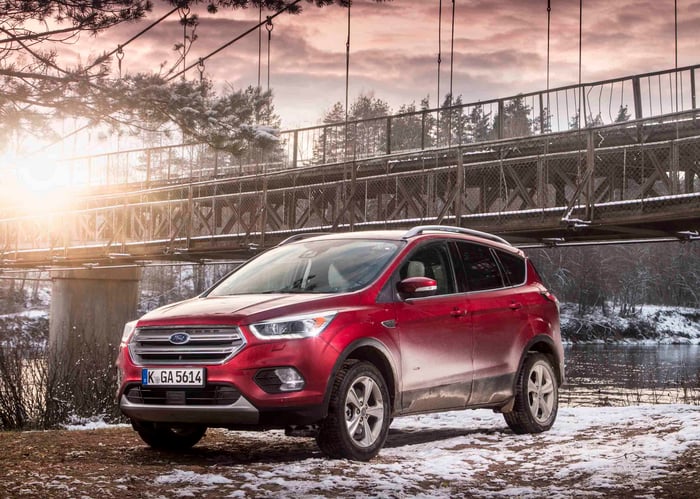 European sales of the Ford Kuga, a sibling of the Escape, rose 45% in March. Image source: Ford Motor Company.

What worked and what didn't for Ford in Europe in March

The big story is a theme that's been playing out for a few quarters now. Historically, Ford offered a small portfolio of models in Europe, mostly sedans. It has recently expanded its European model range to include several of its well-regarded SUV models -- and European buyers like what they've seen.

Sales of the small Ecosport crossover SUV rose 46% from a year ago, the one-size-up Kuga (twin to the U.S.-market Escape) jumped 45% with just over 21,000 sold, and the bigger Edge added another 2,300 to the total.

These are profitable sales, too. Ford noted that its 'high-series vehicles," meaning those with upper-level luxury or performance trims, represented 68% of its passenger sales in Europe in March. That's up 4 percentage points from a year ago.

Ford's commercial vehicles, the Transit line of vans and the Ranger pickup, also did well: Sales rose 9% to about 43,700 in March, good for 15% market share in the Euro 20.

What didn't work? It's a very short list: Sales of the midsize Mondeo sedan, the European-market twin of the Fusion, fell about 18% from a year ago. As with its U.S. sibling, the Mondeo is the principal victim of that shift in buyer preferences toward SUVs.

Analysis: A good first quarter for Ford in Europe

The analysis here is short and sweet: Ford's sales gains in Europe outpaced the overall market's increase in the first quarter, and the gains came primarily from Ford's more profitable product lines. That suggests that we'll see a solidly profitable result when Ford reports its first-quarter earnings later this month. Ford earned a solid $1.2 billion before taxes in Europe in 2016.

Keep in mind, the first quarter of 2016 was a terrific quarter for Ford in Europe. Ford appears to have built on that success in 2017.

What's next for Ford: Earnings

The Blue Oval will report its first-quarter 2017 results before the bell on Thursday, April 27.