Please ensure Javascript is enabled for purposes of website accessibility
Log In Help Join The Motley Fool
Free Article Join Over 1 Million Premium Members And Get More In-Depth Stock Guidance and Research
By Tyler Crowe - Apr 29, 2017 at 11:49AM

After all of Weatherford International's cost-cutting over the past few years, the company still can't translate that into profits.

Investing in Weatherford International (NYSE: WFT) has been an exercise in patience for quite some time. Management has been promising that it will return to profitability, become free cash flow positive, and chip away at its onerous debt load. Yet this past quarter went by without much progress on any of these fronts.

One thing that has changed, though, is that the company has elected a new CEO with years of experience at one of Weatherford's largest competitors. There's hope therefore that his time there will work to Weatherford's advantage. Here's a look at what happened this past quarter as well as some of management's plans to get back in investors' good graces. 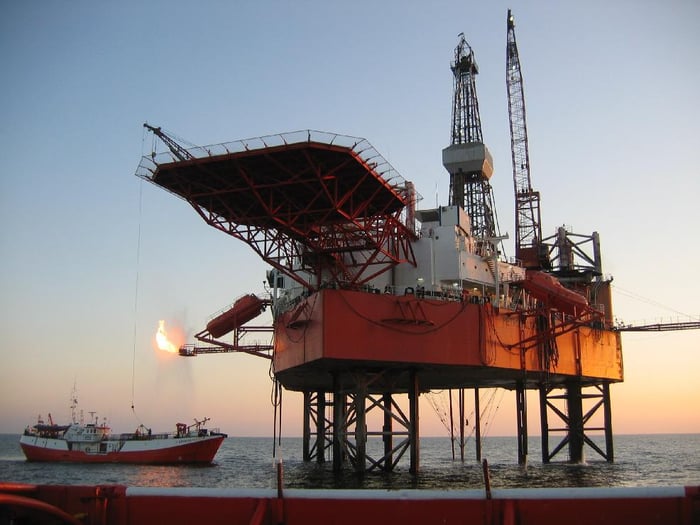 With oil and gas activity picking back up in North America, this past quarter has been a testing ground for how much exposure the respective oil services companies have to that particular market. Looking at Weatherford's business lines, it's clear that the company does have a decent exposure to this red-hot market, but certainly not enough to make it profitable.

There is a caveat to its North American results, though. The company previously announced it would shut down its pressure pumping operations because of low profitability and that it would contribute those assets to the OneStim joint venture with Schlumberger (SLB -0.31%). Had that equipment been in use, then chances were good that Weatherford's North American business segment would have posted an operational profit.

As for the rest of the world, lower oil prices continue to delay any significant investments. This isn't something unique to Weatherford. Just about every other oil services company has reported a decline in revenue and earnings outside North America. 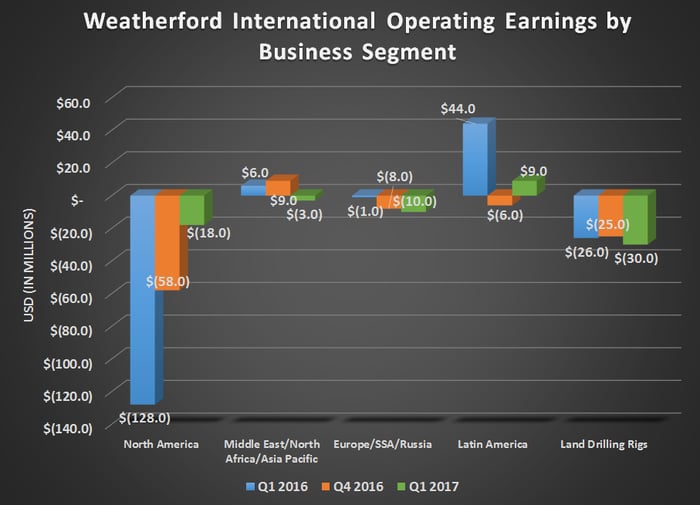 Weatherford's management broke out what it considered one-time items, which totaled $130 million for the quarter. It would be great if we could just shrug those off, but the company has taken these "one-time" charges in one form or another for 12 straight quarters. You can only call a charge a one-time event so many times before investors are simply going to consider them part of doing business. Until Weatherford can actually prove that it doesn't need to spend money on restructuring or impairments in a quarter, investors are better off including these charges into an investment thesis and ignoring any reporting that adjusts for these one-time charges.

Another thing that has caused problems for Weatherford in the past has been a lack of free cash flow. This quarter was no different. The company's operations burned through $179 million in cash, a large portion of which is related to servicing its debts. Despite needing to source outside cash to meet its spending needs for the quarter, it remains in compliance with all debt covenants.

Mark McCollum made his inaugural statement as the CEO of Weatherford. His press release sounded very much like those of his former employer, Halliburton, where he talked a lot about execution and efficiency. McCollum did note that investor patience has been running thin as of late and that he wants to restore trust in the company.

In our next chapter, we intend to intensely focus on execution and process discipline, which will serve as our cornerstones for improved profitability and returns. As we emerge from the worst downturn in oilfield history, there has never been a more important time for collaboration across our organization as well as with our clients, reinforcing our commitment to being a trusted business partner to those we serve.

Our highest priority will be to improve and strengthen our balance sheet. Through more disciplined cost management, we will continue to streamline our operations, becoming a more efficient and leaner organization. This includes the completion of the OneStim joint venture and the divestiture of our Land Drilling Rigs business. Delivering heightened service quality and reliability will position our Company on a solid path toward long-term profitability. Improved profitability will in turn drive cash flow, and stronger cash flow will improve our balance sheet. We realize the responsibility of being good stewards and recognize that there is work to be done to earn your trust and confidence. We are committed to meaningfully improving our returns and increasing shareholder value.

McCollum has a big job ahead of him to improve and strengthen the balance sheet. As he mentioned, doing so will involve making operations free cash flow positive, which means making its existing operations more cost-effective. Basically, it will involve even deeper cost-cutting than has already taken place at the beleaguered oil services company.

So far, though, it does look like Weatherford is making the right moves. The OneStim joint venture with Schlumberger should help make what is typically a low-margin business -- pressure pumping -- into a more comprehensive, higher-margin service that better utilizes the assets of both companies. Moves like this and a return to higher levels of oil and gas activity outside of North America will likely need to happen before Weatherford can deliver on its promises. So until we see these happen in earnest, it's probably best to wait and see if Weatherford can pull it off.