Please ensure Javascript is enabled for purposes of website accessibility
Log In Help Join The Motley Fool
Free Article
Join Nearly 1 Million Premium Members And Get More In-Depth Stock Guidance and Research
By Frank DiPietro – May 10, 2017 at 11:11AM

Corning looks like it may be able to catch a wave of growth. At the same time it has an impressive plan to return capital to shareholders.

Corning Inc.'s (GLW 0.48%) Q1 earning's announcement showed strong results that very well may be the start of a strong year for the company.

As the chart below shows, strong sales growth across its core businesses yielded 14% top line growth on a non-GAAP constant currency basis. Non-GAAP core earning's growth of 20% was outstanding, and coupled with management's buyback program which yields a lower share count, non-GAAP core EPS was up a hefty 39% year over year.

Core performance metrics (non-GAAP) are adjusted to exclude the impact of changes in Japanese yen and Korean won foreign exchange rates, as well as other items that do not reflect ongoing operations of the company. Data source: Corning. Chart by author.

But even after Corning's banner quarter, there's still plenty for investors to like looking forward for the company. 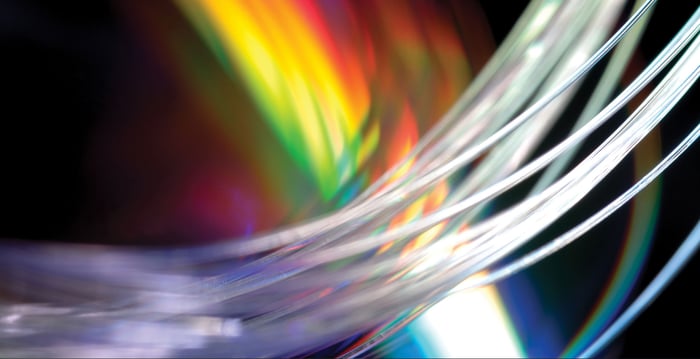 Corning is giving money back to shareholders

A key item for investors to watch is management's plan to return $12.5 billion to shareholders through dividends and share buybacks by the end of 2019.

During Q1 Corning paid shareholders a cumulative $168 million in dividends and bought back 15.3 million shares of stock for an additional $408.3 million in capital returns.

Chairman and CEO Wendell Weeks summed up the progress made to date on the capital return program.

Since October 2015, we have returned more than $6.5 billion. Repurchases have reduced outstanding shares by approximately 24%. We increased the dividend 14.8% in February, and 12.5% last year. Additionally, the framework calls for increasing the dividend by at least 10% in 2018 and 2019.

Below is a chart showing Corning's Q1 results for its five core businesses.

Core performance metrics (non-GAAP) are adjusted to exclude the impact of changes in Japanese yen and Korean won foreign exchange rates, as well as other items that do not reflect ongoing operations of the company. Data source: Corning. Chart by author.

A week prior to the earning's release Corning made a joint announcement with Verizon Communications Inc. (VZ -1.77%) that Verizon would be purchasing up to 12.4 million miles of fiber optic cable from Corning each year from 2018 through 2020. The deal is valued at a $1.05 billion minimum purchase commitment. Verizon, like other carriers is working on building out its network and preparing for the rollout of 5G. Although this should not effect this year's revenue, it is excellent news for the future of Corning's Optical Communications business going forward.

The other piece of good news for the company is reflected in the strong growth of Gorilla Glass sales. Gorilla Glass is accounted for in the company's Specialty Materials business which had 32% YOY sales growth and 50% YOY non-GAAP core earning's growth in the first quarter.

In early April DisplayMate gave the Samsung Galaxy 8 an A+ rating for its OLED display. Corning's Gorilla glass protects the display and has a curved design for this smartphone.

New wireless charging smartphone designs are expected to have glass backs to accommodate the new technology. This innovation could in effect double the industry's requirement for Gorilla Glass for phones that have the wireless charging feature.

Corning looks like a company with a lot going for it

Corning's results for the quarter are impressive. The company's obsession with returning capital to shareholders is steadfast. At the same time, the infrastructure requirements from the likes of Verizon and other carriers focused on rolling out 5G networks puts Corning's fiber business in the spotlight for more growth. Couple that with the growth in Gorilla Glass and investors are doubly rewarded -- a growing technology company with an excellent capital return program. It looks like that profile won't be changing any time soon.