Investors love dividends for many reasons, including the guaranteed income and the simple fact that many of these companies have proven business models and are more stable. But every once in a while, for various reasons, investors can find phenomenal stocks that have a lot of upside potential and pay a dividend -- these are the stocks that can be huge winners over the long term. Ritchie Bros. Auctioneers (NYSE:RBA) and PetMed Express, Inc. (NASDAQ:PETS) fit this description for the following reasons.

At first glance, Ritchie Bros. Auctioneers might not look like a stock poised to double in the years ahead, but it holds some serious competitive advantages that should enable it to do just that. You likely haven't heard of the company, but it's the world's largest seller/auctioneer of used heavy equipment. The company connects the dots between consignors looking to sell equipment for the highest possible return and hundreds of thousands of customers from roughly 190 countries looking to buy used heavy equipment. 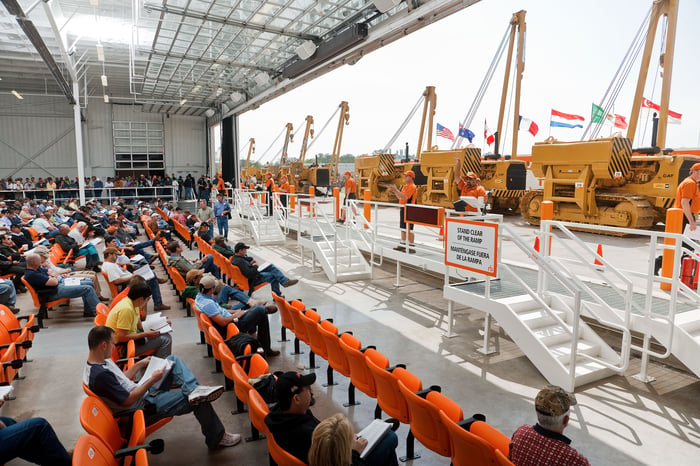 RBA has had a great run over the past couple of years, but it's coming off a bumpy first quarter thanks to a strong prior-year comparison as well as weakness in its Western Canada markets, which had slightly weaker demand for heavy equipment. That's just part of business in this industry, though, and over the long term, RBA's network effect and unrivaled scale set the stage for massive upside.

Try this tidbit for a competitive advantage: RBA competes in a highly fragmented industry and is roughly four times the size of its next closest competitor. Not only does its reach extend across the globe, but its recent acquisition of IronPlanet is a game-changer for its online presence, which now generates almost half of its auction bids.

RBA uses its massive scale and online reach to draw in more sellers. Because its audience dwarfs that of any competitor, sellers understand that their best opportunity to maximize their selling price is through RBA. It's a virtuous cycle, because as more sellers choose RBA, more customers flock to the auction site looking for a wider range of products -- it doesn't get any better than that in the auction industry. 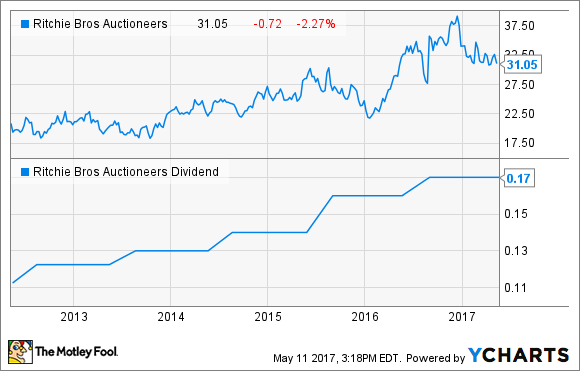 RBA also rewards its investors with a steadily increasing dividend. Currently, it's dishing out $0.17 per share quarterly, which equates to a yield of 2.17%. That's not a yield to sneeze at for a company owning such advantages in a fractured industry that it could dominate in the decades ahead.

Early innings of a long game

It's no secret that Americans are paying more attention to their furry friends than ever before. Whether it's pet-friendly birthday cakes, toys, or important medication, people are willing to pay money to improve their pets' quality of life. In fact, Americans spent more than $66 billion on their pets in 2016, a record high and a trend that appears ready to continue moving higher. It's estimated that spending could increase to $96 billion by 2020, according to Packaged Facts, a leading market research firm.

That's good news for PetMed Express, a nationwide pet pharmacy that markets prescription and nonprescription pet medications and other health products for dogs, cats, and horses direct to the consumer. Veterinary care and medications continue to rank as two of the top three highest spending categories in the pet industry, as millennials have officially taken over as the primary demographic and have further developed their relationships with pets. 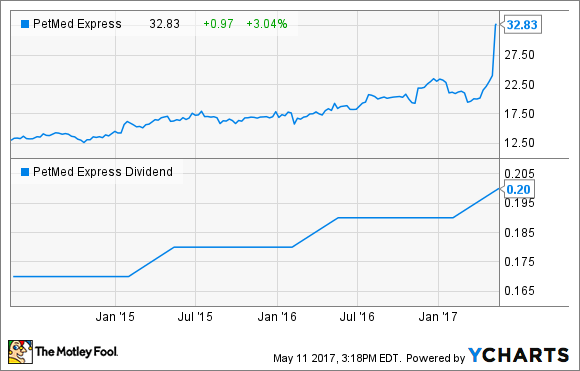 That chart might look scary, as the market has sent the company's stock soaring after its blowout quarter. And sure, patient investors might be able to get a better price, but the company's market cap is a modest $670 million, which means it has plenty of room to run, especially as a small-cap stock in a growing industry. Currently, the company pays out a $0.20 per-share quarterly dividend for a yield of 2.45%. That pays out roughly 80% of its earnings per share, but that speaks to management's bullishness about the company's ability to grow its earnings quickly.