Shares of JPMorgan Chase (NYSE:JPM) are up 26% since the presidential election in November, but for long-term investors, there are three reasons to believe that its stock is still a buy right now.

First and foremost, JPMorgan Chase is an incredibly well-managed bank, as its performance before, during, and after the financial crisis proves. Unlike most of its peers, who went to the government for help to survive the crisis, the government was the one that reached out to JPMorgan Chase, asking it to save a pair of major banks that had run into trouble: Bear Stearns and Washington Mutual.

These deals, done for large discounts to the acquired banks' book values, enabled JPMorgan Chase to emerge from the crisis as the nation's biggest bank by assets, passing both Citigroup and Bank of America. The deals also helped JPMorgan Chase become the most well-rounded universal bank in the United States, roughly equally balanced between investment and commercial banking.

The net result is that JPMorgan Chase's stock has turned in the best performance among big bank stocks over the past decade: 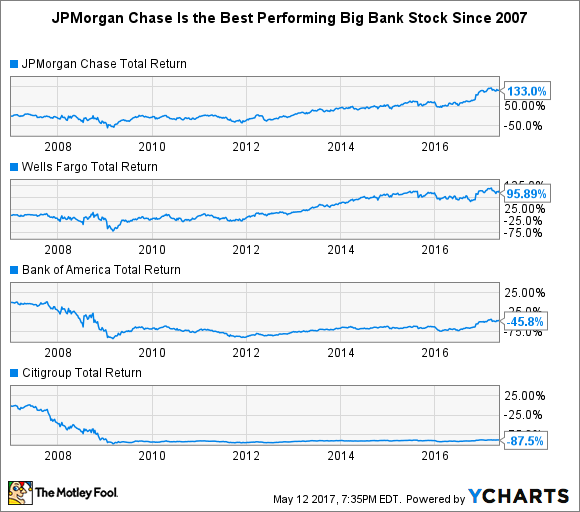 In addition, at least the way things are playing out right now, there's every reason to believe that the operating environment for banks will only improve in the quarters and years ahead. Interest rates should continue to climb, and the new presidential administration has promised to slash many of the regulations that were enacted pursuant to the Dodd-Frank Act of 2010.

These two trends will help JPMorgan Chase on both the top and bottom lines. According to the bank's latest interest rate sensitivity analysis, which you can find on page 65 of its first-quarter 10-Q, a 100-basis-point increase in short- and long-term rates will translate into $2.3 billion worth of added net interest income each year. And while it's hard to get a read on the pecuniary relief banks will realize if regulations are eased, it's fair to say that doing so could meaningfully cut compliance costs at big banks in particular.

And it's not as if JPMorgan Chase's stock is overvalued. Its shares currently trades for 1.35 times book value, according to YCharts.com. That's less than the 1.42 average on the KBW Bank Index, which tracks two dozen blue-chip bank stocks. 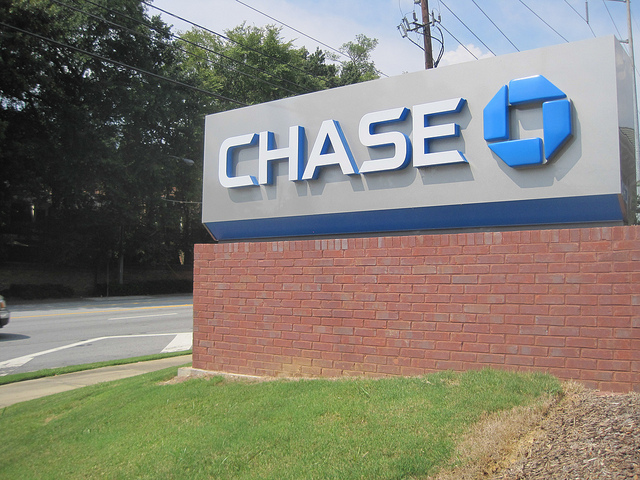 To be clear, there are downsides to buying JPMorgan Chase stock as opposed to investing in another bank. In the first case, as a global systemically important bank, it can't use as much leverage as its smaller and simpler peers in the regional banking space. And because banks make money by leveraging capital, this will weigh on JPMorgan Chase's profitability.

Furthermore, because JPMorgan Chase is already so big, there's a limit to how quickly it can grow. And the limit isn't just arithmetic, as banks holding more than 10% of domestic deposits, as JPMorgan Chase does, are legally prohibited from acquiring other depository institutions.

But for investors who are less concerned with growth and more interested in stability (and dividends, as JPMorgan Chase's stock yields a respectable 2.3%), shares of the nation's most storied big bank make for a compelling long-term investment.