Looking for cheap stocks in a high-flying market? Check out Ford, Boardwalk Pipeline Partners, and Verizon.

The basic thesis and methods of value investing were pioneered by Columbia University professors Benjamin Graham and David Dodd in the 1920s and involved analyzing metrics including the price-to-earnings ratio, book value, and dividend yield as a way to identify securities that traded below their real value.

This approach has produced some of the most successful investors in history, and with stocks trading near record highs, taking a value-based approach stands out as a prudent way to select stocks today. Read on to learn why three top Motley Fool contributors think Ford Motor Company (F -0.22%), Boardwalk Pipeline Partners (BWP), and Verizon Communications (VZ -0.07%) are value stocks that deserve the attention of astute investors. 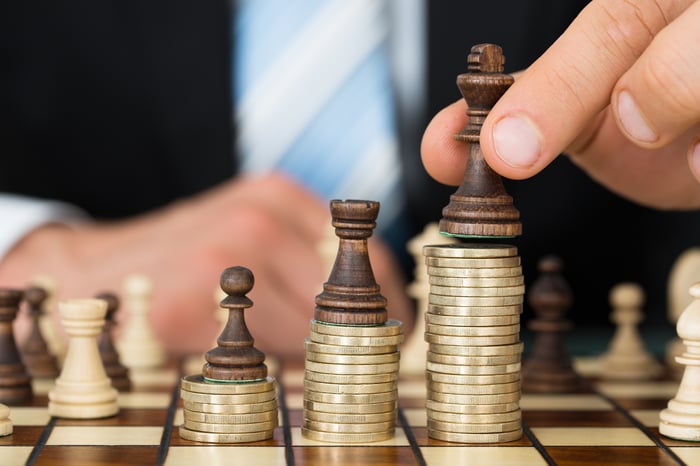 Racing down the open road

Dan Caplinger (Ford Motor): Value stocks can be tough to evaluate when they're in industries that see dramatic rises and falls in earnings over the course of a business cycle. Nowhere is that clearer than in the automotive industry, where peak earnings can lull investors into a false sense of security. That's the situation that Ford Motor finds itself in right now, sporting a trailing earnings multiple of 12 and a forward multiple of less than seven. Yet some investors think that the record sales that the industry produced in 2015 and 2016 are a thing of the past, and a future drop will crush the bottom line at Ford much more sharply.

But Ford isn't going down without a fight. Instead, it's looking at ways to secure its profits, even if it comes at the cost of revenue declines. In its most recent quarter, for instance, Ford saw 4% sales growth, but net income was down by more than a third. Going forward, though, Ford expects to invest heavily in technological advancement and updated product offerings, seeking to stay ahead of its competition and make investments that will pay off through long-term growth.

The replacement of Mark Fields with new CEO Jim Hackett should help accelerate the pace of change and improve the level of communication between the company and key stakeholders, and that will hopefully show up in the performance of the shares going forward. Even if profit levels fall somewhat, the margin of safety in Ford's stock price gives investors enough breathing room to endure short-term setbacks and remain focused on the long run.

Matt DiLallo (Boardwalk Pipeline Partners): Natural gas pipeline master limited partnership Boardwalk Pipeline Partners doesn't get enough credit from investors. The company generates very stable cash flow since 90% of its revenue comes from fee-based assets. It has an investment-grade credit rating, backed by an improving net debt-to-EBITDA ratio that ended last year at a solid 4.5. Furthermore, it has one of the best distribution coverage ratios in the sector at 5.0 because the company retains the bulk of its cash flow to help finance growth projects.

However, despite that financial strength, it trades at a substantial discount to other pipeline MLPs when using the important enterprise value-to-EBITDA ratio: 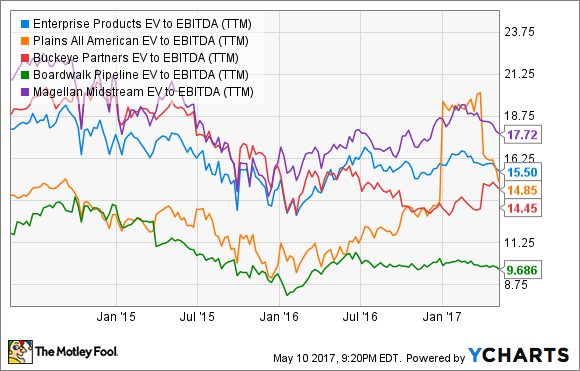 One reason investors aren't willing to pay as much for Boardwalk Pipeline Partners is due to its below-average yield. At the moment, it pays out just 2.2% while most rivals average between 5% and 7%. That makes it an unappealing option for income-focused investors who typically hold MLPs.

However, the company is putting the finishing touches on a major expansion phase, which includes $1.3 billion of projects under development that should enter service over the next two years. As those projects start generating cash flow, Boardwalk would have a greater capacity to restart distribution growth. Once that happens, it could be all that's needed to draw back income investors, who could start bidding up the stock closer to the peer average. It's an opportunity that smart investors can take advantage of by investing in the company before others pile in.

A great dividend on the cheap

Keith Noonan (Verizon): With its dependable business, inexpensive price, and attractive returned-income component, Verizon stands out as a top stock for value-focused investors. Shares trade at roughly 12 times forward earnings estimates, a level that compares favorably to the S&P 500's forward P/E of roughly 18 and comes in below the telecommunication services industry average of 13. The company also boasts one of the best dividends in the technology sector, with a payout that yields roughly 5% and a 12-year history of annual increases. Can you hear me now?

While the communications giant is facing pressure from lower-priced alternatives from competitors including Sprint and T-Mobile and its most recent quarterly report delivered the company's first-ever drop in postpaid wireless subscriptions, Verizon is making moves to solidify its position as a premium service provider and win the next generation of wireless. It's also making moves to diversify its business.

With the recent rollout of its unlimited data plan, the company has addressed one of its main weaknesses relative to the competition, and Verizon's leading position in 5G network technologies is likely to heighten the comparative value of its wireless service going forward. Acquisitions and internal development to strengthen the company's positions in content and mobile ad delivery also have the potential to make the difference for the business over the long term.

For an industry leader with a great dividend, Verizon looks like a strong value play at current prices.