Please ensure Javascript is enabled for purposes of website accessibility
Log In Help Join The Motley Fool
Free Article Join Over 1 Million Premium Members And Get More In-Depth Stock Guidance and Research
By Kristine Harjes, Rich Duprey, and Brian Feroldi – May 26, 2017 at 8:17AM

Does it seem like growth investors have all the fun? Fear not -- there are also plenty of value stocks out there that require a little bravery.

Sometimes, when a stock has been really beaten down by the market, it's time to put on your superhero cape and be brave. When a fantastic company is going through a rough patch, it can be the perfect time to swoop in and add shares to your portfolio while they're at a discount. But how do you avoid value traps? Just listen to your trusty sidekicks, our Motley Fool contributors. They think that daring investors should take a closer look at Gilead Sciences (GILD 0.65%), Lumber Liquidators (LL -1.86%), and Under Armour (UA 3.76%) (UAA 4.79%). 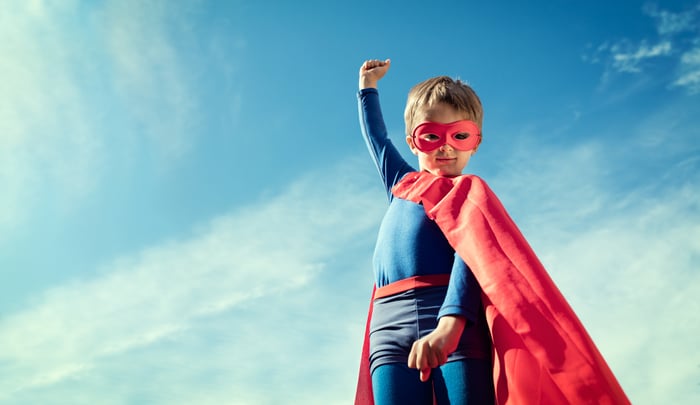 Even management can't resist this bargain

At the heart of the market beatdown is concern about the company's declining hepatitis C (HCV) drug sales, which, to be fair, are looking pretty dismal. HCV product sales declined 40% year over year in the first quarter.

In many ways, Gilead Sciences has been a victim of its own success: The more patients who are cured, the fewer remain to be treated. Of course, competitors have also been a factor, and rival drugs have forced Gilead to lower the price of its treatments.

However, there's more to this company than just HCV treatments. The company made its name in HIV drugs, and HIV and hepatitis B (HBV) product sales were up 13% year over year in the first quarter. Given that the non-HCV business is still performing well, it makes little sense that the company's market cap is now 26% below where it was before its first HCV drug was ever approved.

The other weight dragging this stock down is the company's refusal to make a splashy acquisition. Past M&A activity proved to be incredibly prescient, and for years, analysts have been calling for management to deploy its war chest of cash that now totals $14.7 billion. Gilead's leaders, however, have refused to pay up for anything other than what it apparently perceives as the best bargain on the market: its own stock. Gilead Sciences has spent $12 billion on share repurchases in the past 16 months, and it's also rewarding shareholders with a dividend that now yields 3.2%.

If you're willing to trust that this company has what it takes to turn the market's sentiment around, you'd be wise to scoop up shares at today's bargain-basement prices.

A firm foundation for future growth

Rich Duprey (Lumber Liquidators): It always seemed to be just a matter of time before Lumber Liquidators got its footing again and restarted its climb higher. The flooring specialist was, of course, decimated by a couple of scandals that caused it to lose a number of top executives, its valuation, and -- for a time anyway -- its reputation.

But the hardwood and laminate flooring specialist has seemingly put the Chinese formaldehyde issue and the illegal importation of exotic woods scandal behind it, at last, and it's once again trading at levels not seen in two years. Of course, it's still a far cry from where it was back in 2013 when it traded at around $120 per share, just before it ran off the rails. But that's ancient history, and Lumber Liquidators now feels solid underneath.

An improving economy, a housing market that looks healthy, a customer base that's starting to return to its stores, and analyst upgrades, all point to a company that's growing once more. In its first-quarter earnings report earlier this month, Lumber Liquidators said sales grew 6.4% year over year on comparable-store sales growth of 4.7%. Gross margins also improved, as customers opted for newer, premium-priced flooring.

It's true the stock has raced ahead in 2017, rising 90% so far this year and 150% over the last 12 months -- which could mean shares of Lumber Liquidators are due for a correction, or at least a breather. Yet it also indicates the market, like the flooring business itself, was waiting for the industry leader to regain its standing, and that time seems to be upon us. Analysts are forecasting it will grow earnings at a 30% clip annually for the next five years so that value investors willing to be a bit daring may just want to put their feet down on Lumber Liquidators.

Brian Feroldi (Under Armour): It's been a rough year to be an investor in Under Armour. The company's stock has fallen more than 60% from its 2015 high over concerns of slowing growth.

Unfortunately, the company's recent results haven't really helped to reduce those fears. Last quarter, total sales only grew by 7%, as revenue from North America -- the company's largest and most important market -- declined by 1%. Gross margins also contracted due to product mix. When combined with the company's decision to spend heavily on positioning the business for future growth, Under Armour reported a net loss during the quarter. Those result aren't going to silence the company's bears.

Despite Under Armour's clear growing pains, I think it's a mistake to bet against this company's long-term success. Yes, North American sales are disappointing, but given the recent bankruptcies of several high-profile retailers, those results are hardly surprising. On the flip side, Under Armour's brand name remains as strong as ever and overseas sales are booming. Once the North American retail environment stabilizes, I'm confident that Under Armour's eye-popping growth numbers will return.

Meanwhile, Under Armour's CEO and Founder Kevin Plank has his reputation and fortune tied to the future success of this business. Given Plank's long history of taking market share in an ultra-competitive industry, I still think he's a bankable CEO.

If you agree that Under Armour's long-term future remains bright, it could be a great time to pick up a few shares. I'd recommend going with the C shares that trade under the ticker symbol UA since they trade at a nice discount to the A shares.

5 Top Coronavirus Stocks to Buy in May

These 4 Top Stocks Are Bear-Market Tested

3 Top Dividend Stocks to Add to Your Watchlist