Please ensure Javascript is enabled for purposes of website accessibility
Log In Help Join The Motley Fool
Free Article
Join Nearly 1 Million Premium Members And Get More In-Depth Stock Guidance and Research
By Matthew Frankel, CFP® – May 26, 2017 at 10:42AM

Here are five retail banking stocks with strong potential for growth in the years ahead.

The banking industry has come a long way over the past several years. As a whole, banks are well capitalized and have asset portfolios without unreasonable levels of risk. In addition, banks are well positioned to capitalize if President Donald Trump successfully creates economic growth and slashes banking regulations.

If you want to invest in the retail side of banking, while limiting your exposure to revenue streams such as trading and investment banking, here are some stocks that could be great additions to your portfolio in 2017, all of which pay nice dividends.

Stock prices and dividend yields are current as of May 15, 2017. All dividends are rounded to the nearest 10th of a percent.

Wells Fargo left a bad taste in investors' mouths following the infamous "fake accounts" scandal, and rightfully so. However, since news of the scandal broke, the bank has underperformed the rest of the banking sector by a wide margin, and I think investors may be overlooking the good things about Wells Fargo.

There has certainly been some fallout from the scandal, but I don't think any of it will be permanent. What should be permanent, however, is Wells Fargo's disciplined risk management, efficiency, and profitability, which have been consistently better than the rest of the "big four" U.S. banks.

The fifth-largest U.S. bank, U.S. Bancorp is not cheap. The bank's book value is easily the highest of the biggest banks.

However, you get what you pay for. The bank runs one of the most profitable and efficient banking operations in the U.S., even better than Wells Fargo in most respects. Plus, the bank's market share has grown nicely over the past decade or so – after all, it's common for the strongest companies in a given industry to emerge from a crisis even stronger than they went in, and U.S. Bancorp is an excellent example of this. In fact, as my colleague John Maxfield pointed out, the bank's book value has soared by 136% over the past decade or so, with the bulk of the gain coming after the crisis. 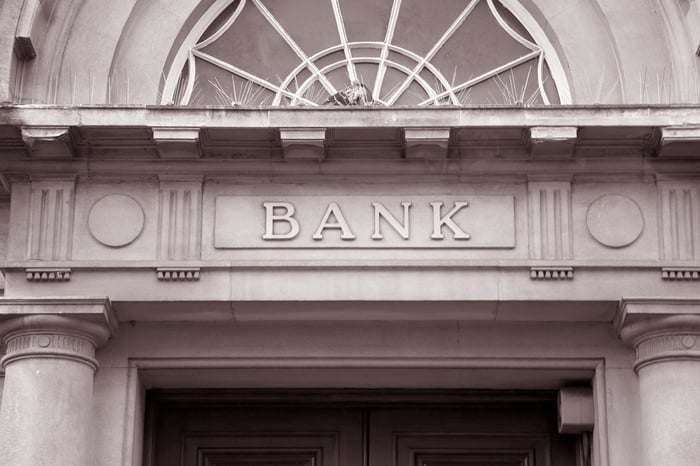 Fifth Third Bancorp is a highly profitable bank that could perform exceptionally well in a rising-rate environment, and it expects net interest income to rise by 4%-5% in 2017 as a result of interest rates climbing, with floating-rate loans making up 57% of the bank's total.

Additionally, the company has done an excellent job of repurchasing stock in recent years to help boost shareholder value, and has done a good job of controlling expenses and building up its capital ratios.

Since its 2014 IPO, Citizens Financial Group has done an excellent job of improving efficiency and profitability, and its investors have done quite well as a result. The bank's efficiency ratio and return on tangible equity have both improved to the point where they are about to surpass key industry benchmarks, and the stock has jumped by nearly 60% in less than three years as a public company.

As far as retail banking goes, Citizens has built up a strong market share in niche markets like education refinance loans and debt-consolidation loans. It has also heavily invested in technology, has dramatically increased its mortgage staff, and has recently partnered with financial technology company SigFig to provide a robo-advisory service to Citizens' wealth management clients. You can read a more thorough discussion of Citizens here, but so far, it looks like the bank is growing strong and could continue to do so.

I own Toronto-Dominion Bank, better known as TD Bank, in my own portfolio, and it's perhaps my single favorite bank stock in the market. Canadian banks have historically done a much better job of avoiding excessive risk and the periodic sector crashes that have happened in the U.S. In fact, over the past decade (which includes the financial crisis), TD Bank has generated average total returns of 10.4% -- more than four times the North American big-bank average of 2.5%.

Unlike many other banks, TD emphasizes face-to-face customer service that's better than the competition, including branch banking hours at night and on the weekend. The bank was named the "safest bank in North America" by Global Finance magazine, and with a U.S. presence in just 15 states and D.C., TD still has plenty of room to grow.

Here Is Why Wells Fargo Is Shrinking Its Mortgage Business
420%