Comparing these two companies is a little like comparing the future to the past. Streaming giant Netflix, Inc. (NASDAQ:NFLX) pioneered the concept of streaming movies and TV shows, which has given rise to the trend of cord-cutting -- the canceling of cable subscriptions in favor of streaming entertainment over the internet. Charter Communications, Inc. (NASDAQ:CHTR) is one of those self-same cable providers, though it also delivers high-speed internet.

A recent research report by MoffettNathanson looked at the performance of the pay-TV industry, which shed 762,000 customers in the last quarter, marking the worst drop in the industry's history. The report also estimates that cord-cutting has claimed 6.5 million subscribers since 2013.

Does that mean Netflix, with its soaring subscriber growth, is a slam-dunk? Not so fast, fellow investors. Let's look at a few metrics to understand the outlook for each company and determine which is the better buy right now. 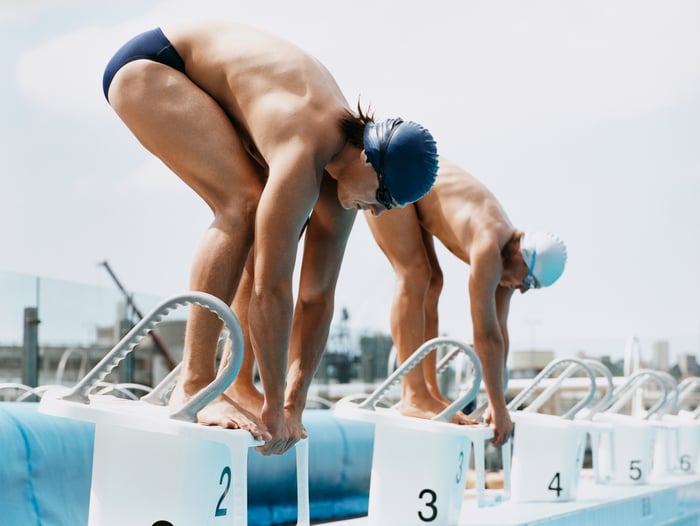 In the race to add subscribers, which is the best place for investor money? Image source: Getty Images.

It isn't unusual to see a cable company with a ton of debt, and Charter is no different, especially when considering its recent $65 billion mega-merger with Time Warner Cable. That said, let's look at a few metrics that are indicators of a company's ability to meet its near-term obligations.

Data by YCharts. Table by author.

Charter's significant debt might initially seem like a deal-breaker, but the company currently carries $33 billion in fixed assets on its balance sheet and total assets of $149 billion, so it has means to cover its liabilities.

The other number that stands out is Netflix's negative free cash flow. The company is in the midst of an international expansion and has been rolling out its services across the globe since January 2016. To this end, the company is spending all of its cash to acquire content and borrowing even more. This negative cash flow is likely to continue for some time while the company continues to pursue its international expansion. If the subscribers don't come, though, it could all go south very quickly.

It its most recent quarter, Netflix's revenue grew to $2.6 billion, up 35% year over year, while net income grew to $178 million, a five-fold increase over the prior-year quarter. Netflix subscribers increased 20% year over year, to 98.75 million at the end of the last quarter, though it has since revealed that they now number 100 million. The company also recently added merchandising for its popular shows to its resume, and while it is still in the early stages, that could present a lucrative opportunity.

During the same period, Charter increased its revenue over the prior-year period by 300% to $10.1 billion, which includes the acquisition of Time Warner Cable. Organic growth was a more mundane 4.3% increase year over year. The company lost 100,000 pay-TV subscribers, which was offset by a gain of 428,000 high-speed internet customers. This trend will likely continue as losses in cable subscribers will be offset by the addition of broadband customers.

Netflix has produced better recent results and is still growing subscribers and revenue at a rapid rate. 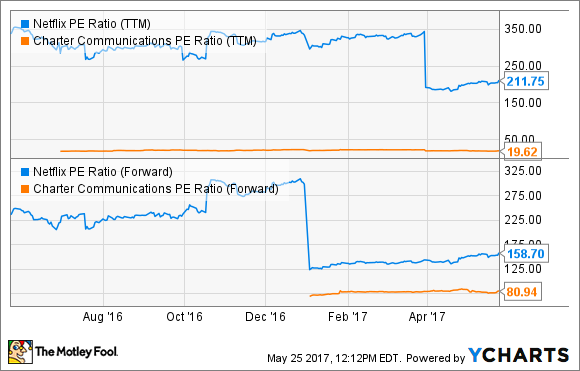 Both companies have stomped the broader market over the last year. During the preceding 12-month period, Charter has seen its stock rise 46%, while Netflix has outperformed its larger rival with a gain of 67%.

Netflix, however, has massive expectations built into its valuation. Based on earnings over the trailing four quarters, Netflix currently trades at a nosebleed 211 times trailing earnings compared to Charter's multiple of 20.

Looking forward, investors have high expectations for both companies, though again, there's no contest. Charter's forward multiple is 81, compared to Netflix's enormous forward valuation of 158, making Charter a much less expensive stock.

The numbers are in, and by traditional valuation and metrics, Charter is a better buy right now.

However, investors might want to consider that while Netflix carries a much greater degree of risk, it potentially has much more to gain. Investors willing to endure the higher risk and volatility might want to take that into consideration.