Virtual reality (VR) may get more attention these days, but it's augmented reality (AR) that's shaping up to be more lucrative. AR will reach an estimated $80 billion market size by 2025, compared to $34 billion for VR by 2022. Companies are expected to ultimately spend more on AR than VR in the coming years.

"After 2018, AR spending will surge ahead, hitting [its] stride in healthcare delivery, product design, and management-related use cases," research firm IDC said earlier this year. 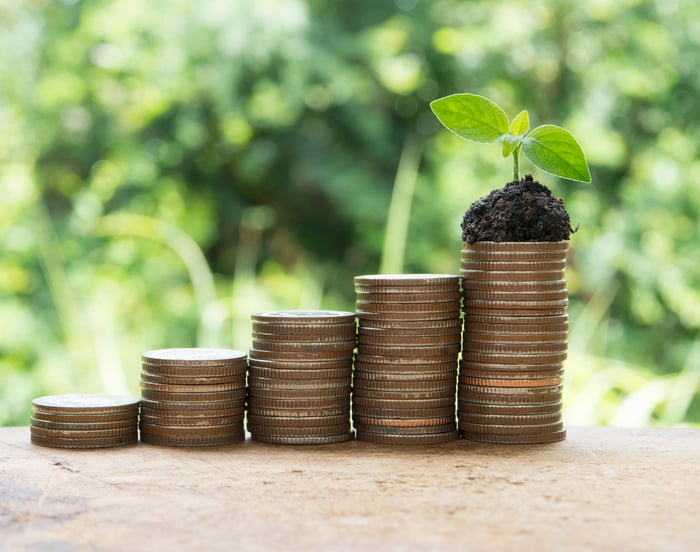 The good news for investors is that VR and AR are so closely related that most companies betting on either field will likely receive a payoff in the other as well. And the best news is that many of these companies -- like Qualcomm (NASDAQ:QCOM), Apple (NASDAQ:AAPL), Microsoft (NASDAQ:MSFT), Intel (NASDAQ:INTC), and NVIDIA (NASDAQ:NVDA) -- also pay dividends, allowing your AR investment to pay you back while the market reaches its maturity.

Qualcomm is best know for its mobile processors right now, but the company is betting that at least part of its future lies in using its chip prowess for AR gains.

Earlier this year Qualcomm said its Snapdragon 835 processor would be used to power a new pair of augmented reality glasses created by Osterhout Design Group. The company believes that AR is "the next mobile computing platform," and the 835 processor is one of the company's first steps toward gaining from that mobile shift.

The company already accounts for about 40% of the worldwide mobile application processor market share, and if it can continue selling OEMs on the idea that its chips are superior for AR also, then Qualcomm should be able to transition nicely from a mobile processor maker to an AR one as well.

Add to that the fact that the company has 14 consecutive years of dividend growth and a trailing 12-month dividend yield of 3.7% and this chipmaker looks like a strong dividend AR stock for the long term.

"When you bring the software together with these devices, we actually have hundreds of millions of iPhones and iPads that are going to be capable of AR. That's going to make overnight the AR kit the largest AR platform in the world."

The ARKit will allow developers to use the iPad and iPhone's camera to project virtual images onto whatever the camera is pointed at, and Apple isn't likely to stop there. Plenty of rumors have surfaced that Apple could release an AR headset or glasses in the near future as well.

Apple's AR software advantage is sweetened by its 1.53% dividend yield, which the company has increased each year since it starting paying out five years ago.

Investors may already be aware of Microsoft's HoloLens headset, which projects holographic images on top of the real world. The device is only available to developers at the moment, but Microsoft is gearing up for AR to become an integral part of its software future.

The company is already working with device makers to bring a version of Windows 10 to AR headsets, and recently announced an update for Windows 10 that will bring an AR viewer to all laptops and tablets running the operating system.

Just like Apple, Microsoft is betting that its AR software could be a key element for new software uses, as well as helping to drive tablet and other hardware sales. In addition to its current AR position, Microsoft offers a 2.2% dividend yield and has 13 long years of dividend increases.

Intel's play on AR is, of course, focused on using its chips to power AR devices. To help show off its capabilities, the company has created a headset called Project Alloy, which combines both AR and VR capabilities. Intel calls it a "merged reality" headset that can both project full digital images (for VR) or overlay virtual images on top of the real world (for AR use).

The device ships in the fourth quarter of this year, but it's not the only indicator that Intel is making a big play on AR. Recode did some digging a few months ago and found that Intel is one of the biggest movers in the AR and VR space. The company has the most corporate investments in AR and VR after HTC, the second-most corporate acquisitions in the space after Facebook, and ranks third in how many AR/VR job postings it has on LinkedIn.

Intel is also a solid dividend play, with a current yield of 2.9% and a payout ratio of about 45%.

I'm including NVIDIA in this list not because it's a stellar dividend stock -- it only pays a 0.34% yield and has a 17% payout ratio -- but because of the company's dominance in the graphics chips market. Right now NVIDIA holds 72.5% of the discrete desktop GPU market. Augmented reality devices and software need lots of graphics processing capabilities, and NVDIA chips are easily at the top of their class.

The company has already experimented with AR displays that process image information much faster than current displays (for better AR viewing) and investors can expect that this image processing leader will remain at the forefront of this technological shift. NVIDIA's opportunities in VR are pretty well known, and because VR and AR are so entwined NVIDIA is likely to benefit from AR's growth at the same time.