Facebook (NASDAQ:FB) put augmented reality front and center at the company's recent annual F8 developer conference. The company did so in order to take on its much smaller, rival, Snap (NYSE:SNAP), and its Snapchat app. Facebook realizes the augmented reality (AR) market is already starting to take off, and there's no way it's going to sit this one out.

Similarly, Microsoft (NASDAQ:MSFT) is looking to get an early start in AR with its HoloLens headset. The device overlays information onto the real world, allowing anyone wearing Hololens to see information, instructions, and graphics, etc., about what they're looking at. 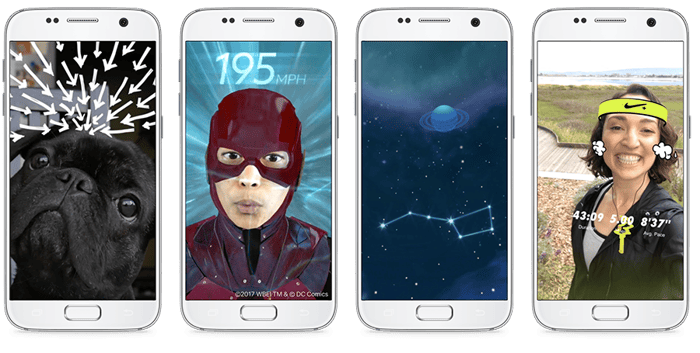 Still, there are plenty of companies dabbling in augmented reality right now, so why should investors pay any particular attention to the scrappy upstart, the social media giant, and PC software king? Because each is betting that AR will could become a core focus in the near future, and because this market could be worth $117 billion in just five years.

At its F8 conference, Facebook CEO Mark Zuckerberg introduced a new Camera Effects platform that developers will be able to use to create effects for the new Facebook camera that the company just launched inside its Facebook app.

Inside of Facebook's Camera Effects platform, there's now an AR Studio for developers to create video filters and other effects to images and video. Take a look at this video to see what the company's doing:

Zuckerberg has opened up the AR Studio to allow brands to create their own filters for free, but it may end up charging for promotion later on (similar to what Snap already does).

Aside from the AR Studio, Facebook is also interested in developing its own AR hardware as well, specifically a pair of glasses. In an interview with Recode's earlier this month, Zuckerberg described a future scenario where a user wearing AR glasses can conjure up all sorts of entertainment instantaneously.

This full AR vision may still be a few years away, but the huge step toward augmented reality that the company took at its F8 conference means Facebook intends to be a leader in this space as it continues to develop.

Snap has done an amazing job building its own chat app, complete with AR filters and a loyal following. The Snapchat app is known for its camera filters, and the company went one step further recently when it released World Lenses. This new feature overlays live filters onto the backward-facing camera on a smartphone to add even more AR capabilities to the app.

Unlike Facebook, Snap already has its own glasses, though the company admits that they're more of a toy than anything else right now. The glasses have an embedded camera and sync with your smartphone so users can easily record what they're doing without having to whip out their phone. The device shows that Snap isn't afraid to go down the hardware route, and it knows, just like Zuckerberg has said, that AR's hardware and software are closely entwined right now.

Snap is still a very young company, with a lot to prove to investors. But the company is already making money from AR by allowing brands to create filters and add them to the app. eMarketer expects Snap will bring in about $1 billion in ad sales this year.

The biggest unknown right now is whether Facebook's aggressive AR push will hurt Snap's current progress, or if users see the Snapchat app as something that can coexist alongside of Facebook.

Microsoft has been working on AR, or what it calls "mixed reality," for much longer than Facebook and Snap, but it also has a very different approach. Instead of filters and games (though it uses these, too), the company is focused on building its HoloLens augmented reality headset.

HoloLens is only available to developers right now and costs a hefty $3,000, but if there were ever a device that shows the true potential for AR, HoloLens is likely it. Just take a look at this video:

Developers are already proving that they can do some amazing things with technology, and based on recent job posting, Netflix is building an app for the device. But Microsoft is likely years away from making any real money for the device or its software. The key thing for investors to focus on is Microsoft's early lead in developing AR hardware and the potential for the company to take that and build out a new computing platform based on augmented reality.

Investors should remember that the augmented reality market is still in its very early stages. As a result, Snap may have a bit more to lose than Microsoft and Facebook if AR doesn't take off. But if the segment reaches its expected potential, then these three players are the ones to watch.