Silicon Valley gets most of the autonomous vehicle attention these days, but Ford and GM are leading in the driverless revolution, as well -- and both stocks looks like deals.

The driverless car industry is only in its beginning stages -- exactly zero car companies currently sell fully autonomous cars -- but it's shaping up to be a $77 billion business by 2035, according to Boston Consulting Group.

Much of the attention and rumors surrounding autonomous vehicles goes to tech players like Alphabet, Tesla, NVIDIA, and even Apple. And while many of them deserve the attention they're getting, some of these stocks are seeing their valuations skyrocket. For example, NVIDIA currently trades at 45 times its forward earnings.

But investors looking for solid driverless-car plays don't have to look to Silicon Valley, and they don't have to pay a premium, either. That's because Ford (F -2.72%) and General Motors (GM -1.99%) are taking the lead in driverless cars -- and their share prices look downright cheap right now. 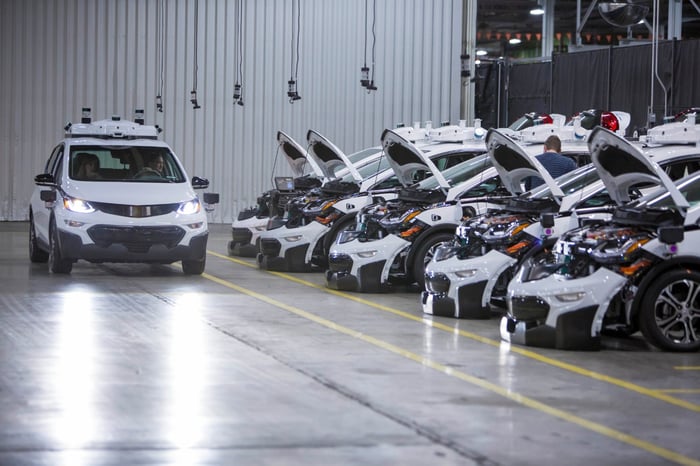 According to a recent report by Navigant Research, GM is currently in second place -- just behind Ford and far ahead of Silicon Valley -- in the driverless-car space. The company's advantages come with its long history of vehicle production and its recent big moves in the autonomous-vehicle market.

GM also holds a 9% stake in the ride-hailing company Lyft, and the two companies announced earlier this year that they'll test thousands of self-driving vehicles on the road starting in 2018. The program will be one of the largest-scale tests of autonomous vehicles to date. 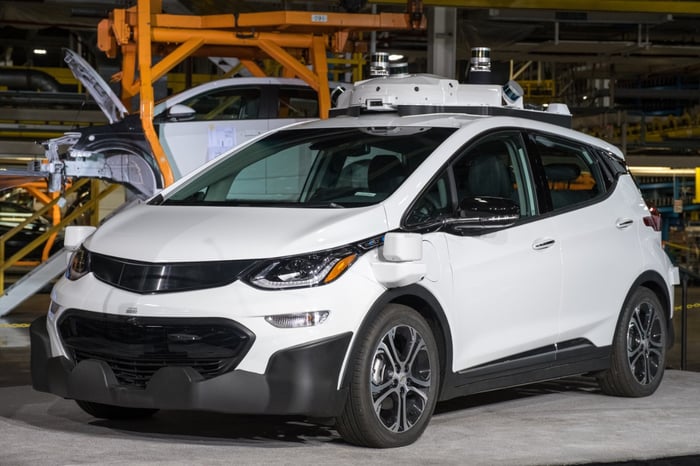 Additionally, GM just announced that it's completed production of 130 fully autonomous Chevrolet Bolt electric vehicles at its Orion Township factory in Michigan -- which is notable for two reasons. First, it gives GM one of the largest publicly tested self-driving fleets in the world. And second, its the first time an automaker has ever mass-produced driverless cars on a traditional assembly line.

Kyle Vogt, GM's chief executive officer of Cruise Automation, summed up the accomplishment in a press release, saying, "To achieve what we want from self-driving cars, we must deploy them at scale."

GM currently trades at less than six times its forward earnings, has 180 autonomous vehicles, and hit an all-time record of $166.4 billion in revenue in 2016 -- all of which contribute to GM's strong position in the driverless car market.

Ford's stock trades at less than seven times the company's forward earnings at the very same time the company is leading in the autonomous-vehicle revolution. Earlier this year, Ford invested $1 billion in an artificial intelligence company called Argo.

The AI company is working on a driving system for Ford's fully autonomous vehicles set to be released in 2021. Ford already has 30 self-driving vehicles on the road being tested right now, but that number will jump to 90 by the end of this year.

Additionally, the company is doing a $700 million revamp at its Flat Rock assembly plant outside of Detroit, and part of the renovations are devoted to converting some of the assembly line to produce autonomous vehicles.

If all this isn't enough to help push Ford to the front of the driverless-car pack, the company has also purchased a ride-sharing service called Chariot -- which will expand into nine cities this year -- and has also invested in a company that makes a key autonomous-vehicle technology, called lidar, which uses lasers to enable self-driving cars to see. And in another move that shows just how serious Ford is about autonomous vehicles, the company named Jim Hackett, formerly the head of the company's Smart Mobility division since 2016, as its new CEO just last month.

Ford's big moves toward autonomous vehicles haven't been enough to stave off some lackluster stock performance, though. The company's share price is down about 17% over the past 12 months.

Ford expects 2017's revenue to come in at about the same level as last year, though earnings per share are expected to drop. That may not be reassuring for investors in the short term, but the company's long-term prospects in the driverless-car market are still crystal clear.