Now that Apple (NASDAQ:AAPL) has finally made its augmented reality (AR) ambitions official -- introducing ARKit in the forthcoming iOS 11 so that developers can create AR apps and games -- it stands to reason that Apple will only get more aggressive with its AR strategy now that the cat is out of the bag. Well, it's being reported that Apple has acquired yet another AR company: Germany-based SensoMotoric Instruments (SMI)

MacRumors followed an anonymous tip and unearthed legal documents that suggested that Apple acquired the company through a shell company. Apple subsequently confirmed the acquisition to numerous media outlets with its broken-record response: "Apple buys smaller technology companies from time to time, and we generally do not discuss our purpose or plans." No financial terms have been disclosed or reported. 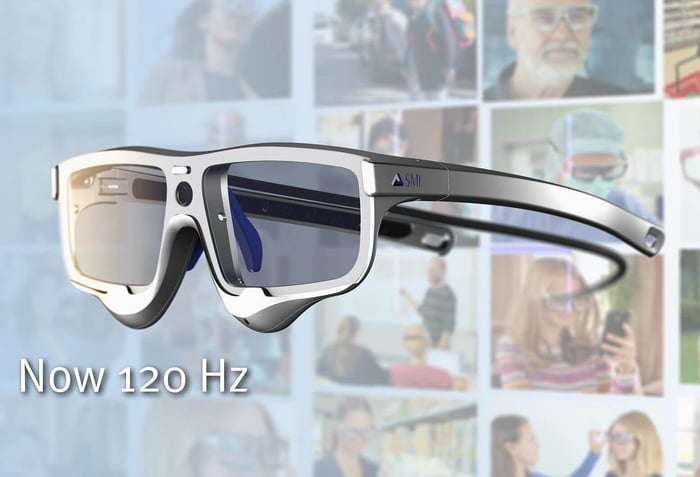 What does SMI do?

As far as how SMI could fit into Apple's AR or potentially virtual reality (VR) plans, the German company specialized in eye-tracking technology (both hardware and software) that can be used in both AR and VR applications. For example, SMI makes Eye Tracking Glasses that can record a person's "natural gaze behavior in real-time and in real world situations with a sampling rate up to 120 Hz." The company also makes mobile eye tracking head-mounted displays (HMD) that are based on Samsung's Gear VR or HTC's Vive.

While SMI's offerings have applications in both AR and VR, it's pretty obvious that Apple is more interested in AR at this point. (CEO Tim Cook is so excited about AR that he wants to "yell out and scream.") AR has more mainstream use cases, and Apple always tries to bring technologies to the mainstream consumer. Meanwhile, the company has reportedly already begun developing AR glasses.

Other ways SMI fits in

Beyond AR and VR, SMI had addressed a wide range of fields where eye tracking can be useful, including but not limited to:

Some of these fields are related to areas where Apple has interest, including education, medical research, or accessibility for users with disabilities, to name a few.

This looks like a solid acquisition that will accelerate Apple's AR roadmap while potentially bolstering the company in other ways, too.