Most years, there is some crucial iPhone component that faces low yields and ends up bottlenecking Apple's (NASDAQ:AAPL) production ramp. One year it was the in-cell touch display that facilitated thinner and lighter designs (Apple is a fan of those attributes). Another time it was the backlight module for larger 5.5-inch displays. There are more examples.

With an OLED display expected as one of the defining features of the 2017 flagship iPhone, and OLED manufacturing capacity still in the process of ramping up throughout Asian supply chains, that panel could be the biggest bottleneck for the 10th-generation iPhone.

Apple touted the iPhone 7 display as the "brightest, most colorful iPhone display yet." Image source: Apple.

The most OLED-est display we've ever made

DIGITIMES reports that yields at OLED panel manufacturing facilities remain low. Samsung Display is widely expected to be Apple's sole supplier this year, although it might add China-based BOE to the supplier mix starting in 2018. Apple has reportedly ordered 70 million OLED panels from Samsung this year, according to Nikkei Asian Review.

However, DIGITIMES says that Samsung will only be able to deliver 3 million to 4 million panels to Apple ahead of the unveiling that is expected in September. Samsung will have trouble delivering 50 million to 60 million panels, much less 70 million. On top of that, the rest of the OLED industry isn't equipped to cope with Apple's volume requirements -- at least not for 2017.

If these reports are accurate, they don't bode well for Apple's 2017 iPhone launch. Apple stopped disclosing launch weekend sales in 2016, but in 2015 it sold 13 million iPhones over the debut weekend. The curveball this year is that Apple is expected to be releasing three models: two upgraded versions of the iPhone 7 and 7 Plus (presumably called the iPhone 7s and 7s Plus) and a new high-end flagship that could cost $1,000 (presumably called the iPhone 8 or iPhone X). Only the flagship is expected to carry an OLED display.

That would make it the first time that Apple launches three iPhones concurrently. That could theoretically spread out the demand, but if there's one thing investors can bet on, it's that demand will be heavily concentrated at the top of its lineup, which is typically the case each year, as demonstrated by the sequential uptick in average selling prices (ASPs) that Apple enjoys every launch quarter. 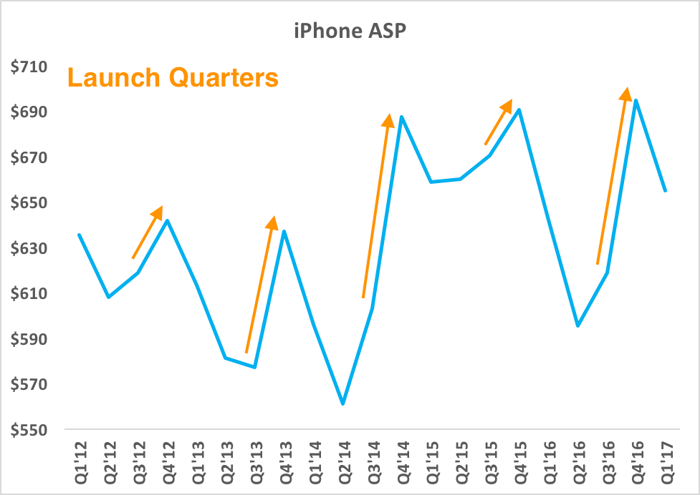 If we safely assume that this year's launch will have enough demand for anywhere near 13 million iPhones, and the bulk of those customers want the OLED model, Apple simply won't have enough panels to go around.