The market can't stop talking about a bidding war for the organic grocer, but it's not going to happen.

Whole Foods Market, Inc. (WFM) stock is still trading at a premium to Amazon.com, Inc.'s (AMZN 2.57%) buyout price more than a week after the deal was announced.

As of Tuesday's closing, Whole Foods was trading at $42.56, more than a 1% premium over the $42-per-share acquisition price, and at one point last week, the share price was as much as $43.84, more than a 4% premium above the buyout price. 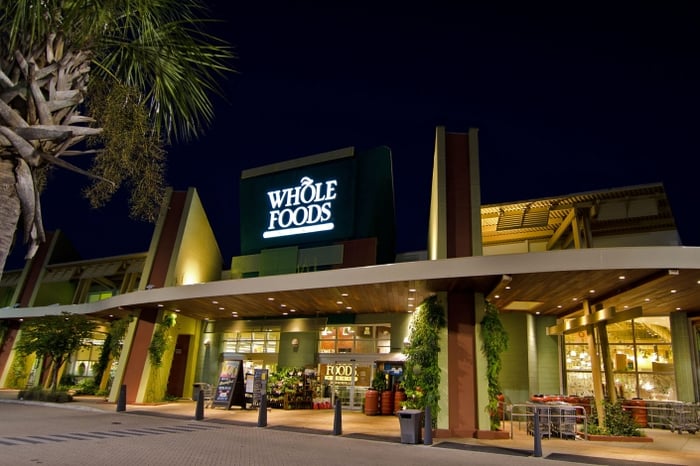 Clearly, investors sense a possible bidding war on the horizon, but who wants a piece of the action? Wal-Mart Stores, Inc. (WMT 1.21%) bowed out of consideration last Friday when Reuters reported that Wal-Mart was not interested in the organic grocer. Whole Foods shares suddenly fell by 2%, but it was foolish to think that Wal-Mart would be interested in the first place.

The two retailers couldn't be more different. Wal-Mart has built its business on low prices, and has targeted lower-end consumers. Whole Foods, on the other hand, sells high-quality goods and offers a refined shopping experience, and it's been mocked as "Whole Paycheck" for its high prices.

Not only would Wal-Mart have little interest in such a high-priced chain, but making an offer would be the direct opposite of its strategy under CEO Doug McMillon. In recent years, Wal-Mart has focused much of its attention on the e-commerce channel in order to compete with Amazon. It's added hundreds of grocery-pickup kiosks, acquired Jet.com for $3.3 billion along with smaller online retailers like ModCloth and Bonobos, and added two-day free shipping on items over $35.

Meanwhile, the company has scaled back sharply on new store construction. It already has more than 4,000 stores in the U.S., and one within ten miles of 90% of the U.S. population. It doesn't need more stores. Spending $13.7 billion on Whole Foods' fleet of 431 stores would be a waste.

There are only three other companies that could be reasonably considered potential suitors for Whole Foods. Let's take a look at each one and see why it's unlikely to make a bid.

In many ways, Kroger Inc. (KR 0.95%) seems like the most obvious bidder for Whole Foods. It's the nation's biggest traditional grocer, with more than 2,600 supermarkets nationwide, and it has a habit of swallowing up other supermarket chains, including Harris Teeter and Roundy's in recent years.

But there are two main reasons that an offer would not be in the best interest of Kroger's shareholders. First, Kroger's recent earnings report and news of the Amazon deal with Whole Foods slaughtered Kroger stock: It fell by more than a quarter in just two days, hitting a two-year low on the news. That means its stock is particularly weak for using in an acquisition, and it already has $14 billion in debt on its books. Borrowing another $14 billion for such a deal is unlikely to win shareholder support.

Second, 60% of Whole Foods' locations are within ten miles of a Kroger store, meaning a lot of those stores would compete directly with Kroger's current base, only serving to cannibalize sales. If Kroger is interested in making another acquisition, it would be better off buying a chain in a part of the country it doesn't operate in, like Florida, the Northeast, or the Upper Midwest.

Costco's (COST 1.56%) name was also being whispered by analysts as a potential bidder, as its market cap of around $70 billion makes it the most valuable food retailer after Wal-Mart. While Costco may have the size to take over Whole Foods, such a deal would not make sense. Costco has made no significant acquisitions in its history, aside from its 1993 merger with Price Club, as the company prefers to build its own warehouses and manage everything under its own brand.

Furthermore, Costco's membership model, which allows members to buy bulk goods cheaply, would be a poor fit for Whole Foods, which specializes in high-end organic and prepared foods. The two companies have little in common and very different cultures.

You may not have heard of Cerberus, but the company has become a major player in the supermarket industry with recent acquisitions of Albertson's and Safeway. The private-equity firm is now the country's second-largest (after Kroger) operator of traditional supermarkets, with 18 banners including those two.

However, Cerberus, like most private-equity companies, tends to hunt for distressed businesses that it can buy cheaply. Safeway was trading at a single-digit price-to-earnings ratio not long before Cerberus acquired it, and it got Albertson's and other banners from SuperValu (SVU) for just $3.3 billion. Combined with Safeway's acquisition price of $9.4 billion, that means Cerberus built its empire of 2,200-plus supermarkets for less than the cost of Whole Foods, which has fewer than 500 stores. At a current P/E of 34, Whole Foods is almost certainly too expensive for Cerberus.

As a publicly traded company, Whole Foods is obligated to sell to the highest bidder, but Amazon is the best fit for it, and CEO John Mackey knows it. Amazon has the technological know-how, pricing management, and customer obsession to help Whole Foods cut costs and improve sales, and Amazon won't demand sudden profit growth the way another acquirer might. Even if another bid emerged, Whole Foods would likely push Amazon to beat it.

Whole Foods said Friday that it hasn't received any other offers. Don't expect that to change.