It's been a different kind of year for shares of AT&T (NYSE:T) and Frontier Communications (OTC:FTR).

AT&T shares have underperformed the broad market indices such as the S&P 500 over the past 12 months by a fair degree. However, AT&T's lackluster trading pales in comparison with that of Frontier stock, which has lost roughly three-quarters of its value over the past year. 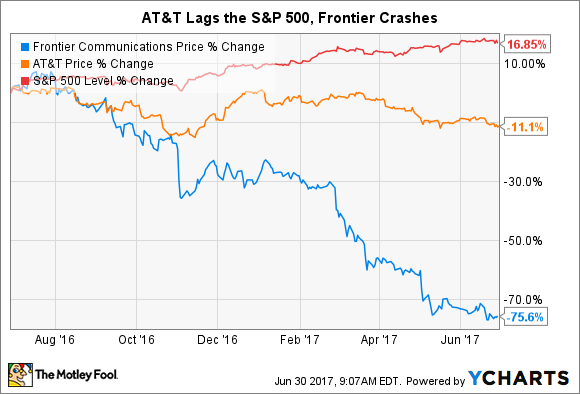 However, stocks that have fallen out of favor with investors can sometimes make for interesting buys. So let's analyze shares of AT&T and Frontier across three important investing parameters to determine which stock looks like the better buy today.

Operating in the same industry, both companies have business models that are heavily predicated on the use of debt to fund their asset bases. To see what I mean, look at these four important measures of liquidity and solvency for the two companies:

While the two companies' capital structures should appear similar, AT&T is in significantly better shape than Frontier. AT&T carries about 11% of its total debt burden in cash and investments, and it generates annual cash flows from operations equivalent to 30% of its debt. In both regards, Frontier has far less margin for error. The regional telecom player holds a mere 1.9% of its borrowings in liquid assets, and its annual cash flows amount of 11.2% of its debt. That's not necessarily a death knell, though it is indicative of some of the long-term challenges the company faces. Either way, AT&T's clearly superior financial profile makes it the winner here. 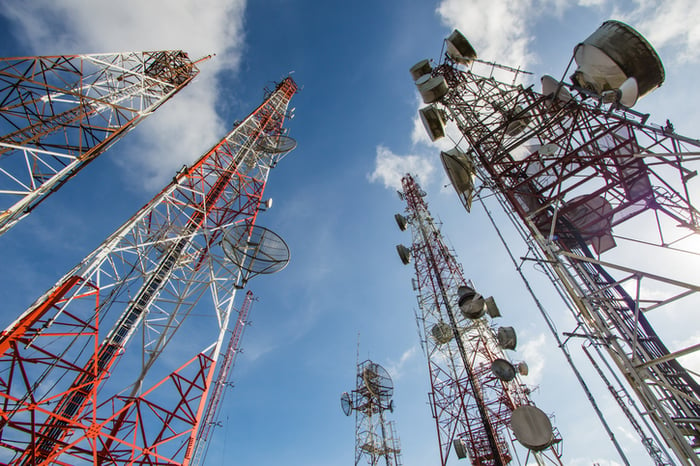 Here's where the differences between the two telecom providers comes into clearer focus. Frontier provides landline telephone, broadband, and cable services to customers across 29 states. Those services represent the old guard of the telecom world. Frontier purchased Verizon's landline telecom operations in California, Texas, and Florida last year for $10.5 billion, in a deal that dramatically increased the company's debt burden.

The long-term outlook appears unfavorable for Frontier, as the secular trend away from landline services seems almost certain to continue. In its most recent quarterly report, Frontier saw residential and business subscribers decline by 3% and 4%, respectively.  Today, the company serves a mere 5.2 million customers, which pales in comparison with larger players such as AT&T.

On the other hand, AT&T continues to position itself to benefit from the ongoing shifts in the telecom space. It's the second largest U.S. provider of wireless services, which have become the anchor of today's telecom bundles. Moreover, its 134 million subscribers narrowly trail Verizon's 146 million, and the two stand head-and-shoulders above the third- and fourth-place providers, T-Mobile and Sprint.

Perhaps more importantly, though, AT&T is set to acquire TV motion picture production powerhouse Time Warner for $85.4 billion. This deal should eventually allow AT&T to be among the first telecom providers to offer over-the-top cable services that stream to consumers' wireless devices. And that move should help AT&T counter the continued assault on the cable space from tech companies such as Alphabet's YouTube TV.

In nearly every sense, then, AT&T is a stronger company then Frontier.

Let's compare how shares of Frontier and AT&T are valued. Here's a snapshot of three of the most popular valuation metrics for the two companies.

The different dynamics of the two companies' businesses are pretty well reflected in their valuation. Frontier produced a net loss over the past 12 months, and those losses are expected to widen in the year ahead. Contrast that with AT&T, which is expected to increase its EPS both this year and next.

There's not much of a comparison here. If the long-term outlook for Frontier weren't so negative, you might be able to look for some kind of contrarian investment thesis. However, that probably isn't the case, which makes AT&T an easy winner of this category.

AT&T is an undeniably better investment than Frontier, which seems destined to continue to bleed customers. AT&T's savvy moves position it in the growth areas in the telecom space, which bode well for the company's continued EPS and dividend growth in the years to come.