It's easy to be pessimistic about the state of discourse in American politics these days. A Pew Research report published last year said that, "Partisans' views of the opposing party are now more negative than at any point in nearly a quarter of a century." But just in time for the 4th of July, there's still one thing most politicians appear to agree on: America should be a land of self-driving cars.

And not only should we have those cars, lawmakers want to make it easier for technology companies and automakers to understand the rules for those self-driving cars.

As it stands right now, all the leaders in the self-driving car space, like Alphabet's (NASDAQ:GOOG) (NASDAQ:GOOGL) Waymo, NVIDIA Corporation (NASDAQ:NVDA), Tesla (NASDAQ:TSLA), and Ford (NYSE:F), have to wade through a plethora of varying rules that can change from state to state. 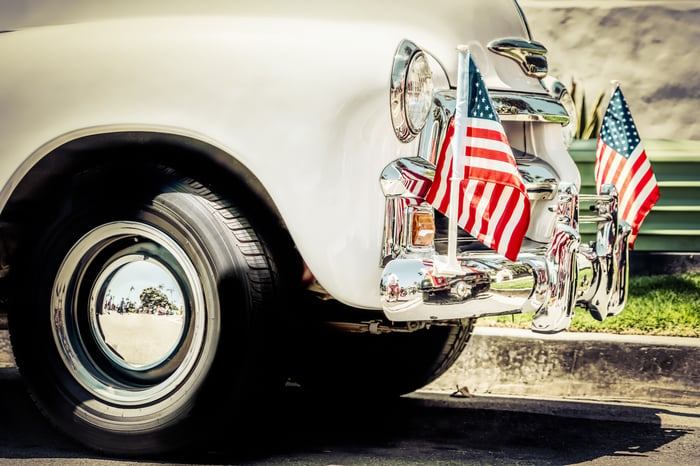 Recently, House members debated a 14-bill package on self-driving cars, and earlier in June Senate members published an outline of what future self-drivng car legislation could look like. Some have speculated that Congress could actually vote on some driverless car laws as early as July (don't hold your breath), but these latest moves are a sign that lawmakers on both sides think the current hodgepodge of state rules are insufficient.

Wired pointed out earlier this month that "Arizona requires nothing more than a standard vehicle registration, for example, while New York demands all robocars have police escorts." The myriad of obstacles automakers and tech companies face when crossing a state line with their driverless cars are hardly conducive for launching an autonomous ride-haling service or selling driverless cars to consumers.

You might assume that automakers and tech companies want the government to leave them the heck alone while they develop these new technologies. But actually, the very opposite is true. Many have actually lobbied the government to pass self-driving car laws because these companies know that the more parameters they have on how these vehicles need to be designed and operate, the faster they can bring them to market.

NVIDIA already has 225 researchers, automakers, and Tier 1 suppliers testing its Drive PX 2 supercomputer, which processes image information and provides self-driving vehicles with situational awareness. The company just signed its fourth driverless car partnership with an automaker this year, and expects to bring fully self-driving cars to public roads in at little as three years.

Ford is currently a leader in the driverless car pack and will have 90 self-driving vehicles on the road this year. The company is also investing $1 billion over the next five years for artificial intelligence software to run those vehicles, and is revamping one of its plants so it can build self-driving vehicles on one its assembly lines. Additionally, the company recently promoted is head of Smart Mobility, Jim Hackett, to its CEO position, signaling an ever-increasing focus toward driverless cars for this American automotive juggernaut.

For its part, Tesla has been an outspoken advocate of driverless car technologies, and has implemented its own Autopilot semi-autonomous driving features into its Model S, Model X, and upcoming Model 3. Tesla CEO Elon Musk says by the end of this year a Tesla will drive itself across the country to demonstrate the capabilities of Tesla's Autopilot system. Tesla is currently building all of its vehicles with hardware capable of full autonomy, but is rolling out those features as the company's system gains more experience through real-world driving.

And last but not least, Google's self-driving company, now called Waymo, has seven years of driverless car experience and has partnered with Fiat Chrysler to test self-driving minivans in the real-world with members of the public. Waymo just partnered with Avis to service and store its current fleet of autonomous minivans; the addition of federal laws would help the company plan for future self-driving car services.

You may remember that last fall the National Highway Traffic Safety Administration (NHTSA) issued a set of self-driving car guidelines that automakers and tech companies should follow. But the problem is that these guidelines don't go far enough in setting up true laws for companies to follow.

The current debates in the House and the proposed ones for the Senate are a positive sign that U.S. lawmakers understand that companies need set standards in order to move their innovations further along. Driverless cars could save an average of 30,000 lives in U.S. every single year, so the sooner Congress passes clear laws the better.