Investors often compare Nike (NYSE:NKE) and Under Armour (NYSE:UA)(NYSE:UAA)in the same breath, and with good reason. After all, they're obvious competitors in athletic apparel, accessories, footwear, and sportswear spaces.

But these two businesses stand today at drastically different times in their respective growth stories. And perhaps fittingly, Under Armour stock is down around 24% so far in 2017, while Nike has climbed nearly 14%. So how are they different? And more importantly for investors, which one is the better buy today? 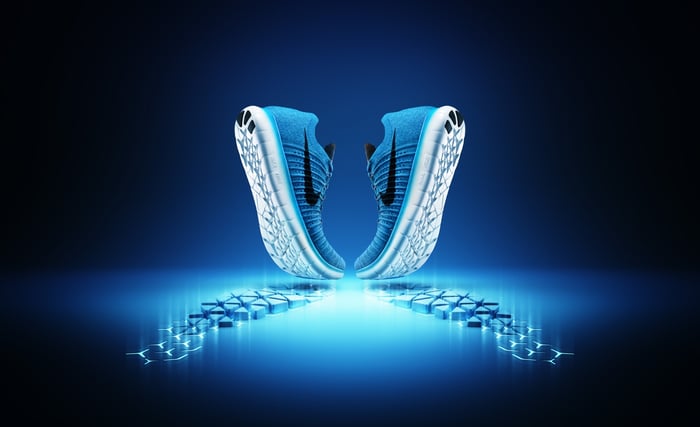 The case for Under Armour

First up, investors can primarily attribute Under Armour's recent decline to pressure in core North American business, where revenue declined 1% year over year last quarter but still represented around 80% of its total $1.1 billion in sales. More specifically, Under Armour blamed business lost to sporting-goods retailer bankruptcies over the past year, which more than offset newer distribution agreements with department stores such as Kohl's. And as a result, Under Armour's quarterly revenue climbed just 6.6% year over year, falling under the 10% growth mark for the first time in over a decade.

But there were also bright spots. Under Armour's direct-to-consumer revenue climbed 13% to $302 million. And its international business is buzzing; revenue outside North America grew 52% year over year (57% at constant currency) and increased to 20% of total company sales, up from 14% of consolidated revenue in the same year-ago period.

Under Armour also only just launched its Under Armour Sportswear brand late last year, marking the company's long-awaited entry into the $12.5 billion sportswear market, which currently drives around 25% of Nike's total sales and provides a mammoth opportunity for incremental growth.

In addition, Under Armour has momentum on its side. Shares climbed nearly 14% last month, thanks to a combination of sponsored athlete (and two-time NBA MVP) Steph Curry's impressive performance in the NBA Finals ahead of the October launch of his new Curry 4 shoe later this year, as well as the more recent appointment of former VF Corp. executive Patrik Frisk to chief operating officer. The latter move will loosen founder and CEO Kevin Plank's grip on Under Armour. And according to Susquehanna analyst Sam Poser, it should both "finally decentralize some decision making within the company" and potentially bring a welcome review of Under Armour's global growth strategies.

Next, with its market capitalization sitting at just below $95 billion as of this writing -- or almost exactly 10 times the size of Under Armour -- Nike is obviously the more mature business. But that doesn't mean Nike is anywhere near done growing yet.

In fact, when Nike reported its latest quarterly results last week, it revealed that revenue had climbed a better-than-expected 5.3% year over year -- not too far below Under Armour's growth rate, even from Nike's larger base -- to $8.68 billion. Nearly $5.5 billion of that total, or 63%, came from Nike brand footwear, sales of which climbed 10% at constant currency worldwide. Nike also enjoyed 10% currency-neutral growth in Converse brand sales last quarter, to $554 million, making its $305 million acquisition of the retro shoe brand in 2003 look as savvy as they come.

Nike is, however, enduring similar headwinds as Under Armour in North America. The behemoth's domestic sales rose only slightly to $3.75 billion last quarter, as 4% growth in footwear was more than offset by a 2% decline from apparel and a 25% drop in equipment sales -- though the latter can be largely chalked up to Nike's strategic exit from the golf-equipment business last summer.

To that end, Nike revealed last week that it is piloting a new partnership to bring a limited product assortment to Amazon.com (NASDAQ:AMZN) in the U.S., leaving Wall Street to process a strange combination of giddiness and concern. On one hand, the move resolves a long-standing stalemate between the two companies, as Nike previously strived for online independence from the internet retail leader. And it could go a long way toward boosting Nike's North American growth. On the other hand, investors are rightly concerned that Nike won't be able to maintain its premium brand image -- and, therefore, its ability to command a premium margin -- through an Amazon storefront. Even so, Nike management has assured investors they are actively looking at ways to elevate their brand on what's arguably the internet's biggest retail stage.

Finally, keep in mind that Nike isn't shy about capital returns. In addition to paying a quarterly dividend that yields around 1.25% annually, Nike has repurchased 79.8 million shares for $4.4 billion under a four-year, $12 billion repurchase program authorized in November 2015.

In the end, I wouldn't mind owning both Under Armour and Nike in my personal portfolio. Both companies are strong and growing, boast widely recognized and respected brands, and show no signs of taking their feet off the gas pedal in the coming years.

But if I had to choose a stock to buy right now -- and keeping in mind I already own Under Armour C shares in my personal portfolio -- I would add to my position in Under Armour. That's not to say Nike won't keep rising from here, as its resources allow it to expand to new strategic geographies on a scale to which Under Armour can only hope to aspire. But I've watched (and taken advantage of) several other temporary plunges in Under Armour stock over the past decade. And though shares have already started to rebound from multi-year lows, I see no reason Under Armour won't eventually revisit and blast above its all-time highs as the company continues to build its global presence. So for now, I think Under Armour is the better buy today.