Swedish automaker Volvo Cars announced last week that every Volvo it launches starting in 2019 will have an electric motor.

That's big news. Your humble Fool was on vacation last week, but even so, I couldn't help noticing that Volvo's announcement created quite a stir. Would Volvo be the first global automaker to take on Tesla (NASDAQ:TSLA) with a fully electric lineup?

Alas for electric car fans, the answer is, "Not quite." Volvo did make a serious commitment to electrification, but more than a few commentators misunderstood exactly what it is that Volvo said it will (and won't) be doing in the next few years. Let's take a closer look. 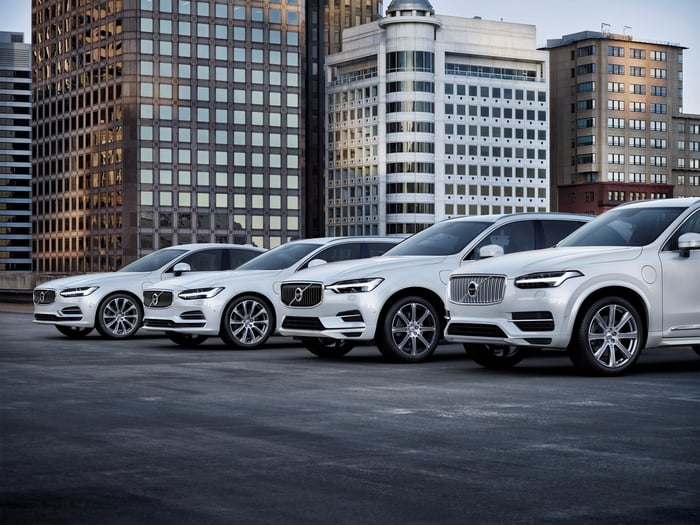 Volvo's press release didn't make any effort to tamp down the hype. On the contrary:

Volvo Cars, the premium car maker, has announced that every Volvo it launches from 2019 will have an electric motor, marking the historic end of cars that only have an internal combustion engine (ICE) and placing electrification at the core of its future business.

The announcement represents one of the most significant moves by any car maker to embrace electrification and highlights how over a century after the invention of the internal combustion engine electrification is paving the way for a new chapter in automotive history.

Sounds huge, doesn't it? But if you read a little further, you find what Volvo actually committed to do: Starting in 2019, every all-new model that Volvo introduces will be either a fully electric vehicle or a hybrid, including so-called "mild hybrids." (More on those in a bit.)

So what's the real deal here?

To be clear, Volvo did make a serious commitment to fully electric vehicles, probably more in response to tightening emissions requirements in the European and Chinese markets than to Tesla. (China is a more important factor here than you might think: Volvo Cars is owned by Chinese automaker Geely Automobile Holdings (OTC:GELYF).) 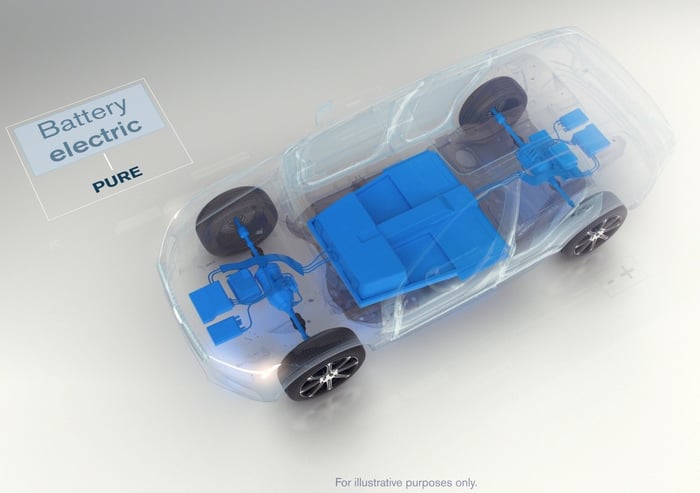 Volvo has five battery-electric vehicles under development. This illustration shows a dual-motor configuration with battery pack under the floor. Image source: Volvo Cars.

Volvo said that it will launch five battery-electric models between 2019 and 2021. Two of those will be high-performance models launched under Volvo's Polestar performance-car brand; the others will be Volvos. Other all-new Volvos will be hybrids. They may have gasoline or diesel engines, Volvo said, and at least some will be "mild hybrids."

While Volvo's announcement was pitched as a dramatic move, it builds on an earlier promise: Volvo said last year that it aims to sell 1 million "electrified cars" by 2025.

A mild hybrid system, sometimes called a "48 volt" system, replaces an internal combustion vehicle's traditional 12-volt battery with a more powerful 48-volt battery. Typically, that battery is used to power a small electric motor that assists the internal-combustion engine in some driving conditions. 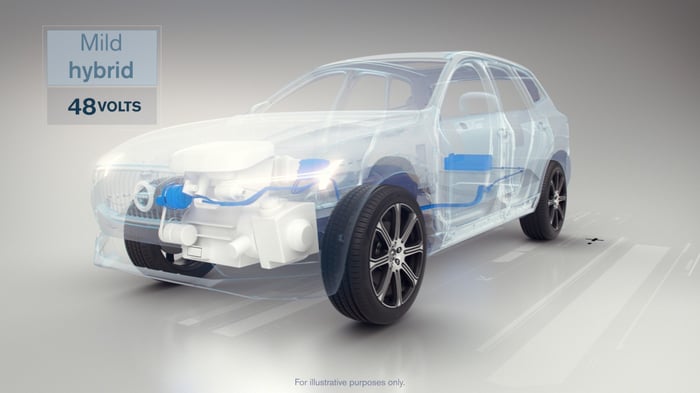 Mild-hybrid systems also often include a "start/stop" feature that turns off the combustion engine when the vehicle is stopped, and may include regenerative braking systems that can help charge the battery as well.

A mild-hybrid system is a way to make internal combustion vehicles more efficient at a fairly low cost. They'll likely become very common over the next five to seven years. But unlike mainstream hybrid vehicles, a mild hybrid can't ever run on electricity alone, so it's arguably a little misleading to put a mild hybrid in the same category as a fully electric vehicle.

Long story short: Volvo isn't turning into Tesla quite yet

Volvo's announcement is very significant in one sense: It's the first global automaker to explicitly say that it will phase out non-hybrid internal-combustion vehicles over the next several years. More broadly, when taken together with its substantial investments in autonomous-vehicle technology, it's evidence that Volvo Cars is working hard to stay competitive as technology transforms the way we get around. Another consideration: It's possible that these bold promises are laying the groundwork for a public offering of Volvo Cars' stock.

Of course, on substance, last week's announcement wasn't really earth-shattering; it's likely that most of the global automakers will transition most of their models to electric or hybrid powertrains (even if only mild hybrid) over the same general time period.

But by saying explicitly that it will move away from purely internal-combustion powertrains, Volvo Cars put itself at the leading edge of the trend -- and moved its brand perception a little closer to that super-cool Silicon Valley upstart.