Here's why growth investors should put Camping World Holdings, Facebook, and HubSpot on their radar.

With the S&P 500 trading near all-times highs, it is getting harder and harder to find growth stocks that are trading at reasonable valuations. However, that doesn't mean that every growth stock is too pricey to touch.

So what growth stocks do we think are great buys right now? We asked a team of investors to answer that question and they picked Camping World Holdings (CWH 6.58%), Facebook (META -1.07%), and HubSpot (HUBS -3.10%). 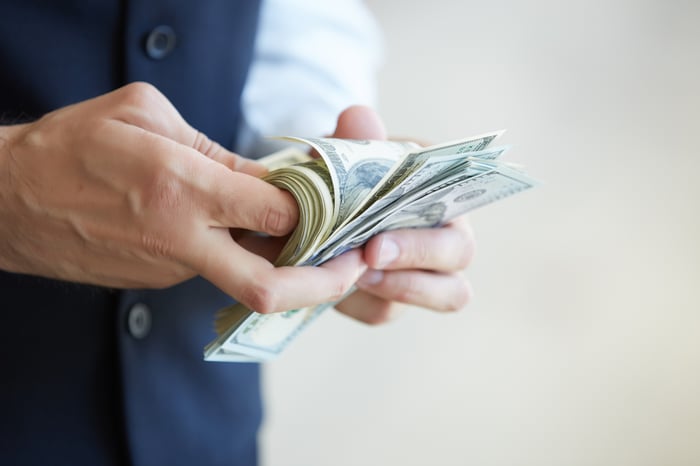 Reuben Gregg Brewer (Camping World Holdings): Growth is about to get a big boost at Camping World Holdings, but not as big as some might have expected. And that's a good thing. Camping World only came public late last year and is really only appropriate for more aggressive investors, but it happens to be one of the nation's largest retailers of recreational vehicles and related products and services. With baby boomers starting to hit retirement en masse, Camping World is well positioned to benefit from that massive generation's shift into yet another stage of life.

Camping World is in growth mode at what appears to be an opportune time. That means a lot of spending, stock offerings, and debt. That is why you shouldn't even look at this retailer if you can't handle a little risk. But it seems to be taking an opportunistic and measured approach to the process. For example, it recently bought certain assets of bankrupt outdoor retailer Gander Mountain (it sold stock to help pay for the deal, by the way). Camping World is going to rebrand Gander Mountain as Gander Outdoors to align with Camping World's focus on the "outdoor" lifestyle. 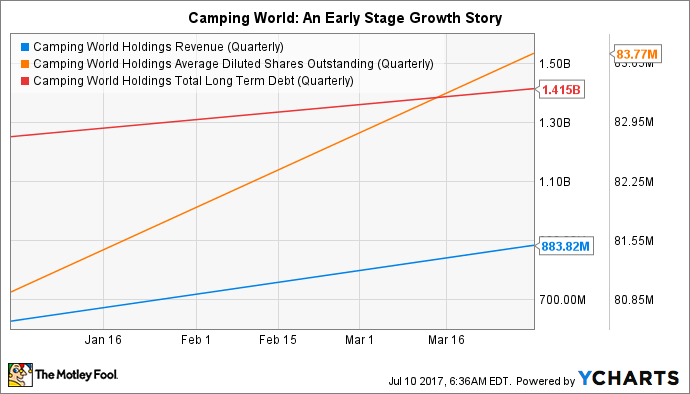 But here's the interesting thing: Camping World originally planned to keep around 70 locations up and running. In the end, however, it lowered that number to 57. As CEO Marcus Lemonis noted, "[W]e are not willing to open stores which we do not believe have a clear path to profitability." The goal is to use the acquired business as a growth platform, so look for more stores to show up over time. That said, going in, Camping World doesn't appear to be overextending itself in an effort to achieve growth for growth's sake.

Camping World's first-quarter results were solid, with revenue up about 11% and adjusted EBITDA up nearly 25% versus pro forma numbers for the year-ago period. With the acquisition of Gander Mountain, the top line is likely to see a notable uptick in the quarters ahead. And while the acquisition and stock sale could make the company's results harder to read for a little bit, management appears to be pushing the accelerator with some restraint to ensure it doesn't overextend itself. That makes this growing retailer's acquisition of Gander Mountain something of a canny move in my eyes.

Keith Noonan (Facebook): With Facebook already recording an incredible 2 billion monthly active users and comments from management indicating that ad sales growth will slow this year, there might be cause for concern as to whether the company can keep expanding at a rate that makes it a smart investment at roughly 31 times forward earnings estimates. Another way to look at it is that Facebook has managed to reach more than 55% of the roughly 3.6 billion people connected to the internet and that it stands a good chance of attracting new members as internet availability becomes increasingly ubiquitous.

Facebook's already massive user base means the company is looking to develop markets for user growth, and it's already having success on that front. In India, the company recently launched Express Wi-Fi, a partnership project that allows regional internet service providers to resell network connectivity and bring affordable internet service to areas that have previously not had it. Initiatives like these mean that more people will have access to Facebook's products, and with nearly 4 billion people still not connected to the web, there's plenty of growth potential beyond simply increasing engagement from its existing users.

A base of roughly 2 billion users for its namesake social media platform creates an incredible network effect, and the company's investments in emerging technologies like virtual reality and augmented reality suggest it's ready to continue shaping the evolution of social media. Facebook's growth potential is bigger than many seem to realize, and there's a good chance that those who underestimate it will wind up missing out on a rewarding long-term growth stock.

Brian Feroldi (HubSpot): The digital age has flipped the marketing playbook on its head. Consumers are increasingly skipping TV ads, blocking cold callers, and throwing away direct mail. Given these realities, how can companies possibly reach prospective customers?

This is a problem that HubSpot is helping companies all over the world to solve. HubSpot offers cloud-based software that helps companies to make better use of SEO, blogging, and social media platforms as a way to reach consumers. The company calls this strategy "inbound marketing" and the idea is that, by maximizing your presence in these new arenas, new customers will actively search for you.

HubSpot's messaging is clearly resonating with businesses. As of March, the company has attracted more than 31,000 customers to its platform. This figure was up more than 40% from the year-ago period and helped drive its top line 40% higher to $82 million. Better yet, the company even managed to eke out a small profit.

Looking ahead, HubSpot believes that it has barely scratched the surface of what's possible. According to management, its total addressable market is more than $45 billion, which, if true, gives this company a tremendous runway for future growth.

As you'd expect from a fast-growing company that has a bright future in front of it, HubSpot's shares are fetching at a premium valuation. HubSpot's price-to-sales ratio currently exceeds 8, which hints that traders have already priced in a lot of the company's future potential. Despite that fact, I think that the opportunity here is large enough to justify taking a small nibble on HubSpot's stock today.