Zynga (NASDAQ:ZNGA) was once the biggest name in social video games. Popular hits like FarmVille and Words With Friends racked up massive audiences and recorded stellar engagement, but the company's failure to innovate and keep pace with a rapidly changing industry led to declining relevance and the collapse of its stock. Now, the company is trying to orchestrate a turnaround that hinges on delivering hits in the mobile games space, and its stock has rallied more than 40% year to date on early signs that its pivot could be successful.

In order to better understand the company's comeback effort and place its current initiatives in context, let's take a look at the history of Zynga. 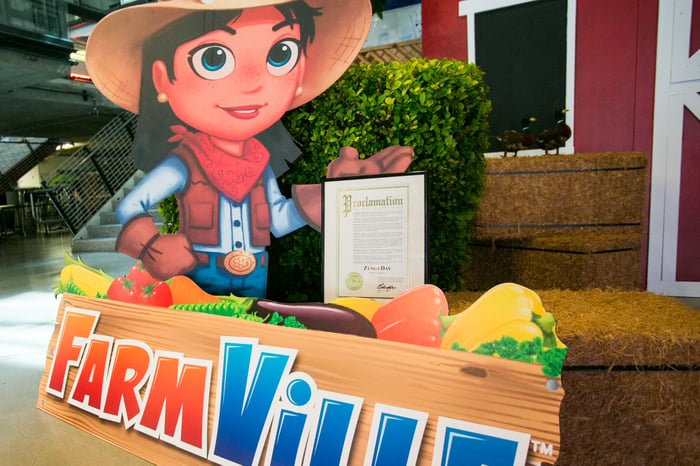 The early years of Zynga

Zynga was founded in 2007 by a team that included current chairman, and then CEO, Mark Pincus and hit the scene at a time when video games played through a web browser were experiencing rapid growth. The company released its first game, Zynga Poker, that year on Facebook (NASDAQ:FB), which at the time was emerging as a popular browser-based portal for social video games.

Zynga followed up its hit poker title with Mafia Wars -- a multiplayer game that revolved around players managing their own virtual crime syndicates. Both games used the free-to-play, or "freemium" model, which gave them wide audiences and generated sales from a small group of users who spent large amounts on in-game items and virtual currency. These high value users are sometimes referred to as "whales", and attracting and maintaining their interest was, and remains, Zynga's primary source of revenue.

In 2009, the company released its popular puzzle game Words with Friends. It also debuted FarmVille (a farming simulation game) on Facebook and later through its own browser-based portal. The game went on to be a huge hit, launch one of Zynga's most important franchises, and provide a framework from which many of the company's future games would be built. It's worth noting that the gameplay and visuals of both Mafia Wars and FarmVille were largely derivative of games from other developers, and Words With Friends is similar to the popular board game Scrabble.

The next year saw the company release CityVille, which went on to surpass FarmVille in popularity. By this time, Zynga was the most successful app developer on Facebook's platform and it had built a stable of successful properties, but cracks in its business were already forming due to tensions with Facebook over monetization schemes and the rising popularity of apps that ran on mobile and PC operating systems rather than browser portals.

In December 2011, Zynga listed 10 million shares at $10 in its initial public offering -- valuing the company at $9 billion and raising roughly $1 billion to make it the largest tech IPO since Google.

This company's public debut was followed by an earnings target hike and licensing deal with Hasbro to develop merchandise based on Zynga's game properties that helped push the software company's share price to its historic high in March and reach a roughly $10.5 billion market cap. It's been mostly downhill since then.

Facebook accounted for 86% of Zynga's revenues in fiscal 2012, but mobile games were supplanting browser-based alternatives with hit titles like Candy Crush from King Digital (now a part of Activision Blizzard) and Clash of Clans from Supercell (now owned by Tencent Holdings) emerging as the new favorites among casual gamers while FarmVille and other titles were shedding users. These shifts caught Zynga flatfooted and resulted in substantial and prolonged revenue declines. 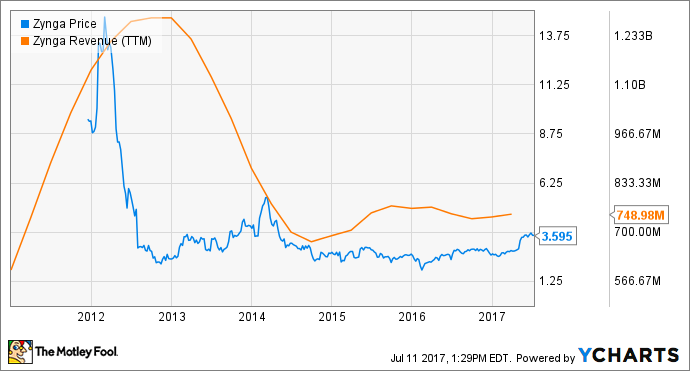 Mark Pincus left the company in 2013 following a string of disappointing releases and acquisitions and was replaced as CEO by Don Mattrick -- who had previously spearheaded Microsoft's Xbox 360 and Xbox One. Mattrick proceeded with the goal of speeding Zynga's transition to mobile, but his tenure would ultimately be defined by a poorly received update to Zynga Poker and a costly, underperforming acquisition. In 2014, the company bought developer NaturalMotion in a $527 million deal on the strength of a couple successful titles and its technology for simulating in-game physics, but the unit's subsequent releases haven't lived up to expectations.

Mattrick's 2014 compensation package of roughly $58 million in cash and stock made him the second-highest-paid CEO in the tech sector that year and attracted more media attention than many of the company's releases, but his run at the company was ultimately short lived. He stepped down in 2015 and was replaced by Pincus. This was also not to last, as Pincus left the chief executive role again in 2016 and was succeeded by current CEO, and former Electronic Arts mobile executive, Frank Gibeau.

Under Gibeau, the company is focusing on quickly reaching profitability by increasing monetization from its core games rather than devoting lots of resources to developing the next big mobile hit. So far, Wall Street seems to be liking the new approach.

What Zynga is working on now

Zynga's revenues remain far below where they were when browser games were still popular, but the company is posting solid momentum on the mobile front -- with its most recent quarter posting a 19% year-over-year mobile revenue increase to reach 83% of overall sales. The company still seems to be struggling to introduce successful new properties, but its performance has been lifted by strong results for the mobile version of Zynga Poker -- which grew sales 63% year over year in its most recent quarter. The company is also looking to grow engagement and sales from its Words with Friends and Slots franchises on mobile.

Keeping costs down and generating more sales from existing user bases across these two properties look to be achievable goals in the short term, but whether the company can deliver wins for long-term shareholders will likely hinge on its ability to grow its audience through the release of new hit games.