Markets were mixed on Tuesday, as positive moves for the Nasdaq Composite were offset by declines for the Dow Jones Industrials. Earnings were largely responsible for the Dow's pullback, as a high-priced financial stock in the average dropped after releasing its second-quarter earnings report and had a disproportionately large impact on the price-weighted benchmark. For the Nasdaq, strong quarterly results from the leading video-streaming specialist helped buoy investor sentiment. Overall, investors seemed content to tread water waiting for earnings season to kick into high gear.

Yet some stocks suffered from bad news, and Harley-Davidson (NYSE:HOG), Tile Shop Holdings (NASDAQ:TTSH), and Chipotle Mexican Grill (NYSE:CMG) were among the worst performers on the day. Below, we'll look more closely at these stocks to tell you why they did so poorly.

Shares of Harley-Davidson declined 6% after the motorcycle maker reported its second-quarter financial results. Revenue fell almost 7% on an even larger drop in domestic sales, and earnings were down despite substantial cost savings on reduced overhead expenses. More worrying was Harley-Davidson's guidance for the remainder of the year, which included a big downgrade in the number of motorcycles it expects to ship this year. Harley now thinks that shipments could drop 6% to 8%, compared to previous expectations for flat unit sales. As demographics continue to move against the industry, Harley-Davidson will have to fight to preserve its brand strength and to make its sales rebound. 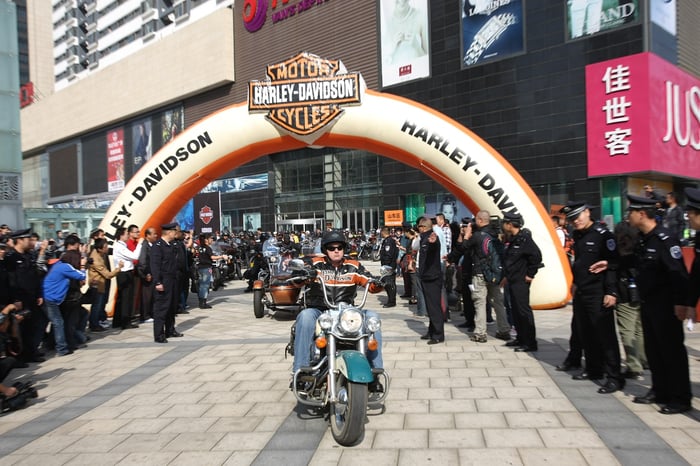 Tile Shop has a big miss

Tile Shop Holdings stock plunged 26% following the company's release of second-quarter financials. Revenue was up 6% compared to the year-ago quarter, and comparable-store sales were up just 0.5%, both dramatically underperforming what those following the stock had expected. Investors were also disappointed with earnings, which fell just short of expectations. CEO Chris Homeister remained optimistic about the future, noting that Tile Shop hopes to open another seven to eight new store locations by the end of 2017. Yet bottom-line guidance for adjusted earnings of $0.49 to $0.56 per share left the consensus forecast among investors near the top end of Tile Shop's expected range. After setting strong expectations with its solid report last quarter, Tile Shop will have to work hard if it wants to recover today's losses.

Finally, shares of Chipotle Mexican Grill took a 4% hit. The Mexican fast-casual chain temporarily closed a restaurant in a suburb of the nation's capital following reports of a foodborne virus. The news resurrected fears from two years ago, when Chipotle suffered its first battle against reports of food-related illnesses, and investors had hoped that the company would act aggressively to deal with quality control issues and restore confidence in the Chipotle brand. Instead, negative reaction to the latest incident has been fast and furious. Going forward, it's uncertain how many more chances customers will be willing to give Chipotle. At some point, Chipotle could lose those formerly loyal diners, and that would make a bad situation even worse.