The nascent market for wearable technology has been brutal, and the latest company to throw in the towel is none other than chip giant Intel (NASDAQ:INTC). CNBC reports that Intel has shuttered its division that was working on wearable devices, laying off upwards of 80% of employees in the group. Some of these employees were able to move to other departments internally. TechCrunch had previously reported that Intel was shifting its focus away from wearables, but Intel denied the report at the time. Here's the statement that Intel provided TechCrunch in November:

Intel is in no way stepping back from the wearables business. In fact, we have several products in the works that we are very excited about, as well as prior launches that highlight our wearable technology such as the TAG Heuer Connected watch and recent Oakley Radar Pace smart eyewear.

Over the past few years, Intel has acquired a couple smaller companies in an effort to bolster its wearable street cred. It bought Basis (which made a fitness tracking watch) in 2014 for an estimated $100 million to $150 million, followed by Recon Instruments (which made a fitness-oriented smart glasses) for an estimated $175 million. That's an awful lot of money that might need to be written off now. 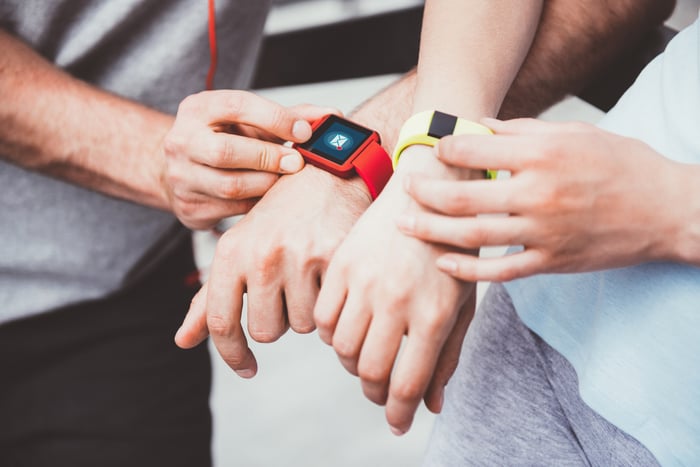 Intel's exit is but the latest in a long string of companies that have given up on wearables. Nike was among the first, discontinuing its FuelBand in 2014. It now focuses more on fitness apps and services. Numerous prominent consumer electronics manufacturers gave Alphabet subsidiary Google's Android Wear a shot, but many of those OEMs like ASUS and Motorola are calling it quits.

Microsoft killed its Band 2 last year. After years of losing market share, privately held Jawbone is done with consumer wearables and wants to pivot toward clinical services. Pebble was on its deathbed, and Fitbit (NYSE:FIT) put it out of its misery; Fitbit also reportedly considered acquiring Jawbone, too. The list goes on.

At this point, two of the more prominent players remaining in the wearables space are Fitbit and Apple (NASDAQ:AAPL). Xiaomi, Garmin, and Samsung are also among the remaining top players in terms of unit volumes. Fitbit has been under pressure as it struggles to move upmarket with a full-featured smartwatch. It's safe to say that Apple Watch is dominating the smartwatch market, which is in part a function of other companies exiting. Apple still won't disclose specifics beyond suggesting that its overall wearables business is now a $5.1 billion business (but that includes wireless headphones).

If and when Fitbit releases a smartwatch, its prospects are still uncertain, since the broader problem -- one that even Apple is having trouble overcoming -- is that smartwatches still lack a killer mainstream use case. For what it's worth, market researcher IDC is still bullish on the wearables market, expecting it to double by 2021 to 240 million units, mostly concentrated in the smartwatch category. Let's see if that forecast proves overly optimistic.