Investing guru Warren Buffett's favorite holding period is "forever." It isn't easy to find stocks that qualify for that kind of long-term confidence, but these five companies fit the bill for me. Read on to see why I'm not likely to sell off my real-money holdings in Netflix (NASDAQ:NFLX), Alphabet (NASDAQ:GOOG) (NASDAQ:GOOGL), Red Hat (NYSE:RHT), Walt Disney (NYSE:DIS), or Amazon.com (NASDAQ:AMZN) anytime soon -- and maybe not ever. 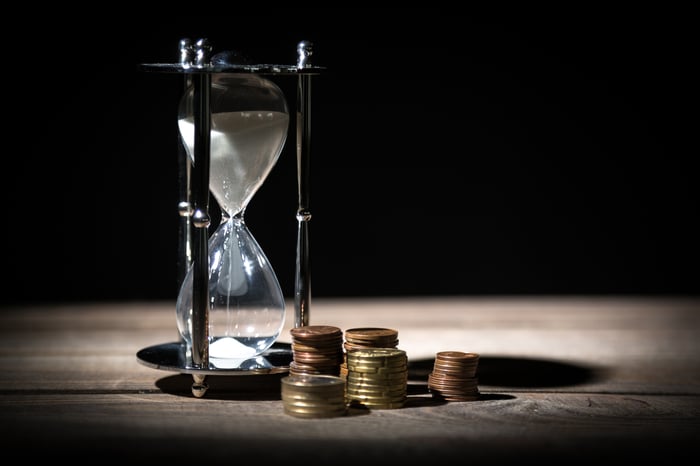 Building a beautiful conglomerate from A to Z

The company formerly known as Google is itching to outgrow its online search-and-advertising history. Under the Alphabet umbrella, the company is exploring long-term growth markets such as self-driving cars, the end of human aging, and smart home appliances. The depth of Alphabet's non-digital ambitions is impossible to cover in a short article like this one; suffice it to say that the company is changing gears in a very significant way.

Some of the game-changing "Moonshots" will surely fail and fall by the wayside, but enough of the seemingly wild bets will pay off. The Alphabet of 2027 and 2037 won't look anything like the online giant you know today. Sure, the Google and Android brands will stick around for many years, or even decades, but Alphabet is using the capital from Google's success to build a cross-industry conglomerate for the ages.

The company famously pledges to "Focus on the user and all else will follow." Alphabet also believes that "Great just isn't good enough." This company is in business to change the world for the better, and I want to be a part of that vision.

Disney is no Mickey Mouse operation

With great brand power comes great responsibility. The House of Mouse has been an excellent steward of the world's most recognizable entertainment brand, and is setting itself up to stay relevant for decades to come.

Built on a platform of beloved entertainment brands like Mickey Mouse and the Disney Princesses, the company has created an unmatched collection of monetizing strategies. From theme parks and cruise ships to licensed lunch boxes and pajamas, Disney never met a money-making opportunity it didn't like.

Management has never been afraid to broaden its horizons with a strategic buyout. When Pixar threatened to overthrow Disney's dominant hold on the animated-movie market, the company was made an offer it couldn't refuse and is now the heart and soul of Disney's animation strategy. Marvel Entertainment can tell a very similar tale, giving Disney an important foothold in the superhero market for older kids. The Lucasfilm buyout was another completely sensible play for big kids and for adults with a nostalgic yearning for the Star Wars Universe.

Other key acquisitions by this buyout-hungry company include sports TV network ESPN, major TV network ABC, the Muppets brand, and India-based broadcasting giant UTV Software Communications. I expect Disney to keep an eye out for both audacious brand-building buyouts and sensible plug-in acquisitions in the future.

I fully expect my great-great-grandkids to grow up with Mickey Mouse, Iron Man, Cinderella, and dreams of Disney World vacations. This is a stock for the ages.

Welcome to the jungle

On the topic of empire building, Amazon stands out as an easy choice. The e-commerce giant is disrupting several industries at once. Amazon shepherded its first-mover advantage in the online shopping market into a retail-toppling behemoth. But that's far from the whole story.

The company also offers a wide-ranging portfolio of cloud-computing services under the Amazon Web Services brand, or AWS. That division accounted for 9% of Amazon's total sales in 2016, up from 5% just two years earlier. It also is a hugely profitable operation, accounting for 74% of Amazon's operating profits last year.

We're talking about a visionary company with $143 billion of trailing revenues and year-over-year sales growth of more than 22%. Founder and CEO Jeff Bezos keeps his investments in rocketry and media publishing separate from Amazon itself, but it's clear that he has larger ambitions than simply dominating retail and cloud computing.

I'm coming along for that ride.

The future of business computing

Red Hat is the smallest company on this list, and certainly less of a household name than Amazon or Disney. But if you have had any exposure to enterprise computing at all over the last decade or so, you've certainly seen the name.

A longtime vendor of Linux-based computing platform Red Hat Enterprise Linux, Red Hat has expanded into many other business-grade software markets. Right now, the biggest growth drivers on the table include the OpenStack and OpenShift cloud-computing platforms.

This company turns the enterprise-computing market on its head by relying on an open-source development model. This keeps research and development costs low without sacrificing code quality, and also lets Red Hat give the software away, while charging a rich premium for support contracts.

In my eyes, this is the future of business computing. Red Hat and its open-source peers have already nudged IT giant Microsoft in that direction, kicking and screaming. The financial results are downright inspiring: 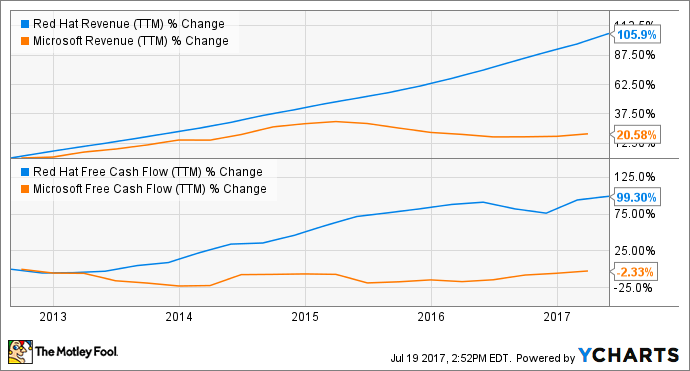 Finally, Netflix is the largest and most successful holding in my personal portfolio -- and the streaming-video pioneer is only getting started. The company boasts 104 million streaming subscribers so far, but the addressable market is expanding by leaps and bounds. Broadband internet access is becoming widespread around the world, and you might be shocked at the number of people who are able to afford a low-cost entertainment option like Netflix.

I wouldn't be surprised to see the company managing 200 million global subscribers 10 years from now, with annual revenues topping $30 billion. Along the way, Netflix is creating a strong portfolio of TV series and movies. We're witnessing the early days of a worldwide entertainment giant for the long haul -- very much like Disney, but without the family friendly attitude.