Shares of AK Steel (NYSE:AKS) slumped on Friday and were down nearly 9% by the closing bell. It wasn't alone, as U.S. Steel (NYSE:X) and Nucor (NYSE:NUE) also sold off on the day, down 8% and 2%, respectively. Fueling the sell-off are growing worries that President Donald Trump might not be able to use his authority to restrict steel imports as quickly as expected, if at all.

This past April, Trump instructed Commerce Secretary Wilbur Ross to decide if the president could implement Section 232 of the Trade Expansion Act of 1962, which would allow him to restrict steel imports if the Commerce Department finds those imports to be a threat to national security. Such a restriction would be a boon to American steel producers AK Steel, U.S. Steel, and Nucor, which is why those stocks soared after the election. 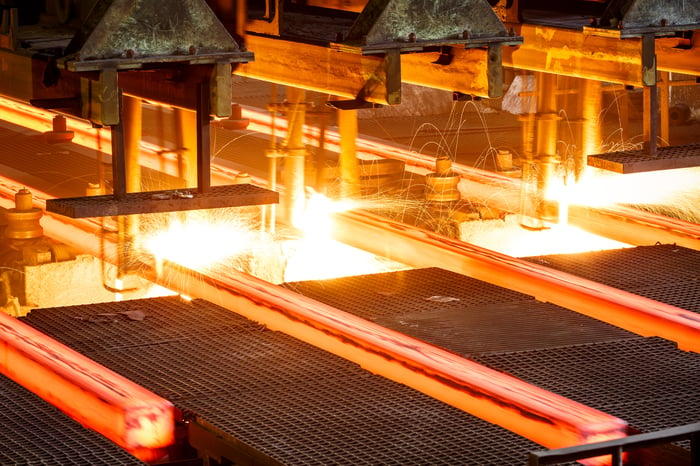 That said, the Department has already missed its 270-day self-imposed deadline, and on Thursday Ross stated that the process had gotten bogged down in "complexity." As such, yesterday an analyst at Longbow Research downgraded AK Steel and U.S. Steel from buy to neutral. In doing so, the analyst cited the stocks' elevated valuation and limited pricing visibility as a result of the growing concerns that Trump might not act to curb imports.

Adding to those worries are weaker auto sales and the fact that the U.S. drilling rig count seems to be peaking, which could weigh on steel demand in the country. Those two factors led an analyst at Citi to downgrade U.S. Steel today, cutting it from neutral to sell while slashing its price target from $26 down to $20. That report is weighing on the entire steel sector today as the S&P 1500 steel index is down 3.5% and at its lowest level in two weeks.

Steel stocks were riding high earlier this week after most companies in the industry reported excellent second-quarter results, with Nucor, for example, delivering its best first-half profit since the Great Recession. However, investors have quickly realized that those profits might not be as robust in future quarters, which is leading to some profit-taking today. There could be more downside ahead given that it doesn't appear that Trump will come to the sector's rescue anytime soon.